Dewey Does It: Hailing One of Crime Fiction’s Underrated Stars 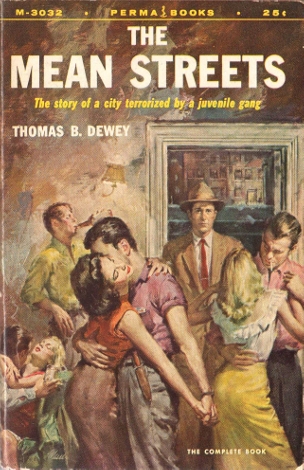 Years ago, during the one and only opportunity I had to interview detective novelist Ross Macdonald, I asked him whose work in the same genre he most enjoyed reading. Unfortunately, I no longer have the tape recording of our exchange (which was of pretty poor quality, anyway; Macdonald spoke quite softly). I do, though, recall a pair of names he mentioned, two authors whose books I had not then read, but have since investigated eagerly: William Campbell Gault and Thomas B. Dewey. The former created Los Angeles private eyes Joe Puma (Sweet Wild Wench, 1959) and Brock Callahan (The Convertible Hearse, 1957). The latter—not to be confused with Thomas E. Dewey, the 1948 Republican presidential nominee who (contrary to the assertion made in an infamous Chicago Tribune headline) lost to incumbent Harry Truman—left behind some three dozen novels, most of which are carefully plotted, character-propelled gumshoe tales featuring one of two protagonists: the memorably compassionate Mac, or the happily wed Pete Schofield.

Thomas Blanchard Dewey was born in Elkhart, Ind., in 1915. But according to The Encyclopedia of Mystery and Detection (1976), edited by Charles Steinbrunner and Otto Penzler, he “traveled widely in the Midwest when he was a child; he lived in Ohio, Michigan, and Illinois and attended school in Kansas and Iowa.” Dewey reportedly held a variety of writing and editing positions in his younger days, including a stretch with the U.S. State Department, a turn as the editor for a correspondence school and several years spent on the payroll of a Los Angeles advertising agency. He later taught English at Arizona State University.

His first published novel, 1944’s Hue and Cry, introduced readers to Singer Batts, a Shakespearean scholar, passionate bibliophile and reluctant sleuth who owns a small hotel in fictional Preston, Ohio. Like Rex Stout’s Nero Wolfe, Batts “is given a full slate of eccentricities,” observed critic Jon L. Breen in his Dewey profile for the Summer 2008 issue of Mystery Scene magazine: “[H]is hobby is studying historical murder cases; he compulsively writes to lonely-hearts clubs; in deliberate reversal of the Wolfe pattern, he is painfully thin owning to a tendency not to eat; he drinks only to face contemporary murder.” Also like Stout’s corpulent orchid aficionado, Batts benefits from having a hard-nosed helper, in his case hotel manager Joe Spinder. Dewey went on to concoct three more Batts/Singer escapades, the last being 1951’s Handle With Fear. Even before that book saw print, however, he had begun developing another character who’d become a much better remembered member of the fictional snoop’s society.

“Mac” may be the most democratic, ordinary moniker imaginable, and it’s the one Dewey gave to the shamus he introduced in 1947’s Draw the Curtain Close (aka Dame in Danger). A Chicago slum kid who grew up to become a cop, Mac was eventually booted from the force for solving a crime that someone with greater influence wanted quashed. He des

cribes himself as “just a guy. I go around and get in jams and then try to figure a way out of them. I work hard. I don’t make very much money and most people insult me one way or another.” He’s a methodical investigator, a man of integrity, decency and honor who—unlike a few of his fictional fellows—resists using guns or fisticuffs in his job, though he can deftly employ both if necessary, and has a notable capacity for punishment when neither can protect him. “Mac is one of the most humane PIs in modern fiction…,” opined Robert Allen Baker and Michael T. Nietzel in their 1984 publication, Private Eyes: One Hundred and One Knights—A Survey of American Detective Fiction, 1922-1984. “When Mac gets to know his clients and the other people in his cases, he cares about them and tries to provide not only justice but counsel and guidance as well.” That determination to save folks has provoked comparisons between Mac and Ross Macdonald’s similarly empathetic protagonist, Lew Archer. Like Archer, too, Mac is given little in the way of back story or personal crises. He exists as a lens through which we witness the fate of his clients, and it’s his cases that seem to give his life meaning.

So often, the cases that matter most to Mac involve young people. In A Sad Song Singing (1963)—one of this series’ finest entries—he’s hired by a runaway teenage blonde whose musician boyfriend has gone astray, leaving her to protect his battered suitcase from covetous thugs. Mac takes her under his wing as they search Illinois’ humbler music venues for the peripatetic guitarist. (That novel was subsequently adapted for television—one of two Mac yarns to receive such treatment, the other being 1953’s Every Bet’s a Sure Thing, which became a 1971 episode of Cannon.) In The Case of the Chased and the Unchaste (1958), our hero heads to Hollywood to protect the precocious 5-year-old daughter of a film producer from being kidnapped. And in The Mean Streets (1954)—a title echoing one of Raymond Chandler’s most famous quotes, from his essay “The Simple Art of Murder”—Mac, posing as a high school baseball coach, tries to infiltrate a small-town juvenile gang and unmask the mastermind behind its violence. Dewey never shows his man doing any actual coaching, but Mac certainly gets around the local youth haunts, as he probes the slaying of a clean-kid pitcher, faces off against an aspiring delinquent and is framed with the statutory rape of a “sultry siren.”

Critic Breen, writing this time in 1993’s The Fine Art of Murder: The Mystery Reader’s Indispensable Companion, counts The Mean Streets among the 25 best private-eye novels of all time. I won’t argue, though its post-war drug-culture backdrop dates the work rather conspicuously. But let me also recommend three other fine Mac outings: Deadline (1966), which finds the Windy City peeper racing to unearth evidence enough to save a young convict from execution; The King Killers (1968), in which he tries to collect on an unpaid bill for defective wooden guns, only to wind up working with another gumshoe and exposing a neo-Fascist group; and The Love-Death Thing (1969), casting Mac into the patchouli-scented midst of the 1960s hippie scene.

While Dewey’s 16 Mac novels are pretty thin on humor and the wisecracking dialogue that was so popular in gumshoe tales of the mid-20th-century, the nine volumes comprising his second series are far more lighthearted. Hell, they’re even screwballish on occasion. The featured player here is Pete Schofield, a handsome 30-something PI based in Los Angeles’ San Fernando Valley. Unlike most of his fictional brethren, Schofield has a wife, the frisky, gorgeous and copper-topped Jeannie, who regularly helps him solve cases. Women still throw themselves at Schofield on a regular basis, but he—being the superhumanly faithful sort (despite Jeannie’s concerns in that arena)—manages to fend off their advances without disregarding their attributes. As the old saying goes, “He’s married, not blind.”

Dewey introduced this pair in And Where She Stops (1957), ultimately concluding their adventures in Nude in Nevada (1965). In bet

ween, there are several novels worth sampling. 1963’s The Girl with the Sweet Plump Knees (how can you resist a yarn bearing such a title?) opens with Pete being called away from a round of sexual office antics with Jeannie, so he can bodyguard the recently threatened girlfriend of his championship-pursuing boxer pal. Along the way, Pete is attacked and the girlfriend vanishes, kicking off a mystery that incorporates mobsters, a slain exotic dancer and a sports scheme that’s something less than cricket. Go, Honeylou (1962) has Pete accepting $500 from a Texas tent-revival preacher to escort his too-trusting, far-too-comely 19-year-old niece, Honeylou, to San Francisco and deposit her there with her “aunt” Cindy. Along the way, he’s clobbered, and both Jeannie and Honeylou are snatched, setting off a race to the Golden Gate that will end in homicide and the trio’s imprisonment in a backwoods cabin. Finally, The Golden Hooligan (1961) gives us a deceased bullfighter and a drug-smuggling operation on the California/Mexico border.

The Schofield books sometimes stretch a bit for credibility, but they’re solidly plotted, their madcap aspects keep you entertained even when you’re sure you know how everything will turn out, and the playful banter between Pete and Jeannie is out-and-out fun. If I didn’t know that the same author was behind both these frolicsome whodunits and the Mac investigations—which New York Times critic Anthony Boucher said exemplify “the depth, warmth and bite that is possible in intelligent use of the disciplines of the ‘hard-boiled’ school”—I’d never have guessed it.

It’s been 33 years now since Thomas B. Dewey passed away, and his books (including those he published as “Tom Brandt”) all appear to be out of print. As I’ve done over the decades, you’ll have to scrounge around used bookstores to find copies, or search for them on the Web. But, as Ross Macdonald knew, the effort is worth it. Dewey, declared another PI novelist, Bill Pronzini, was “one of detective fiction’s severely underrated writers.”

J. Kingston Pierce is both the editor of The Rap Sheet and the senior editor of January Magazine. You can link here to previous entries in his “rediscovered reads” series.