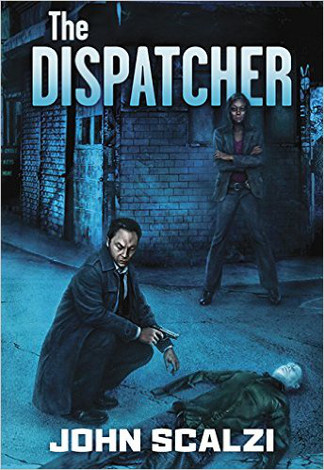 Imagine a world indistinguishable from our own, save for one quirk: death has been conquered. (Sort of.) People who are murdered disappear seconds after being killed and wake up at home in their beds, naked as the day they were born, moments later. Their bodies are restored to their 24-hour-ish pre-death condition, and miraculously, they get to live their full lives without incident.

Well, almost everyone who is murdered wakes up at home safe and sound. There is a one in one thousand chance that you won’t wake up again—but it’s a chance that practically everyone is happy to take.

In such a world, Dispatchers are needed. Psychologically tested and government licensed, Dispatchers have a simple job: to kill people in order to save their lives. When a surgery goes wrong, Dispatchers are there to ensure the patient gets a second chance. When a woman is accidentally hit by a bus and slowly bleeding out on the street, a Dispatcher is able to end her suffering and restore her to pre-bus-hit form. You get the picture.

Tony Valdez is one such Dispatcher, working at a hospital and dispatching a patient when he gets a visit from Detective Nona Langdon. It turns out a fellow Dispatcher, Jimmy Albert, has disappeared under suspicious circumstances, and hasn’t turned up alive and miraculously unharmed at home. Turns out Jimmy, like our protagonist Tony, has been running a few side hustles in order to make that paper. Some of those side hustles aren’t as straightforward, or as above-board, as the state-sanctioned hospital gigs—including illicit fight clubs, rich college bros who like playing with swords, and even the mob. Reluctantly, Valdez helps Langdon gather answers to find his friend before it’s too late.

Reading John Scalzi is always fun, and The Dispatcher is no exception. Originally released as an Audible-exclusive audiobook (narrated by Zachary Quinto, no less), the novella has just been released in prose form this month. It’s an interesting contrast, going from audio-to-book instead of the other way around—The Dispatcher is dialogue-heavy and descriptive-light, with a good heaping of action and natural breaks that would lend themselves well to the audio experience. The only thing really missing from this version (and present in Quinto’s actorly intepretation), is a sense of Valdez’s character and voice. In the book, Valdez’s narration is succinct and matter-of-fact, with a few good typical Scalzi jokes thrown in—but he’s missing the bite and nuance of Quinto’s version. (On the plus side, the print version includes illustrations which aren’t present in the audio edition.)

In all other aspects, however, The Dispatcher delivers. A simple, if intentionally contrived, premise is taken to extremes in this novella, provoking all kinds of questions: what happens if someone dies of natural causes? How would society react to these changes, when murder victims (or rather, those who die accidentally at the hands of others) can be resurrected—what happens to murder charges, or those already incarcerated for the crime? How the hell can the mob or any other gang that relies on threat of death operate in such a world? What extent of shady deals can Dispatchers take on in such a world?

There are, frustratingly, no answers in The Dispatcher; we never know why murdered folks start reappearing moments later, or why that one-in-a-thousand person who is dispatched just dies and isn’t resurrected. There’s some theological discussion and debate about morality—I just wish there were a little bit more. With any luck, there will be future adventures of Langdon and Valdez in the future.

In Book Smugglerish, 6 and a half sides of a polyhedra out of 10.