The Dreams of Gods 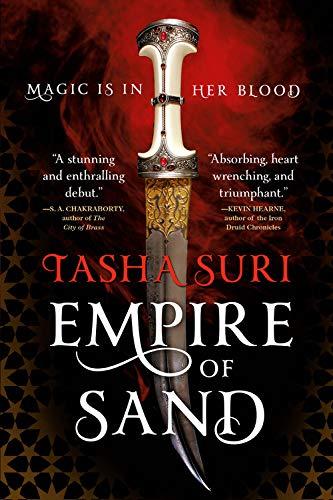 Mehr is a woman of two worlds: the Abhan and the Amrithi. The daughter of a well-connected Abhan nobleman and a powerful Amrithi woman, Mehr’s very existence is remarkable. In the glorious Empire, the Abhan are the ruling class of leaders, governors, and nobility, while the Amrithi are descendents of the daiva, the old elemental desert gods, and their blood contains some of the gods’ powers. For this power, the Amrithi are scorned and outcast, living as nomadic tribes in the great stretch of desert that surrounds the Empire. Their blood is both desired for protection and reviled for its ties to the slumbering heathen gods whose power threatens the very earth itself. Ever since the Maja—the first Emperor, now powerful and ageless—tamed the gods for the glory of peace, prosperity, and stability, the old daiva are reviled as wraiths and superstition; the only god the Empire demands is its Maja.

For Mehr’s mother and father to fall in love was unlikely; for them to have not just one but two children together, stranger still. After years of remaining with her children and her lover, Mehr’s mother eventually was exiled and forced to return to her Amrithi tribe in the desert—leaving Mehr and her younger sister alone in a world that cannot understand their existence.

For years, Mehr has grappled with her identity, holding firmly to her Amrithi heritage, learning to perform the rites and dances of her mother’s people. She does all this even though it earns her the mistrust and rage of her stepmother and other Abhan servants and nobles alike. Her father, out of guilt and love, allows Mehr to do as she chooses as long as she stays in line and out of sight.

When the first daiva storm brews on the horizon, Mehr is ecstatic—her whole life she has hungered to dance the Rite of Dreaming during the dreamstorm, honoring her tribe, ancestors, and gods. The dance is powerful and desperate and unlike anything Mehr has ever felt before—she feels the daiva in her blood for the first time. Unfortunately for Mehr, dancing the Rite of Dreaming means that she is no longer a secret. The Maja has felt her presence and sends his mystics to her father’s home with an imperial decree. Mehr is to marry his acolyte, and be taken to the far reaches of the desert to work magic for the good of the Empire.

When Mehr meets her bridegroom, when she learns the truth of the Maja’s power and the fate of her fellow Amrithi, she becomes enraged and terrified. The Maja may have Mehr’s life wrapped in bindings—but Mehr, with the help of her new friends and husband, will fight back. For the good of everything and everyone she loves, Mehr will fight the gods themselves.

Empire of Sand is the impressive debut fantasy novel from Tahsa Suri, inspired by India’s late medieval Mughal Empire, Bollywood films, and Suri’s own culture. From a worldbuilding perspective, Empire of Sand is phenomenal—this is a world complete with ancient sleeping gods, rich historical context, and diverging religions, cultures, and people. The divide between the Amrithi and the Abhan people runs from appearance (the Amrithi are darker skinned) to the gap between the power of the Amrithi blood and the importance of each group's customs, rites, and rituals. Some of the best moments in Empire of Sand are the ones that make these distinctions clear. For example, the power that Abhan noblewomen have in selecting their husband and giving their consent, or the Amrithi importance of ritual dance, sigils, and the feeling of worship and connection through physical form.

Another positive in Empire of Sand is its focus on the many relationships that exist among women, and the definitions of family and clan. I loved the many versions of mothers in this story—from Mehr’s spiteful stepmother (who is a fascinating character and at times sympathetic in her own right), to Mehr’s self-found clanmate in Lalita (an Amrithi woman who is passing, and working as a courtesan to rig powerful Abhan men). When Mehr finally reaches the Maja’s stronghold in the deepest part of the desert, she makes a new kind of family with some of the women mystics. Each of them have their own internal power struggles and desires, but largely this is a supportive group of women bound together by their service to the Empire. And that's pretty cool to read.

Where Enpire of Sand loses some ground, however, is with it's characterizations. Mehr is strong and selfless and powerful (of course), while her bridegroom, Amon, is tall, strong (physically and magically), and seen by all as a monster (of course he's not and of course he and Mehr fall hopelessly in love—so much so that their own love bond literally is the magic that saves the day). The married-to-a-stranger-who-turns-out-to-be-the-love-of-your-life trope isn't my favorite, and while I appreciate that Amon and Mehr bond slowly, united by the shared torture, fear, and heresy they endure, the power of love ending felt predictable, boring, and formulaic.

And on that note, the novels last act builds to an abrupt climax, in which the defeat of evil is surprisingly fast and altogether anticlimactic. Empire of Sand is the first book in a series, although I'm a little skeptical as to how and where the story goes from here.

Skeptical or not, I’ll be back to pick up Mehr’s next adventure and certainly recommend her first one.

In Book Smugglerish, 7 Amrithi daggers out of 10.