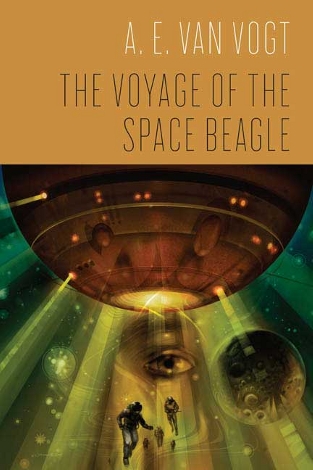 Walk into any bookstore, and you’ll likely find a section marked “Science Fiction and Fantasy” with the latest hardcover and paperback reads displayed; and it’s now a common thing to come across someone reading an SF/F book. This hasn’t always been the case, however. As we’ve seen in earlier columns, dedicated science fiction got its start in pulp magazines, ranging from Amazing Stories to Astounding Science Fiction, with authors such as Edgar Rice Burroughs and E.E. "Doc" Smith writing serialized stories. Following World War II, the marketplace for fiction began to shift, with cheaper paperbacks growing in popularity over the magazines which they replaced. Short fiction authors such as A.E. Van Vogt began to take their fiction and expand it into a novel length works to compete with the shifting formats around them.

Alfred Elton van Vogt was born in Winnipeg, Canada, on April 26th, 1912, growing up as an introverted child who fell in love with reading early on. At the age of 14, he picked up the November 1926 issue of Hugo Gernsback’s Amazing Stories, and began reading every issue from then on. He noted that “reading science fiction lifted me out of the do-be-and-have world and gave me glimpses backward and forward into the time and space distances of the universe.” He fell in love with the stories of E.E. “Doc” Smith and A. Merritt. Unable to afford college, he entered the workforce and took a creative writing course, and then began writing stories for women’s magazines, selling his first story to a magazine called True Story in 1932. After a while, he decided to return to his original love: science fiction. Inspired by John W. Campbell Jr.’s story “Who Goes There?,” he wrote up a similar story and sent it to the editor at Astounding Science Fiction. His first published short story, however, was “The Black Destroyer,” about an alien monster that boards the space ship Beagle and begins to kill off its crew. The story was featured as the cover story in the Campbell’s landmark July 1939 issue of Astounding, where it promptly became one of the most popular stories published by the magazine.

“The Black Destroyer” drew upon Oswald Spengler’s work The Decline of the West, which postulates that civilizations evolve and change like organisms, and is quoted by one of the ship’s archaeologists, Korita, in the story. Fittingly, the story came on the centennial of Charles Darwin’s Beagle voyage in 1939. Bolstered by the success of the first story, van Vogt decided to return to the world of “The Black Destroyer” and rewrote his first story, “Vault of the Beast.” Retitled “Discord in Scarlet,” it was published in the December 1939 issue of Astounding Science Fiction. It would be four years before Van Vogt returned to the Beagle setting, publishing “M 33 in Andromeda” in Astounding’s August 1943 issue. A final story, “War of Nerves,” found a home in Other Worlds magazine in May 1950.

Over the course of the late 1920s through the 1940s, pulp magazines reigned supreme. Cheaper printing techniques, excellent distribution networks and a readership with a higher disposable income led to hundreds of niche-genre magazines throughout the United States. The proliferation of titles are frequently maligned for their lackluster quality and abysmal pay rates for authors, but were responsible for sparking the careers of hundreds of authors during the Golden Age of Science Fiction. The bubble eventually popped, and by the end of World War II, new changes in printing technology brought the paperback novel to bear. In response, readers began to abandon the pulp magazine market for the paperback novel market.

This left many science fiction authors caught in a hard place: Many had come to depend on the large number of magazines on the market that would pay them for their work, and as readership declined, so too did the places in which to publish original fiction. The result was an innovative solution: repackage a number of preexisting short stories by adding to or rewriting portions of them to work together as a single story. This type of book, coined a “fix-up” by van Vogt, became a popular outlet product for science fiction authors, including Isaac Asimov (Foundation, I, Robot), Ray Bradbury (The Martian Chronicles, Fahrenheit 451), Leigh Brackett (Alpha Centauri or Die!), Jack Vance (The Dying Earth) and, of course, A.E. van Vogt.

In 1950, van Vogt put the four stories together into a novel titled The Voyage of the Space Beagle, which followed the adventures of a spaceship frequently under attack by alien threats, alongside internal crew divisions. The science fiction dictionary Brave New Worlds defines a “fix-up” novel as “[a] novel composed of previously-written shorter works, frequently with additional material to smooth the transitions between novels.”

The Voyage of the Space Beagle is just one representative example of the “fix-up” novel, and it wasn’t van Vogt’s last: Additional fix-ups include The Mixed Men, The Weapons Shops of Isher, War Against the Rull, The Beast, Rogue Ship and others. By the mid-1950s, dedicated publishers such as Ace and Ballantine had begun to take advantage of the marketability of a paperback novel, introducing their own lines of original novels that drew in a new generation of authors throughout the middle of the century.

Van Vogt’s reputation in the genre has flagged over the years. Adam Roberts notes that he “has few champions among academic critics of the genre; many dismiss as merely incoherent his intricately but discontinuously plotted novels.” To be sure, The Voyage of the Space Beagle is an exuberant novel that feels as though it’s more at home with television science fiction than that of its literary counterparts from the era. Critics have noted that there are similarities between the book and the planet-of-the-episode television shows such as Star Trek. Additionally, van Vogt won an out-of-court settlement from 20th Century Fox over the film Alien, a movie which shares some similarities with his book.

While the novel lacks the critical weight of other fix-up books, it’s a good, representative example of the transition that the publishing industry faced at the time, and how its authors adapted. It’s a lesson that’s well-worth looking closely at, as the entire publishing industry faces new technological challenges and disruptions from the likes of self-publishing and micro-press platforms.