An Empress for All Seasons 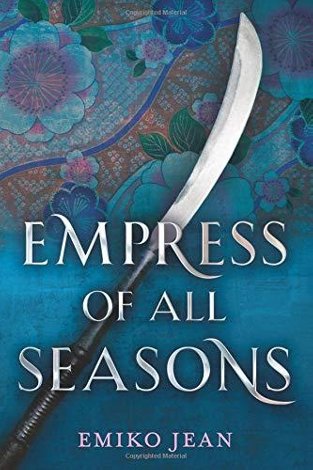 Empress of All Seasons by Emiko Jean

“Our bodies are not ornaments, they are instruments.”

In the world of Honoku, there are humans and there are yokai. Crafted with magical abilities and bearing fanciful, wild physical features such as scaled or transparent flesh, the yokai are powerful and feared by humankind. And so, to combat their fear, humans have outlawed the yokai and enslaved them with magics of their own, thanks to the power of the divine Emperor, who has been blessed by the gods themselves and fashioned in their image.

Mari is a yokai—not just any yokai, but an animal wife, born to a village of women atop a mountain on the outskirts of the Empire. As an animal wife, Mari has been raised with a singular goal for her entire life: to marry a man, and steal his fortune for the good and profit of her people. While most animal wives run this particular scam multiple times—also getting with child until they give birth to a daughter and their service is complete—Mari’s task is very different. Because she’s plain and her beast side is only half-formed, Mari has been trained to fight. Her mission isn’t to con local farmers out of their money, but to win the tournament of all seasons, marry the prince, and make off with the royal treasury.

For you see, in Honoku, the Empress is determined in a very different kind of way. Every generation, women from all corners of the country flock to the capital for the prince’s hand. Every woman from any tribe or walk of life may enter—so long as they are human and not yokai. In order to win the crown, they must survive the palace’s four season rooms (and each other). Mari has trained and fought for years, becoming a master with the naginata, as fierce and deadly as any master samurai—plus, with her yokai beast form, she has an additional edge on the competition.

When Mari arrives at the capital, and as she begins the tournament, she learns that there is so much more at stake than just an Emperor’s riches. She sees firsthand how the rest of her kind are collared and enslaved, and how the humans treat yokai. Then, she meets Taro—the crown prince, who is more fascinated with inventions and whose heart seems far more compassionate than his father’s—and dreams of another future. One where she might win and hold on to the mantle of Empress, and, with Taro, fight for a new future that has humans and yokai living together in peace… but to reveal her true self to Taro, is a risk Mari is terrified to take.

Meanwhile, a yokai rebellion is brewing. Mari’s only real friend, half-yokai “Son of Nightmares” Akira, follows his beloved to the capital and vows to keep her safe, and in so doing becomes embroiled in a plot to overthrow the Emperor by assassination.

Mari, Akira, and Taro are three players who will determine the future of Honoku—yokai and human alike.

Emiko Jean’s Empress of All Seasons has a brilliant premise: instead of strapping young men vying for the hand of the fair princess, Jean’s Honoku has the inverse tradition, in which women fight for power and glory. I am a sucker for a good gladiator/deathmatch competition story, and for the most part, Empress of All Seasons delivers on this promise: four seasons, four rooms, four different challenges for Mari and her cohorts. I love the thread of mythology running throughout the book, in which the future Empress must conquer the four different seasons in order to be considered worthy—there are different riddles and obstacles in each season’s room, challenging Mari not only physically, but mentally and emotionally. My only complaint for all of this deliciousness is that the room scenes are brief and incredibly straightforward. As Mari and the other women enter each room they are given a riddle to solve in order to find the scrolls that mean they can move on to the next challenge—unfortunately, each riddle is shockingly basic (e.g. good ol’ “what has a head but never sleeps” is one of them), and the actual hunt for the scrolls tends to happen very quickly. If you’re in a Battle Royale situation, you want to see all of the battle.

Things happening too quickly is a theme that holds true throughout the novel. I loved the ideas and characters: Mari as a heroine is smart and fierce, with her own self-doubts but always thinking of the rest of the yokai and trying to see the bigger picture. The prickly relationship between Mari and her tough-love mother is layered and nuanced, as is Mari’s relationship with Akira, Son of Nightmares. Akira’s own arc—desperate to protect his friend (of course, he’s in love with her too)—is powerful, as he makes the leap from always running and hiding in the shadows, to rebel and assassin. Even Taro’s ark is brilliant as the would-be engineer Emperor who struggles with his father’s displeasure, thinks himself in love with Mari (but it’s a love that is instant and fierce and false, as Akira points out), and then quickly turns violent and vengeful. There’s also the foundational struggle between the yokai and humans, interspersed with god origin myths as interstitials throughout the book—this is all fantastic, engaging material and fodder for an epic work of fantasy...

The only problem is that it all happens far too fast. The micro-struggles Mari has as a yokai with her mother, tribe, and friends is beautifully developed—but it comes at the cost of not fully realizing the larger macro-story, with the building war between the yokai and humans. The romantic angle between Mari and Taro is similarly hasty and feels forced instead of star-crossed, and while that would be completely fine given that the purpose of the entire romance is the war, we actually don’t see any of the war. There’s a lot of buildup to the battle… which is won and resolved for generations to come in a few short pages. And while I love a standalone YA fantasy novel, Empress of All Seasons truly needed more time, attention, and complexity in order for it to work. Emiko Jean has created an engaging Japanese-rooted fantasy world, but because every storytelling step is rushed through (not to mention the frustrating distraction of every Japanese word being italicized) it falls just short of the mark.

In Book Smugglerish, six animal wife talons out of ten.