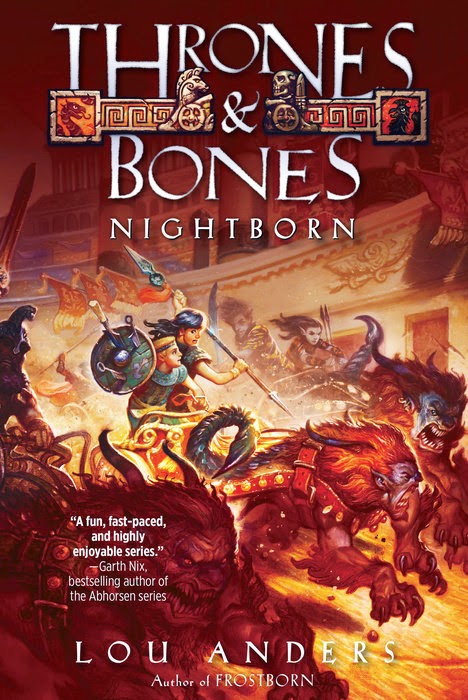 This month's roundup of speculative fiction reads includes time travelers on the run, an off-world murder mystery, a thriller that puts science up against theology, flintlock fantasy, steampunk adventure, and alternate worlds.

WHAT IT'S ABOUT: Everyone is chasing after a powerful artifact known as the Horn of Osius, an ancient relic capable of controlling dragons. Who is everyone? The Dark Elves; Desstra, a conflicted Dark Elf training to join their elite ranks; and Karn Korlundsson, an avid gamer and adventurer who learns that his best friend, Thianna Frostborn, disappeared when trying to find that very same relic.

WHY YOU MIGHT LIKE IT: Nightborn offers a carefully constructed and believable world populated with handfuls of imaginative and well-realized fantasy creatures. Plus, like Frostborn, the previous book in the Thrones and Bones series, Nightborn comes with a nifty extra: instructions for playing the board game Charioteers, highlighted in the novel.

WHAT IT'S ABOUT: Convicted criminal James Griffin-Mars is a time-traveling chronman, tasked with undertaking missions into Earth's past to recover resources and treasure to benefit his present. His world could use it. Earth has been rendered toxic and most of humanity has fled to the stars for their survival. Pillaging the past comes with one rule: never, ever alter the timeline. Break that rule, and you are sentenced to immediate death. So when James rescues a scientist from Earth's past, it means that both of them are on the run to save their lives.

WHY YOU MIGHT LIKE IT: Time Salvager is a high-speed, high-stakes adventure that brings so much promise that—breaking news—it's been optioned for a film franchise ahead of its release.

WHAT IT'S ABOUT: A teenage videogame player discovers that his favorite game is really a simulation to train people of Earth for an upcoming alien invasion.

WHY YOU MIGHT LIKE IT: Armada is brimming with retro pop culture and videogame references, including a premise that's unapologetically ripped from the 1980s sci-fi flick The Last Starfighter.

WHY YOU MIGHT LIKE IT: This is the granddaddy of "Years Best" anthologies, 32 years running! And editor Gardner Dozois makes sure to pick stories that showcase the wide spectrum of writing available in the genre today.

WHAT IT'S ABOUT: A team of experts is sent to the faraway world of Iris, a newly discovered crystalline planet covered in dark matter, thought to be uninhabited. Sara Callicot is recruited to keep watch over an unstable crewmate named Thora. When the crew arrives, not only is the planet inhabited, but a crew member is murdered and Thora mysteriously disappears.

WHAT IT'S ABOUT: FitzChivalry Farseer, former king’s assassin and royal bastard, thought to be dead, poses as country squire Tom Badgerlock and leads a happy life. His biggest worry is whatever became of his friend and ally, the Fool. That is, until a mysterious stranger arrives bearing a message.

WHY YOU MIGHT LIKE IT: It's your chance to get in on the ground floor of an exciting new fantasy trilogy (the Fitz and the Fool Trilogy, a new branch of the Farseer saga) from one of fantasy's masters.

The Flicker Men by Ted Ko

WHAT IT'S ABOUT: A quantum physicist named Eric Argus shocks the world with an experiment that proves the existence of the human soul, igniting a struggle between science and theology...and puts Eric on the radar of a shadowy organization.

WHAT IT'S ABOUT: Fraternal twins named Nels and Suvi transcend beyond their royal heritage to defend the kingdom. For his part, Prince Nels is considered flawed by the ancient Kainen royal family of Eledore. When his scouting party is ambushed, Nels does something forbidden for a member of the ruling family: he picks up a sword and fights. Thus he is disowned by his family and assigned to the military. But Nels proves to be a valiant leader just as Eledore comes under attack from the outside. Now, with the aid of his sister Suvi, who has allied with pirates, he mounts a military offensive armed with sword, canon, and what little magic is left in the world.

WHY YOU MIGHT LIKE IT: This epic flintlock fantasy is a refreshing change of pace from traditional fantasy.

WHAT IT'S ABOUT: Anti-hero Jess Galvan, whose body is inhabited by the soul of El Cucuy, a 500-year-old demon who wants to bring about hell on earth, becomes the target of Cucuy's right-hand man amidst a drug cartel war. The good news is that Galvan's possession gives him superhuman strength and endurance, and he's not exactly taking names while he's kicking people around.

WHY YOU MIGHT LIKE IT: Mansbach's novel deftly combines horror, the supernatural, gritty suspense, Tex-Mex flavor into a story that's just plain fun.

WHAT IT'S ABOUT: At the turn of the 20th century, New Pittsburgh is ruled by a shadowy government known as The Oligarchy. Even worse, the dark underground of the city is home to supernatural creatures. Bad news for the supernatural creatures: world travelers and adventurers Jake Desmet and Rick Brand, as well as Jake's cousin Veronique 'Nicki' LeClercq are not about to let the city go down without a fight. And they have lost of steam-powered devices to help them.

The Fall by R. J. Pineiro

WHAT IT'S ABOUT: Adrenaline junkie and daredevil Jack Taylor tests a new military strategy, the "orbital jump." But when Jack jumps from the upper-most reaches of the atmosphere and vanishes, he ends up on an alternate Earth where he died five years earlier.

WHY YOU MIGHT LIKE IT: This alternate world sci-fi thriller is packed with high stakes and moves at a high speed.

WHAT IT'S ABOUT: Mankind's first voyage beyond the solar system on a generation starship with the goal of colonizing another planet.

WHY YOU MIGHT LIKE IT: Robinson is known for his intricate research on a variety of topics, which spills over into his fiction making it both realistic and educational.

The Price of Valor by Django Wexler

WHAT IT'S ABOUT: The city of Vordan is in trouble. The king is dead and war has come, the new queen is threatened by assassins and is effectively powerless against the government, and the city's leader is a zealot who sees traitors everywhere. But the queen did not save the city from one tyranny just to watch it succumb to another, and a steadfast band of heroes prepare for a battle to help save it.

WHY YOU MIGHT LIKE IT: The latest outing of the Shadow Campaigns series is another well-told tale of engaging fantasy.

But wait! There's more! Besides the massive Dozois anthology mentioned above, here are some more short fiction treats for the hungry reader:

o  The Blumhouse Book of Nightmares: The Haunted City edited by Jason Blum

o  The Mammoth Book of Dieselpunkedited by Sean Wallace

o  Three Moments of an Explosion: Stories by China Miéville

John DeNardo is the editor of SF Signal, the Hugo Award-winning group science-fiction and fantasy blog featuring news, reviews and interviews. You can follow him on Twitter at @sfsignal.