Everything You Always Wanted to Know About Horror Fiction 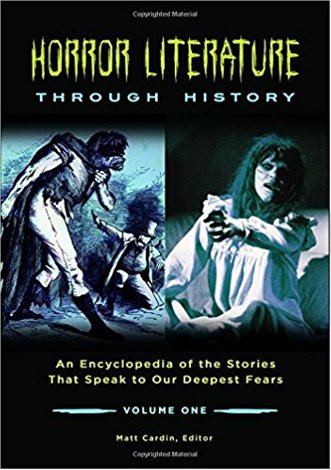 October is my annual reminder that my literary diet could always use more horror fiction.  Although I consider myself a fan, horror makes up a relatively small portion of my reading. I've recently started to question why that is. Is it because horror books are scary and unsettling? That can't be it; that's the very reason I read horror in the first place.  As inward-directed questions often do, the search for an answer led to bigger questions about the nature of horror fiction.

That's when I stumbled upon Matt Cardin's new, fascinating two-volume reference Horror Literature Through History. As someone wanting to learn more about the horror genre, this essential and comprehensive encyclopedia is a godsend. As a reader looking to up my horror fiction intake, I found it to be one of the best wellsprings from which to find countless horror reads that will keep me up at night.

Cardin's preface sets the foundation for the set's 960+ pages. He notes the timeliness of the topic given horror's current resurgence after a relative point of "cultural downsizing" experienced in the 1990s that followed the big horror boom in the 1980s. Horror has indeed become more popular and profitable as evidenced not only by the literary resurgence, but by similar trends in other media as well, like films, television and games. But it's literary horror that predominantly feeds the cultural desire for it.

What is Horror and Why Read it?

To discuss horror, it makes sense to define what it is first, which Cardin does in his introduction. It is not, as some people may casually do, a synonym for fear, although fear does play its part. There is also an inherent revulsion of the horror being witnessed by the reader, a "wrongness or repulsiveness" as the he puts it. Therein lies the reason horror resonates with readers: it's an emotional gut reaction to the actions, events, people and monsters that are involved in the horror. And, to make it more portable to other forms of media, it's not so much a genre as it is a mode of fiction.

Cardin goes on further to grasp why readers consume horror. It's a valid question. Why would anyone in their right minds seek out things that are horrific and unsettling, emotions that are by their very definition not our emotional norm? The answers strike true with anyone who has enjoyed a good horror story.  First, there's the roller coaster effect: experiencing the excitement of horror fiction from the safety and comfort of your reading chair. Then there is the cathartic effect of purging your inner fears through fiction to help you better deal with them in real life. And finally, through the dialog between writer and reader, the comfort of knowing someone else shares your abhorrence for the weird and horrifically strange.

The first part of Horror Literature Through History offers readers a timeline of horror fiction through the ages beginning with The Epic of Gilgamesh from 2100 BCE. (Perhaps not coincidentally, this is the same story that birthed Superheroes.) The sections in this part discuss the emergence of horror fiction in ancient times and the changing trends through the Middle Ages, the early modern era, the eighteenth century, and so on.  Each information-packed section discusses the highlights of horror fiction for that period: the principle payers, the major works and the predominant forms that horror fiction took. By providing a timeline of horror literature through the ages and discussing the literary trends during those periods, readers can witness the evolution of horror from its very roots. It's intriguing not only for historical reasons, but also because it steers readers towards works they might not otherwise have known about. Spoiler alert: this timeline ends with you putting more books on your reading pile.

The second part consists of a generous handful of subjects as they relate to horror fiction. For example, there's a discussion of horror subgenres like Apocalyptic Horror, a flavor of horror that deals with the end of humanity. There are sections on other sub-genres as well, like ghost stories, Shakespearean horrors and vampire fiction. You'll find essays on topics like horror anthologies, horror criticism and horror comics. Rounding out the part are essays on themes like social commentary in horror literature and the legacy of Mary Shelley's Frankenstein.

These essays are interesting in their subject matter and pleasantly informative. The book's contributors include seventy scholars and authors from around the world, giving the reader of Horror Literature Through History a new perspective on different aspects of horror that are as diverse as they are topical. Any reader would be hard-pressed not to add titles to their list of books they want to read. As an added bonus, the reference set contains lots of extras, like the 150 sidebars about the various topics discussed throughout both volumes.

The third part of the Horror Literature Through History, which makes up the bulk of its pages, consists of alphabetized entries on numerous authors, works and specialized topics to give readers a "deep dive" into different aspects of horror literature. Here is where you'll find out more about mummies and zombies. Here is where you'll find out all about the so-called Gothic Hero and about classic short fiction stories like Edgar Allan Poe's "The Fall of the House of Usher".  Here is where you'll find out why tireless editors like Ellen Datlow are so influential.  (There is also an insightful interview with her and several other contemporary players in the field of modern horror throughout the encyclopedia.)

In other words: Horror Literature Through History is an essential reference for horror fans that's both entertaining and educational and, if you are horror-deficient like me, is sure to increase the amount of horror in your literary diet.