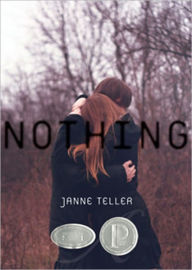 For the past month, I’ve been completely binging on Norwegian crime novels. And so, of course, it occurred to me to look into what’s been translated for the YA audience. While I didn’t find a whole lot in the way of crime fiction—or novels specifically from Norway—I have managed to cobble together a list of books imported from the larger Scandinavian region. Let’s take a look!

Nothing, by Janne Teller

A middle schooler has an existential crisis, climbs a tree, and refuses to come down. In an effort to show him that life is worth living, his classmates begin sacrificing things that are meaningful to them—and while their choices start small, it all eventually takes a dark(er) turn. This one has been compared again and again to Lord of the Flies and has been pretty universally praised by critics—and is also a Printz honoree—but so far, I haven’t found the right time to read it. Everything I’ve read about it talks about how unrelentingly bleak it is, and I just keep wondering HOW BLEAK, EXACTLY?

A fantasy quartet about a girl with the power to see shame—if you look into her eyes, she’ll see all of your guilty secrets. Dragons and politics and witchcraft and an evil warlord and family strife—how did I

miss this ENTIRE SERIES when it was released back in the mid-2000s?

172 Hours on the Moon, by Johan Harstad

NASA returns to the moon in 2019, and to bring attention to the trip, they send three teen lottery winners along for the ride: a girl from Norway, a girl from Japan, and a boy from France. When they get to the moon, everything goes horribly wrong—the Kirkus review mentions the characters being forced to fight “evil forces”—AND THIS SOUNDS SO RIGHT UP MY ALLEY I ALMOST CAN’T STAND IT.

Markus and Diana, and Markus and the Girls, by Klaus Hagerup

Comedic contemporary realistics about an awkward middle school boy who gets into girl trouble—in the first book, he becomes penpals with a beautiful young actress by asking for an autograph WHILE POSING AS A 36-YEAR-OLD MILLIONAIRE (sounds a bit like Anastasia at this Address, no?), in the second, he puts on a production of Romeo and Juliet to woo his newest beloved. These sound both ridiculous and adorable and I can’t wait to get my hands on them.

A Faraway Island, The Lily Pond, and Deep Sea, by Annika Thor

Set during WWII, about Stephie Steiner, a Jewish refugee in Sweden. LOVE THESE BOOKS—they’re so quiet and so restrained, but are written with such nuance and such depth of emotion. They deal with great change and with great loss, with culture clash and religious differences, with what it’s like to live as a refugee in a small community, with sisters and newly formed families and the slow build of love and trust. They’ve been compared to the Anne of Green Gables books, and rightly so. Again: LOVE.

Me on the Floor, Bleeding, by Jenny Jägerfeld

Contemporary realism which opens with 17-year-old Maja accidentally cutting the top of her thumb off in shop class. Also: Maja finds new romance with a boy named Justin Case, and her mother has recently been diagnosed with Asperger syndrome, which may explain a lot about their difficult relationship. This one sounds like it might make for a decent Perks of Being a Wallflower readalike…we shall see!

The Circle, The Fire, and The Key, by Sara B. Elfgren

Witches, Chosen Ones, an abandoned amusement park, saving the world—according to Kirkus, this series is really more about the interpersonal relationships than the fantasy elements. Which, depending on how strong the characterization is, could make for an engrossing read. But considering the tepid reviews and the fact that the trilogy clocks in at over TWO THOUSAND PAGES, it might require more of a serious commitment than I’m prepared to make.

Heart's Delight, by Per Nilsson

The framing device in this one sounds a LOT like Why We Broke Up—in this case, a boy works his way through a pile of items related to his ex, telling the story of their relationship as he destroys each item. Apparently, there is a lot of crying. (On his part, not necessarily on the part of the reader.) It sounds spare and lovely and I’m looking forward to tracking a copy down.

I do always love looking into the backlist—there’s always such cool stuff to be found! Is there anything superawesome that I’m missing? If so, tell me! I want MORE MORE MORE.