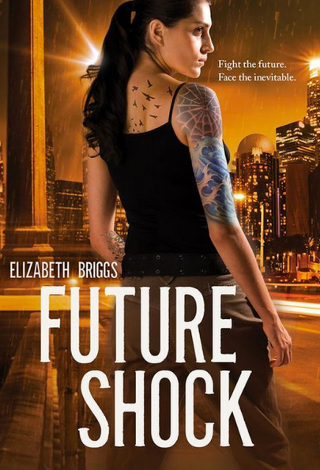 Five teens are sent into the future by the shady Aether Corporation with the mission to bring back data—tech, med and pharma—that can be used to shape the present world. Elena Martinez is one of them: a foster care Mexican American with street smarts, few prospects, and an eidetic memory. It is the latter ability that has attracted Aether: time travellers aren’t allowed to bring back any physical object so a person with total recall is the perfect asset. Elena’s fellow travellers, Adam, Chris, Trent and Zoe—have similar abilities and, apart from white boy Adam, similar backgrounds. The mission is simple: travel 10 years into the future, spend 24 hours there (which means only 12 minutes in present time once they are back) and come back to enough money to set them all for life. Easy. The one thing they need to avoid at all costs is to search any information about their future selves in order to avoid the life-altering, mind-destroying Future Shock.

But things go terribly wrong when, instead of 10 years, they are sent 30 years into the future. There is no one from Aether waiting for them on the other side as promised. They are wearing the wrong clothes, they are disconnected from the technology of that time and it soon becomes clear that they are definitely not prepared for this future. So when everything goes wrong they break the one cardinal rule and look up their future selves. They have been lied to: there is no such thing as Future Shock, at least not the way they have been told. But there is the shock of finding out that out of all five travellers, only Adam is alive. The rest of them were (will be) murdered exactly 30 years ago (tomorrow), the day after they went back from the future.

Now Elena and the other travellers have 24 hours to find out what exactly happened to them and find a way to change their fate.

Future Shock is a fast-paced, plot-driven futuristic sci-fi thriller full of wibblily wobbly timey wimey stuff. The specifics of time travelling are hand-waved spectacularly and I found that it really didn’t matter that the physics of the time travelling mechanism was underplayed because the book was so fun.

Elena is a great protagonist, with an engaging narrative voice, a gut-wrenching back story, and an interesting, overall character development.

One of the main motifs of the book is of course the idea of fate and this is deployed in two ways: the storyline surrounding the time travelling element and what happens in the past/future (and can those be changed?) as well as the idea that there is nothing you can do to change your nature. As such, Elena is anxious that she is destined to be violent like her father. The kids also worry that they have been chosen not for their abilities and skills but because they are expendable—kids from impoverished, unprivileged backgrounds as they are.

With that said, there are certain aspects of the novel that fall short. Due to time constraints and the fact that the story takes place within 24 hours, it’s hard to be invested in the romance that develops between Elena and Adam. And a whole lot of the novel is dedicated to their budding relationship. Beyond Elena and Adam, not all characters are created equal and some of the other travellers almost fade in the background without enough development beyond the bare minimum.

There is definitely a conversation about privilege to be had here. I am not so sure that the story fully examines this and takes advantage of the potential, though. The premise—plucking kids from foster homes or from other backgrounds—is a good start. Three of the kids are people of color and the one kid who is better off and is given more opportunities is one of the white kids. I especially worry about stereotyping: Elena’s Mexican family history is full of violence and death. Chris, the Black male character, is constantly referred to as “big” and “angry” especially in the beginning, which puts to mind the harmful Scary Black Man trope. In addition, the only queer character in the novel gets killed. In fairness, there are up sides: this is a time travel novel and said character can be brought back to life in future instalments (this is the first in a series, I believe); Chris proves to be a character who wants to protect his family and unborn child. And it is very refreshing to have the girl protagonist as the one scared of being violent since that subverts gender stereotypes well (with Adam being the one needing constant saving and protecting).

Overall, this is a mixed bag: fun and engaging but with a few considerable snags.