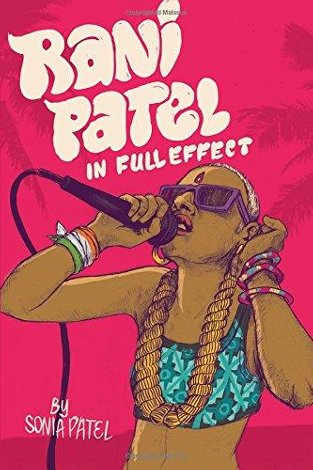 This was my evolution
into rap elocution nonviolently battling persecution
putting misogynists in verbal correctional institutions
call my solution a female revolution
retribution in the form of rhyme electrocution
my underground contribution…
—Rani Patel in Full Effect, by Sonia Patel

One day, out of the blue, twelve-year-old Rani Patel’s father came home and said to Rani and her mother, “I’m moving to Moloka’i. Come if you want.” He left the next day. Rani and her mother, by themselves, sold their Connecticut home, packed up their belongings, said goodbye to their friends and family and tightknit Gujarati community, and followed him to Hawaii.

Now, four years later, Rani has had suspicions about her father’s infidelity for quite some time. He’s been strangely distant, he comes home late—or not at all—and a little while back, she saw him buying roses, and she can’t remember him ever buying flowers for her mother. As the book opens, Rani’s suspicions have been proved entirely, undeniably correct—and that information changes everything she has ever understood about her family, her parents, and her own place in the universe.

Through words and song—Rani loves rap and hip-hop, and she aspires to perform, to hold an audience rapt with her truths—she begins to unpack her reaction to the implosion of her parents’ marriage, and more specifically, her relationship with her father. His recent distance has allowed her to finally begin to process the sexual abuse that she has endured over the last ten years—but her identity and her self-worth has been so wrapped up in who she is in relation to an older man for so long that she isn’t sure how to see herself as an individual.

That is a LOT of background, especially for a book that’s only a little over 200 pages long! But there’s so much going on in this book that it’s necessary.

It’s about gender and power dynamics and sexism, about how sexism is not only supported within culture, but built into its framework. It’s about the emotional and psychological effects of incest: about how a victim of incest can be scared of her abuser, ashamed of the abuse, angry about the abuse; but also crave the attention of the abuser, feel special about being singled out, feel jealous when his attention turns elsewhere. Patel writes about the complexity of Rani’s feelings about her father with such nuance and empathy—she knows what he’s done to her is wrong, but now that he’s gone, she still misses him.

It’s about cultural isolation, in terms of being The Only One:

Because first of all, everyone on Moloka’i knows I’m not Hawaiian. I’m the only Gujarati girl on the island. Second, guys never notice me. Pretty lady? Gorgeous hair? What was he talking about? Moloka’i boys won’t even look at me. To the fine local studs my age, I’m a sixteen-year-old dorky four-eyed flat-chested curry-eating non-Hawaiian nobody.

And it’s about the isolation that often comes hand-in-hand with sexual abuse, in that the abuser discourages—and sometimes outright sabotages—his victim’s friendships and relationships with other people:

Only thing missing—a girlfriend partner in crime. I wish and sigh. Driving alone, I’m left with my thoughts. Then again that’s nothing new. Rani, my princess, I need you. Why do you need friends?

Her inability to connect with women is striking and heartbreaking—except for her mother, almost every woman she interacts with is seen as a rival—and the Author’s Note, in which Patel talks about that disconnect as one of the most common psychological effects of incest, makes it even more so. It’s a book that is honest and realistic about how hard it is to come to terms with abuse: how willing and even eager we are to accept excuses and rationalizations, to forgive and give abusers ‘another chance’; of how much harder it is to see from the inside than the outside. Readers who get frustrated with Rani’s desire for her father’s company—and with her choices in regards to Mark, the much-older and clearly-troubled man that she gets involved with—would do well to read Patel’s Note.

The setting—1991 Moloka’i—is an integral part of the story: in terms of all of the thinking Rani does while driving back-and-forth across the island multiple times a day; in terms of the solace and calm she gets from the landscape. It hits on the long term effects of colonialism on culture and religion and economy; it deals with addiction in terms of how it affects people, families, and the larger culture; it deals with politics and protest and community action.

I’ve saved Rani’s voice for last, because in a book that deals with a whole lot of hard stuff, her voice is a joy. Not only is she entirely open about her appreciation for beauty and totally willing to own her sexual appetite—it’s rare that I find a heroine in YA who refers to herself as ‘horny’—but the way in which she expresses said sexual thoughts is often cheerfully, hilariously lusty:

He’s wearing low-riding boardshorts. Nothing else. I’m envisioning washing some clothes on his abs when he passes me the headphones.

And while the excerpt at the beginning is from one of the songs that she worked out, over time, in her notebook, she’s also prone to mentally freestyling to herself:

Clutching my notebook close to my chest
as if it’s a question-proof vest
boy, you got me stressed
and mentally undressed
with your direct requests
I’m about to put myself under house arrest
lest you guess I’m
messed up and depressed.

Her narration and dialogue is a mix of English, Gujarati, Hawaiian, Hawaiian pidgin, and slang, and—joy of joys—Patel and publisher Cincos Puntos didn’t italicize the non-English words. As I’ve said before, I’m really happy to see publishers and authors moving in that direction—it’s true to the voice and perspective of the character, rather than an attempt to cater to an assumed monolingual audience. I have no knowledge of Gujarati, Hawaiian, or Hawaiian pidgin, but there were plenty of contextual clues that allowed me to pick up the general meaning—and in cases where I missed some nuance, well, that’s on me for my own ignorance, and gives me all the more reason to keep learning.

Pair with: Girl in Pieces, by Kathleen Glasgow, another extremely strong 2016 debut about a girl trying to find her way and her voice, who, like Rani, enters into an ultimately hurtful relationship with a much older man.