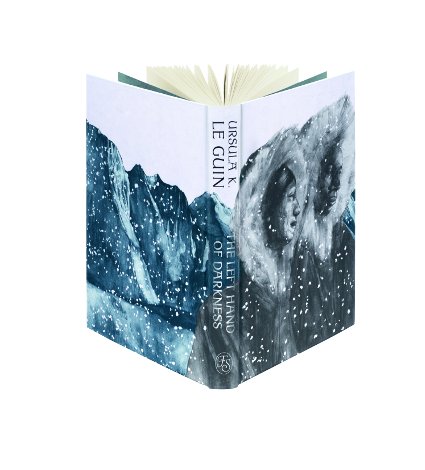 It's hard to be a book lover and not fawn all over the beautiful books being produced by The Folio Society. They are, simply put, works of art. They're immediately eye-catching and, because of their consistently high-quality production standard, are a pleasure to hold and read. I had the chance to get my book-loving hands on two of their new titles—one a science fiction classic and the other a new horror anthology—which were just released as part of their fall lineup and they are both stunning, must-have editions.

THE LEFT HAND OF DARKNESS by Ursula K. Le Guin

The Folio Society continues their tradition of producing what have to be considered definitive editions of literary classics with the publication of Ursula K. Le Guin's classic science fiction novel from 1969, The Left Hand of Darkness. What makes this story an enduring classic is that Le Guin's brand of science fiction avoids the usual tropes of the genre. Her books explore the relatable and accessible realm of social science fiction. That is, her books are about people; how they behave, how they interact and how they are affected by change. These explorations inevitably lead to the creation of interesting cultures.

The Left Hand of Darkness is but one part—inarguably the most famous part—of her Hainish Cycle of novels and stories, a set of interconnected stories based on the premise that habitable worlds (including Earth) were populated by human colonists originating from the planet Hain. This ever-growing intergalactic civilization is referred to as the Ekumen. The novels of the Hainish Cycle are usually concerned with representatives of the Ekumen reaching out to establish contact with other human worlds, who have long since forgotten their origins, and inviting them to join the larger human community of planets. This fascinating setup allows Le Guin to explore the anthropological and sociological ramifications of first contact with cultures different from our own.

The Left Hand of Darkness is set on the wintery world of Gethen. Lone Earth-born envoy Genly Ai is tasked with facilitating Gethen's inclusion into the Ekumen. His mission is not without its obstacles, the foremost being that Gethen's inhabitants are uniquely androgynous. More specifically, they are ambisexuals, having the ability to change their gender at the peak of their sexual cycle. The cultural differences this creates somewhat blocks the avenues of communication for the envoy. Assigned to assist him is Estraven, a Gethenian politician who is shortly exiled from the Gethenian kingdom of Karhide for unrelated matters. Before he can complete his mission, Ai must contend with a rival nation, members of one of Gethen's primary religions, and a dangerous trek across Gethen's icy surface. Throughout this journey, readers get an illuminating depiction of gender issues that are reflected of the story.

The new Folio Society edition of The Left Hand of Darkness features excellent black-and-white illustrations by David Lupton that capture Gethen's wintery environment. (Lupton also illustrated the Folio Society edition of Le Guin's A Wizard of Earthsea.) The book is housed in a slipcase dotted with the snow that gives the planet Gethen its "Winter" nickname. There's also a wonderful introduction by Becky Chambers, who talks about the novel's continued relevance through the decades. A postscript to that introduction conveys the bittersweet reaction to the fact that Le Guin has recently left us—bittersweet because, although the literary communities mourn her loss, she left behind a phenomenal and inspiring legacy of work that we can continue to enjoy forever.

THE FOLIO BOOK OF HORROR STORIES edited by Ramsey Campbell

"Horror Fiction is the branch of literature most often concerned with going too far," says Ramsay Campbell in the introduction to The Folio Book of Horror Stories. That's certainly true of the fifteen stories he's selected to be included in this spine-tingling volume, a mix of classic and contemporary horror fiction spanning one hundred seventy-six years:

By providing a chronological range of stories that span almost two centuries, the anthology serves as a makeshift timeline and evolution of horror fiction. There are many different kinds of horror stories, of course, and this assortment serves well to depict the range of even a single genre of literature. There are gothic horror

The design of this wonderful anthology matches the unsettling stories contained within it. The blood-red cloth of the book's cover is just perfect. Even more striking is the wonderfully shocking image of a human face whose underlying skeleton is exposed by a bloody hand print—just one of the absolutely marvelous illustrations provided for this edition by artist Corey Brickley. The book itself comes in a solid red slipcase and is available now, just in time for your Halloween reading.

I'll have more to say about these stories in the coming weeks as I dive into its many dark corners. Stay tuned!