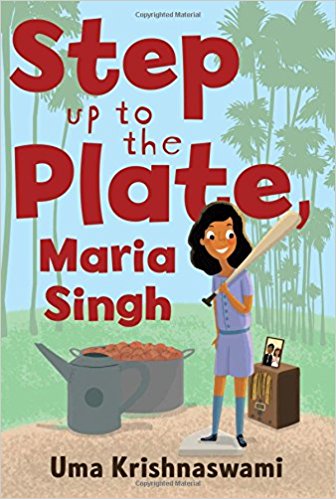 While I’m not particularly up on real-life sports, well, EVER—I vaguely track various seasons by what uniforms my younger patrons are wearing, and that’s about it—reading fiction that’s centered around sports is a whole different ballgame.

*pauses for groans to subside*

So. Here are a few new and upcoming middle grade sports novels—one that I’ve read, and three more that are on deck:

Step Up to the Plate, Maria Singh, by Uma Krishnaswami

Reading The Grand Plan to Fix Everything made me a Krishnaswami fan for life, so I was delighted when this book appeared in my mailbox. It’s set in 1945 Yuba City, California, and focuses in on nine-year-old Maria Singh, aspiring softball player and big sister. She and her closest friends at school are part of the adha-adha—“half-and-half”—community, with fathers originally from India and mothers originally from Mexico.

It’s a story about softball, about teamwork and confidence and responsibility and practice. It’s a story about family, warm and loving and supportive, even through hard times and disagreements. It’s a story about friendship, about overstepping and apologizing, about understanding and forgiving. It’s about belonging, about feeling connected to and invested in more than one place and issue at a time, and it’s about different immigrant experiences. It’s a story about racism and sexism, about the interplay between them, and it’s honest about how, throughout history, our country’s laws have not just been influenced by them, but have supported them.

It’s also full of food, which I always love—I don’t think it’s humanly possible to read this book and not be hungry by the end—and it’s funny and sweet and thoughtful and smart, with rich characterization and a respect for the complexity of the dynamics of different forms of prejudice. I loved it so much that after finishing it, I immediately requested three of Krishnaswami’s older books from the library.

Graffiti and stolen diamonds and PARKOUR; friendship and family secrets and local history. A runaway and at least one suspicious death; a dangerous gang and a necklace that is also a CLUE.

Note: this book is beautifully designed—be sure to peek under the dust jacket!—and something about the combination of the paper choices and the fonts of the chapter headings and the occasional inclusion of diagrams and drawings and handwritten notes and so on makes it a pleasure to even just pick the book up and flip through the pages.

Baseball and bees, family and ambition and hard choices. I’m especially interested in this one because of the time shifts—it follows Rafael during his childhood in the Dominican Republic, working to improve his game in order to get noticed by baseball scouts, and it ALSO follows twelve-year-old Maya as she follows Rafael’s first year in the minor leagues. Kirkus especially loved it for the focus on the emotional lives of the main characters. Starred review.

Let me know if you’ve seen other recent sporty middle grade—in the meantime, I’ll be over here, reading Finding Mighty.