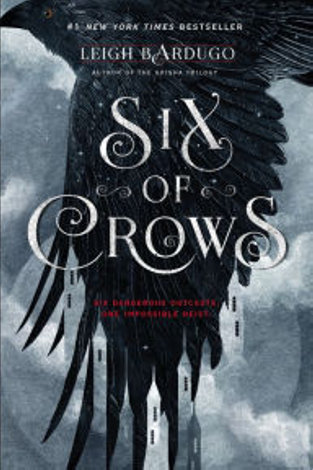 Assembling the Team; executing the Heist. These are two of my absolute favorite tropes in all of film/television and genre fiction. Often they go hand in hand, wherein one character has motivation to pull off a grand caper, and needs to find the best possible team to do so. Why do I bring these tropes up, you ask?

Several reasons. 1. I just finished reading Six of Crows  by Leigh Bardugo, and, much to my delight, it was a perfect embodiment of a grand heist novel set against a fantastical realm backdrop, involving magic, thievery, and double-crosses with the highest of stakes. (That ending!) 2. Captain America: Civil War is officially available digitally, and I’ve been riding that wave. (While Civil War isn’t really a heist story, the parts with the Avengers fighting against eachother on opposite sides of an ideological divide—and the fact they recruit new faces, like Spiderman and Ant-Man, is awesome.) 3. The remake of The Magnificent Seven is coming out in two weeks—one of my favorite westerns, with one of the absolute best assembling-the-team montages ever. (Please don’t be a horrible remake, film gods.) 4. The aforementioned Six of Crows has its sequel, Crooked Kingdom, coming out at the end of this month and I cannot wait.

You could say I have heists (and teams) on the mind. In that light, here are a few of my favorite heist stories in SFF fiction.

Six of Crows by Leigh Bardugo. The book that inspired the list! Six of Crows is the story of a hardened young street gang leader, Kaz Brekker, who is recruited to assemble a team, break into the impenetrable Ice Court, and kidnap a man who holds the key to creating superpowered Grisha (people who already have incredible magical gifts, but mega-amplified by a drug). Kaz’s team includes a convict-gladiator, a sharpshooter, a rich kid runaway, a Grisha, and the sneakiest of spies; together, they plan to pull off one of the most daring heists their world has ever seen. It’s a fabulous, thrilling ride and I recommend it whole-heartedly.

Mistborn by Brandon Sanderson. The first book in the Mistborn trilogy, The Final Empire, is in fact a heist novel on the grandest possible scale: a great thief named Kelsier has a grand vision to overthrow the despotic god-ruler of his homeland, liberate his people, and so assembles the best crew of thieves and allomancers to pull it off. The worldbuilding in Mistborn is superb and remains to this day one of my favorite magical systems ever—here, magic workers (allomancers) ingest and “burn” metals, which allows them to “pull” and “push” forces. Think Magneto, but way more involved and descriptive. Plus, Vin is a heroine of my heart and I love her so.

The Quantum Thief by Hannu Rajaniemi. A challenging science fiction novel about a thief who has lived several lives, and who is broken out of a psychological torture prison in order to pull off one last caper, The Quantum Thief is… complicated. Heavy on the physics jargon and principles, flipping between first and third person narratives, there are two main storylines in The Quantum Thief that come to a crashing climax and lead to more questions and mysteries. You want to work your brain out while reading a grand heist story? This one’s for you.

The Lies of Locke Lamora by Scott Lynch. This is kind of a gimme—of course Locke Lamora would be on the list! An orphan whose entire life has revolved around cons and heists, the eponymous Locke Lamora is a thief and leader who finds his reputation and livelihood threatened, and has been outwitted by a shadowy figure known as the Gray King. Set in a city of magic and brutality, built on the ruins of a different city built by vanished creators, with complex politics and tensions, The Lies of Locke Lamora is a classic thievery chess game with the highest of stakes.

Valour and Vanity by Mary Robinette Kowal. The fourth book in the Glamourist Histories series by the talented Mary Robinette Kowal, Valour and Vanity is not my favorite book of the series—but it’s the one that’s kind of a regency version of The Italian Job. When Jane and her husband Sir Vincent are conned and robbed of all of their money and possessions while traveling abroad, the couple struggles to provide for themselves in order to return home—all leading to a glorious heist involving fake beards, nuns with magic, and double-crosses.

Star Wars: Scoundrels by Timothy Zahn. Not only does this book feature one of my favorite Star Wars novelization covers ever (Han! Chewie! Landooooo!), but it follows three rogues as they try to find a way to get the credits that Han owes Jabba the Hutt—by stealing it from other dangerous criminals. Set in the aftermath of A New Hope, Scoundrels follows Han as he assembles a team to infiltrate the Black Sun crime syndicate—Chewbacca and Lando included, of course. This particular Star Wars novel can be read as a standalone (not always true of the old, very deep and involved Expanded Universe books), and doesn’t feature any Jedi/Sith drama or talk of the Force. No, this is a straight-up heist story in the vein of Ocean’s Eleven, following three favorite scoundrels on an adventure in a galaxy far, far away. What else could you ask for?

There you have it—my list of favorite SFF heists. Any other recommendations?