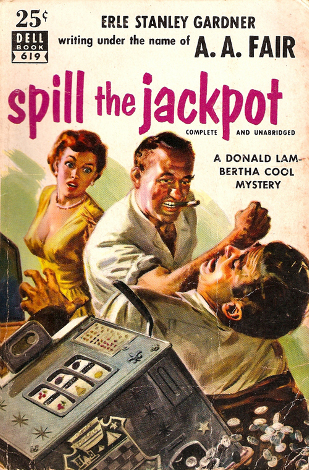 Thanks to the popularity—even today, in reruns—of the TV series Perry Mason, most people think of Erle Stanley Gardner solely as the creator of that extraordinarily successful Los Angeles criminal attorney played by Raymond Burr.

But before shuttering his own legal practice and becoming a full-time writer, Gardner also penned dozens of short tales (many for Black Mask magazine) about other protagonists, from both sides of the law. “Phantom crook” Ed Jenkins, “human fly” detective Speed Dash, gentleman thief Lester Leith, millionaire adventurer Sidney Zoom, confidence man Paul Pry, crusading defense attorney Ken Corning—all of those, and more, were given promising birth amid the clackety-clacking of Gardner’s typewriter. In the 1930s and ’40s, he also rolled out nine books about Doug Selby, a small-town district attorney who might have been a better adversary for Mason than the oft-humbled Hamilton Burger.

It was a mismatched pair of private eyes, though, who really became Mason’s rivals for Gardner’s workaholic heart.

In 1939, after publishing more than a dozen Mason novels, yet still feeling financially insecure, the author released a comparatively lighthearted detective yarn, The Bigger They Come, under the pseudonym A.A. Fair. (He suggested in correspondence that the moniker was short for “Artrin A. Fair.”) The Bigger They Come introduced a new brace of series leads: Donald Lam, a brave and “brainy little runt” of 29 years and 127 pounds, who, after losing his license to practice law, was hired on as the principal operative at B. Cool—Confidential Investigations in LA; and Bertha Louise Cool, the bad-tempered, 60-something, 275-pound proprietor of that sleuthing agency, which she’d inherited from a philandering husband.

Although they worked well together (enough so that they eventually became business partners), Cool and Lam quarreled incessantly. They bickered about money (Bertha was a cheapskate of world-class designation). They bickered about Donald’s taste in women (she thought he fell for the beautiful ones far too easily). They bickered about his tendency to keep her in the dark as cases developed. They bickered about, well, pretty much everything. That dynamic, added to the characters’ odd coupling, their fast-flowing banter and Bertha’s tendency toward outlandish exclamations (“Kipper me for a herring!”; “Peel me for a grape!”), earned the A.A. Fair books a loyal following, and made them distinct from Gardner’s more serious (and, at least in the beginning, more hard-boiled) Mason tales. Nonetheless, it didn’t take readers long to savvy the Gardner-Fair relationship.

Fairly typical of the A.A. Fair works is 1941’s Spill the Jackpot, the series’ fourth entry. It finds the detecting duo departing a sanitarium where Bertha had been treated for the flu and pneumonia—and slimmed down to an astounding 165 pounds in the process—in order to meet a new client in Las Vegas, a town that back then still existed very much in the shadow of Nevada’s more popular gambling resort, Reno.

The client’s name is Arthur Whitewell. He heads a Los Angeles advertising agency and has one son, Philip, who’s recently fallen hard for a young woman named Corla Burke, employed as the secretary to an aircraft company executive. The couple were set to be married. However, one day Corla suddenly vanished from her desk, leaving behind a handbag but no note. The only clue to her whereabouts might be a letter she’d received shortly before her disappearance from one Helen Framley of Las Vegas. Miss Framley, though, claims never to have heard of Corla Burke, much less sent her a missive of some sort. With Philip Whitewell distraught over this whole affair, his father agrees to pay Cool and Lam their usual $25 a day to find the wayward fiancee.

Lam gets right down to work, locating Helen Framley behind a 10-cent slot machine in one of the local casinos. Before he can do much more than appreciate her physical attractions, though, Framley hits the jackpot. When Lam’s nickel machine does the same a few seconds later, casino security swoops in, Lam is laid out flat with a blow to the jaw, and Framley and another guy who’d been playing the slots with them—a big bruiser of a fellow—take to their heels. Lam’s the only one arrested, supposedly for trying to bamboozle the joint.

Erle Stanley Gardner was no slouch at plotting. How he kept every twist and character straight is beyond my mortal comprehension, but his storylines could be more tangled than a hay bale. In these pages, for instance, Lam no sooner breaks free of legal confinement than he dives head-first into uncovering what is apparently a well-oiled scheme to defraud Vegas casinos. From there, we’re offered subplots suggesting domestic violence and corporate chicanery, and faced with the mysterious murder of a fighter on the skids who might have conveniently failed to follow through on a divorce he’d promised his former ever-lovin’.

Oh, and Donald Lam quits his job. He claims he’s lost his heart to Helen Framley and intends to run away with her, much to Bertha Cool’s exasperation. “You can’t pull out and leave me in the lurch this way, and what’s more, you aren’t in love,” she reprimands him. “You’ve just fallen for some little trollop who’s given you the come-hither eye. My God, if you knew as much about women as I do, you’d never even think of marrying one.”

Among the most interesting (though unrealistic) elements of this series is Lam’s tendency not just to solve cases, but to manipulate events in such a way that his interpretation of justice is satisfied. Not surprisingly, his contrivance here to quit Big Bertha’s employment cracks open the case like nothing else might have.

Gardner composed 29 of these boisterous Cool and Lam novels, which seems like a slacker effort only if you dare to compare it with his more than 80 Perry Mason novels. In addition to this book and The Bigger They Come, standouts include Owls Don’t Blink (1942), Crows Can’t Count (1946) and the only installment still in print, Top of the Heap (1952), which was re-released in 2004 by Hard Case Crime. The final Cool and Lam work, All Grass Isn’t Green, saw print in 1970.

If you like detective fiction with tinges of humor and occasional literary spicing (heck, you can even find grammar jokes in these stories!), keep an eye out the next time you’re shopping for used books. So many copies of the Cool and Lam novels were published, and they’re still easy to find.