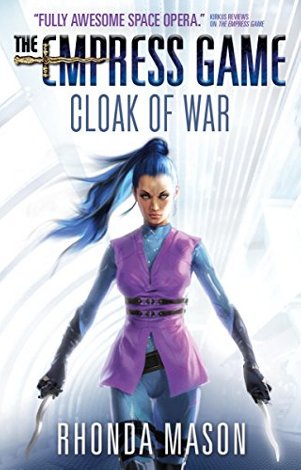 Kayla Reinumon, the pit gladiator formerly known as Shadow Panthe, has done the impossible: she, with the help of a shadowy government agency, has won the Empress Game. A tournament between women vying for the hand of the Emperor Apparent and a voice on the Imperial Council of Seven, the Empress Game is a fight, often to the death. Because of her skills as a fighter—Kayla is a Wyrd ro’haar, sworn protector/bodyguard and psionic shield to her younger brother il’haar—she was chosen to impersonate the Princess Isonde and take her place in the Game. In return for securing Isonde’s seat on the Council, Kayla was promised safe passage and protection to return to Wyrd space, and safety from another Wyrd name Dolan—the traitor who tortured her family, betrayed her people, and ripped their psionic powers away for personal gain.

While Kayla pulled off her end of the bargain smoothly, winning the tournament and beating the best fighters from across the Empire, things got a little messy on the other side. Princess Isonde was attacked and now lies paralyzed and comatose, and while her husband-to-be and the few who know the truth desperately hope that a cure can be found, Kayla fears that Isonde will never recover… meaning Kayla’s impersonation act may become permanent. Torn between the responsibility she feels to Isonde and her political cause, and the loyalty she feels to her brothers who are hurtling towards Wyrd space and away from the dangers of the Imperial core worlds, Kayla questions who she is and what she wants. When news that the deadly Tetratock Nanovirus (TNV) has spread to the internal sovereign planets of the Empire, the fate of the Wyrds with their exceptional understanding of nanotechnology lies in the balance. Kayla must fight for herself and for her people, to protect her world—never mind that she must sacrifice her love for her brothers, for her lover, in the process.

The second book in the Empress Game trilogy by Rhonda Mason, Cloak of War leaves the Arena but extends the game stratagems on a larger scale of political intrigue. Not only must Kayla grapple with her own identity and balance the political necessity of impersonating Isonde, but a deadly and incurable virus ravages the Empire with Wyrd safety and independence precariously dangling in the balance. Like The Empress Game, Cloak of War is high stakes space opera, and Kayla remains very much the hero of this story. From a character perspective, Cloak of War does a phenomenal job of building Kayla’s internal struggle—by sacrificing the people she loves for the greater good of the Wyrd people, what does she lose in the transaction? By pretending to be Isonde for so long and being so complicit with the falsehoods of those she considers her allies and friends, how dangerous and precarious is her situation should the truth ever emerge? These questions, and the balance of power that is wielded by Isonde, are provoked and answered in this second novel.

This book isn’t just about Kayla, though, as her narrative is interwoven with a few other characters’ this time around—my favorites were Malkor Rua (senior agent of the Imperial Diplomatic Corps and Kayla’s lover) and Vayne (Kayla’s twin, long presumed dead but finally free from imprisonment and torture at the hands of Dolan). Each of these related storylines are powerful in their own way, and I appreciated that layer of depth and richness added to Kayla’s narrative. Similarly, I liked the larger picture approach to the Empire and its political intricacies in this second novel—we finally get to see the Imperial Council as Kayla wins her seat at the table, and the trappings of such power.

There are just two complaints I have for this second book. First, I miss the arena and fighting of The Empress Game and the action therein. I wish that some of that rawness bled over to this second novel (though when the fighting does finally happen, it’s great). Second, and more importantly, I was disappointed with one of the big turns in plot and character motivations therein. I believe the political power grab and the reasoning behind this particular character’s decisions; I simply wish that the story had gone in a different way. That said, this is the second book in a trilogy—and there is plenty of ground to cover in the third, concluding volume.