Here is Your Guidebook for 2019's Exciting Lineup of Science Fiction, Fantasy and Horror 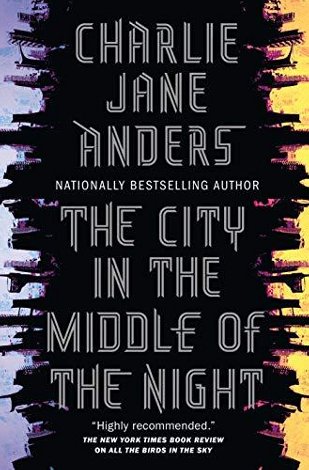 Welcome to a new year of reading! I said in last week's roundup of January's Best science fiction and fantasy reads that 2019 was shaping up to be a great year for science fiction and fantasy. How do I know? Because I found hundreds of titles slated to be released this year. Keeping in mind that publishing dates are tentative, here are the SF/F books to watch for so far...

In February, look for The City in the Middle of the Night, in which Charlie Jane Anders imagines a harsh world where humanity lives on the sliver of inhabitable land between deadly heat and frozen wastelands. Also look for an expanded edition of Always Coming Home by Ursula K. Le Guin, a 1985 classic that shows a post-apocalyptic California framed as an anthropologist's report of the survivors of an ecological catastrophe. February is overflowing with excellent fantasy, too. Ann Leckie offers The Raven Tower,a new epic fantasy that shows what happens when gods meddle in the affairs of humans and vice versa. The Priory of the Orange Tree by Samantha Shannon is about a world on the brink of war with dragons and the women who must valiantly lead the fight to save it. Jenn Lyons's epic The Ruin of Kings sees a thief being declared the missing son of a treasonous prince, a path that could lead to the destruction of the empire. The Ingenious by Darius Hinks is an epic fantasy in which desperate political exiles attempt to escape a city set adrift in time and space by alchemists. For the Killing of Kings by Howard Andrew Jones, the first book in a new adventure trilogy, the uneasy peace between the people of Darassus and the deadly Naor hordes will be broken unless a quest to retrieve a sword is fulfilled. Meanwhile, Where Oblivion Lives by T. Frohock depicts a supernatural war between Nephilim and daimons in 1932 Spain and Germany.

On the horror side of the literary spectrum, look for Black Wings by Megan Hart, which explores the relationship between a girl at a school for the gifted and the raven through which she is able to record memories. All Roads End Here by David Moody is a dark horror novel about humanity's fight for survival amidst an impending apocalypse.

Short fiction readers should be on the lookout for The Very Best of the Best: 35 Years of The Year's Best Science Fiction by Gardner Dozois, a spectacular, must-read sampling of the best science fiction to have appeared in the past thirty-five years. In Broken Stars: Contemporary Chinese Science Fiction in Translation, editor Ken Liu brings excellent and recent Chinese science fiction to English-speaking audiences. (You can read the introduction here.) Death & Honey by Kevin Hearne, Lila Bowen & Chuck Wendig is a collection of three novellas each set in the worlds of their respective author's fantasy series. Finally, The Outcast Hours by Mahvesh Murad & Jared Shurin looks at the lives of people who live their lives at night.

March brings another fresh bundle of speculative fiction goodness. If you're looking to get in on the ground floor of an exciting new space opera, check out Ancestral Night by Elizabeth Bear, in which a space salvager and her partner make an astounding discovery. Kameron Hurley posits a future war scenario in which soldiers are converted to light to quickly transport them to the front lines of Mars in The Light Brigade. The Chaos Function by Jack Skillingstead uses futuristic tech and time travel to explore the dangers of changing the past. A galactic-scale Cold War threatens the galaxy in Dan Moren's amusing and fast-paced thriller The Bayern Agenda. Starport by George R. R. Martin & illustrated by Raya Golden is a graphic novel adaptation of a TV pilot script Martin wrote about a life at a Chicago gateway to the stars. String City by Graham Edwards posits parallel worlds with alternate realities in which a gumshoe detective sets out to solve a casino heist but ends up racing to stop an apocalypse. Meanwhile, Zero Bomb by M.T Hill asks: what do we do when technology replaces our need to work? Two notable sf sequels come out this month: The Rosewater Insurrection by Tade Thompson—follow-up to Rosewater, one of last year's best books—continues the story of an alien-occupied biodome in Nigeria; and Tiamat's Wrath by James S. A. Corey, the latest entry in the popular Expanse series, in which humanity continues to build its interstellar empire in the alien ruins despite the ever-increasing mysteries and threats.

On the fantasy side of the aisle, check out The Women's War by Jenna Glass, which depicts unrest in a patriarchal society in which a revolutionary spell gives women the ability to control their own fertility. Sarah Beth Durst's The Deepest Blue, a standalone fantasy novel set in her Queens of Renthia universe, is about a magical island in an ocean full of malicious spirits. Titanshade by Dan Stout, described as a noir fantasy thriller, offers readers a police procedural in an alternate urban fantasy setting. Kim Harrison's Perfunctory Affection questions our quest for perfection, especially when said perfection may not even coincide with reality. The Near Witch by V. E. Schwab, a reprint of the now-popular author's debut, mixes horror with fantasy in a story about disappearing children and a legend about a witch that just might be true.

On the short fiction front, seek out New Suns edited by Nisi Shawl, a speculative fiction anthology by emerging and seasoned writers.

Two dystopian thrillers worth checking out this month: Motherland by Lauren Beukes posits a future America transformed by a super-virus that has decimated the male population; and The Last by Hanna Jameson, a whodunnit set in a Swiss hotel against the backdrop of a world descending into nuclear war. Finder by Suzanne Palmer is a science fiction caper featuring an interstellar repo man. Waste Tide by Chen Qiufan (and translated by Ken Liu) offers a thought-provoking story about the disastrous effects of climate change. C. A. Fletcher's A Boy and His Dog at the End of the World follows a boy's search for his missing dog in a post-apocalyptic world. Emily Eternal by M. G. Wheaton is about an artificial intelligence designed for emotional support that may actually be the answer to saving the human race from its dying sun. The Luminous Dead by Caitlin Starling cleverly blends science fiction and horror when a caver finds herself fighting for survival on an alien planet.

Fantasy fans can look forward to some great reads as well. Monster hunter Maggie Hoskie contends with a mysterious cult in Storm of Locusts by Rebecca Roanhorse, sequel to last year's hit, Trail of Lightning. Seven Blades in Black by Sam Sykes features an outcast magician seeking revenge on the seven wizards who stole her powers. Tessa Gratton continues her story inspired by Shakespeare's Henry IV in Lady Hotspur...as revolution, love and betrayal corrupt the descendants of two warring kingdoms. Eddie Raven is a man who is pursued by dark forces across space in time in Mike Resnick's The Master of Dreams, the start of a new fantasy trilogy. Pola Oloixarac's magic realism story Dark Constellations looks at human evolution and the quest for greater knowledge. Ashok K. Banker's Upon a Burning Throne sees an Empire fighting for survival as the competence of the ruling family is questioned.

Come back next week for more great titles to look forward to in 2019!