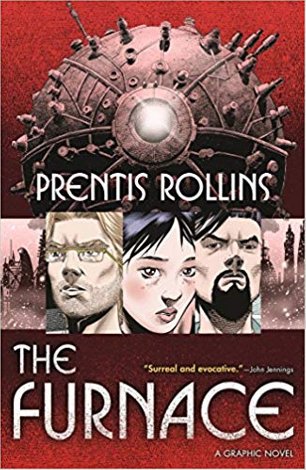 Science fiction, like any literature, can be many things. It can be escapist entertainment, a prediction of the future, a personal wake-up call, or even Literary with a capital "L." But the best science fiction makes us think about the real-world around us. That's the power of science fiction—it removes us from the present so we can see it objectively from the outside.

Prentis Rollins's new science fiction graphic novel, The Furnace, will make you think. In this case, Rollins sets out to depict how incarceration may be affected by technological advances. Here, a government program called GARD (Gravitationally Autonomous Restriction Drone) uses a floating sphere to act as a mobile prison for society's criminals. The drone renders the prisoner invisible to onlookers thanks to some hand-wavey science and a set of cameras that stud its surface. It's mobile too—it hovers "exactly one meter behind and point five meters above the prisoner's head" and rotates around them so they can never see their mobile prison guard. This allows prisoners to move about society unseen and unheard within the limits of movement imposed by the drone's software—enforced by electric shock that immobilizes the prisoner should they decide to test its boundary limits. The motivation here is to alleviate the crowding in prisons and eliminate the huge cost of maintaining them.

But in place of prison guards come the scientists who work on the project. That's how we meet the two main characters in The Furnace. Walton Honderich is an up-and-coming physicist in his early twenties when he first meets professor Marc Lepore, himself a noted physicist. Marc has been hired by the government to write the security software for the GARD devices. Marc enlists Walton to test it. At first, the glamour of the new technology is intellectually intriguing to Walton, but the impact of what they are doing to criminals begs to be questioned. The prisoners essentially walk around like ghosts, never seen and unable to interact with anyone. What is the long-term effect of this new form of solitary confinement, one that happens in plain sight? Despite being people who have committed crimes, they are still people with basic human rights. What ethical issues surround this scenario?

Walton and Marc exchange some dialogue about this across a few conversations throughout the book. Marc, a complicated character we see from flashbacks to his youth, is driven to complete the project. Walton, meanwhile, is wracked with guilt. Readers already know the long-term effects on Walton; the book opens by introducing him as a drunk in his late forties. Much of the story is told in flashback (and flashbacks within flashbacks). Walton has difficulty living with his involvement in the GARD project, which doesn't go quite as smoothly as planned. We only see a few glimpses of the government machine that's driving the program. It's never given a face. The only faces we see are those of Walton and Marc and they're just one more cog that lacks accountability. Thus, the reader feels sympathy for Walton, though perhaps less for the people he feels guilty about. The impact of the GARD program on these walking ghosts would have been more prominent had we seen some of the story from their perspective.

Nevertheless, The Furnace is still stimulating. The focus on Walton gives the story a relatable foil through which to see the impacts of our decisions and the potential pitfalls of technological solutions. (As a geek, I was thinking of ways I could hack the GARD and subvert it. Y'know…should I ever commit a crime and be incarcerated by an autonomous drone that would render me invisible.) Rollins does a good job of presenting the moral dilemmas and showing the societal impact of a mobile, floating prison; especially once the program hits a snag and the backlash begins.

Rollins has also created eye-catching art to accompany his cautionary tale. A heavy leaning on pencil strokes for shadows accents the confident outlines of objects and people in the foreground. And the amount of detail in the background is quite impressive. A handful of "solid background" frames that convey textures also pop out from the page. The color palette is a bit muted, which matches the dark tone of the story being told just fine. It's all just eye candy for one part of your brain, while another is thinking about the meatier questions posed by the thought-provoking premise.