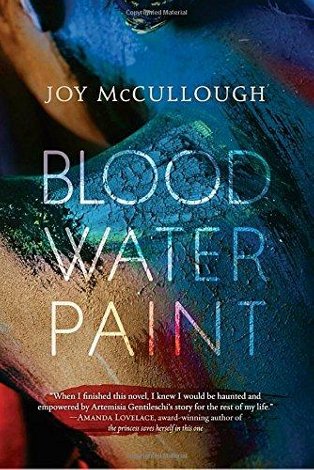 But he’s strong, and powerful, and from most perspectives, he’s on the winning side. She has to ask herself—and women have asked themselves this question for centuries—would she rather be suffocated slowly for the rest of her life, or die quickly trying to accomplish something?
(What would you choose, love?)
There will be no more asking questions once a sword is in her hand.

Blood Water Paint is based on the most well-known period of Italian Baroque painter Artemisia Gentileschi’s life. During her late teens—in 1610 and 1611—a trusted tutor raped her, a crime that led to a lengthy court case in which she was forced to undergo literal torture before the court even considered the idea that she could possibly be telling the truth.

I was already quite familiar with Artemisia Gentileschi’s story, and I’m still reeling from this book.

Some of that reeling stems from the fact that it’s a debut novel. The craft here, and the layering—of form, of story, of perspective and memory and experience, of connections to conversations and debates and frustrations of the current day—is impeccable. And the layering is all the more beautiful—and appropriate—in a book about the physical act of painting, an art form that’s all about layers. McCullough gives us description after description of the process and time it takes to simply prepare a canvas for paint—the invisible work, the work that precedes what we usually think of as The Work.

In other words, Blood Water Paint is the story of a girl in the world, but it’s also the story of creation, of the time and care and tenacity it requires.

She tells us about her mother, about losing her too young. Her memories of her mother—and more specifically, her memories of the stories her mother told her when she was young—are still with her, and are a source of solace and strength and inspiration. McCullough gives us those memories directly, in her mother’s voice—we experience them as Artemisia—in prose, rather than in verse. It’s all incredibly effective, and like the arc of Artemisia’s story, those passages provide commentary on the current day—from society’s low bar of what defines a Good Man (Well, at least he’s not a wifebeater!) to the knowledge that predators aren’t always easy to spot, because they don’t always hide in the shadows.

Conversations around Gentileschi’s art almost always eventually come around to the importance of perspective, of who is telling what story—and any reader who is tuned in to the related ongoing conversations in the publishing world will find the parallels impossible to ignore:

Father’s made attempts at Susanna,
just like the other painters—men—
who think they have the right
to tell the story of a woman

But one can’t truly tell a story

unless they’ve lived it in their heart.

There’s more, of course. Punishment through objectification. Assumed ownership. People in positions of power stepping on those with less power to take what they want. Gaslighting. Complicity through inaction. The expectation that women be on guard at all times and in all places, rather than simply teaching men to… not be vile? The mindset that the problem lies with the person who is assaulted, not with the person who commits the assault.

Read with Elana K. Arnold’s Infandous and Isabel Greenberg’s The One Hundred Nights of Hero for a deep dive into female rage, the importance of perspective in art, and the power of the secret stories that women whisper to one other in the dark.

One last note! While the Kirkus review is largely positive, it also argues that “those who lack familiarity with the historical facts or context may emerge from this fire scorched but not enlightened,” and I entirely, entirely disagree. McCullough weaves facts and historical context into her heroine’s narration, into the dialogue, into Artemisia’s memories of her mother’s stories, and careful readers—yes, even those who have never heard of Artemisia Gentileschi—will have no trouble keeping up. McCullough has trust in her reader’s abilities—as well as respect for their intelligence—and her refusal to condescend is a good thing, not a drawback.