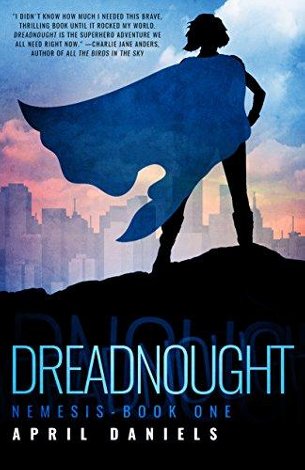 You have zero obligations here, do you understand? This isn’t like political power—you didn’t fight for this; it was dropped in your lap. So all those great responsibilities that come with great power, those are only yours if you want them to be. It’s not fair to demand more of you, and worse, it’s not safe.

Fifteen-year-old Danny Tozer is sitting in an alley behind a mall painting her toenails—she hasn’t come out as trans to her parents or peers, and this is currently her way of safely expressing her gender identity—when Dreadnought, one of the world’s most powerful superheroes, dies in front of her.

Just before he dies, he passes his powers over to her. And suddenly, she finds herself not only incredibly powerful, but also—because the Dreadnought mantle remakes its bearer into their most ideal self—physically female, in a body that looks and feels the way she’s always felt in her heart, soul, and mind.

For a girl who already had a pretty full plate, she’s suddenly juggling a million more things—including a crash course in Superhero Politics, figuring out how to explain this all to her not-remotely-supportive parents, and, you know, school—and that’s before the whole End Of The World scenario kicks in...

HOW DID I NOT FIND THIS BOOK SOONER??? It’s across-the-board fantastic. Let me reiterate: ACROSS-THE-BOARD FANTASTIC. It’s been out for an entire year, and I’m flabbergasted that I haven’t seen more buzz about it. In ADDITION to cinematic, emotionally-charged action sequences, Danny’s characterization is beautifully layered, the dialogue is top-notch, and Daniels writes with warmth and humor and verve.

And there’s more to love than that:

Superheroes as real people. As in Kurt Busiek’s Astro City, the superheroes in Dreadnought are human beings, and some of them are pretty horrible. I was so very excited to meet Graywytch, for example, because she’s a magic user who walks around with a RAVEN ON HER SHOULDER (so cool!)...but then she opened her mouth and revealed herself to be a hateful, garbage-y bigot.

Politics within the superhero world. It’s not just good and bad! As in the Canadian show Lost Girl, the major players are eager for Danny to take a side, but also as in Lost Girl, the more she learns about her new world, the more complicated she realizes her choice will be.

The insidiousness of psychological and emotional abuse. Danny’s father is flat-out rotten. She’s lost partial hearing in one of her ears because of the way he screams at her, and over the course of the book, he gaslights and threatens and insults and belittles her again and again and again. Those scenes are horrifying and painful on their own, but we also see how his words and actions weigh on her even when he’s not there—we see how his abuse affects her, makes her question herself and her own self-worth at school, walking around town, in fights with supervillains.

Sexism. Danny has known that she’s a girl for years, but before her run-in with Dreadnought, she hadn’t been seen—or treated—as a girl by others. Once the rest of the world starts treating her as a girl, she realizes that it really sucks to be in the middle of having your life fall apart and be told by some rando on the subway to “Smile, it can’t be that bad.”

Comfortably familiar while still fresh. There are analogs to familiar superheroes like Batman and Valkyrie here—and references to famous lines like “with great power comes great responsibility”—and through them, Daniels gives comic fans in-jokes while also telling a story that is entirely accessible to non-comics readers.

You’d better believe that I’ll be reading the sequel, Sovereign—like Dreadnought, it received a star from Kirkus!—as soon as superhumanly possible.