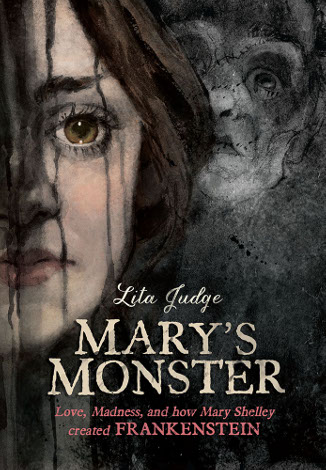 where there is nothing to hold on to

to keep from slipping off the edge of the world.

But then the dark presence of another begins to whisper

from the corners of my mind,

and his shadow grows and touches my own.

Together, we take one step toward finding a word,

until the struggle drops away

and the only thing that is left

is everything that matters.

That’s a long excerpt to open with, but I loved it so much that I had to share it: “...the only thing that is left/ is everything that matters…” is a beautiful—and, yes, passionately idealistic—way of describing both the drive to create and the time and hard work it entails.

Mary’s Monster, as I’m sure you’ve gathered from the subtitle, is about Mary Wollstonecraft Shelley, her youth, her relationship with—and later, marriage to—Percy Bysshe Shelley. And, of course, it’s a story about her most well-known creation, Frankenstein; or, The Modern Prometheus. It’s a heavily illustrated—three hundred pages with full black-and-white spreads all the way through—biographical novel told in linked poems, largely through Mary’s voice.

In the extensive backmatter, Judge talks about her research and her personal interpretation of the historical record—including the reasoning that led to said interpretation. Which is a choice that warms my nerdy little heart. Even better, she includes six full pages of notes that direct readers back to her various primary and secondary sources, allowing us to—if we so choose—follow right along.

On to the actual body of the book! In Mary’s Monster, again and again, Judge shows us interactions and events from Mary Shelley’s life, and again and again, she ties them into the themes in Frankenstein—and she does an impressive balancing act, always showing Mary Shelley as a human being first, and as the creator of a most-beloved book second.

She writes about the guilt and pain Mary Shelley felt about her own birth—her mother, Mary Wollstonecraft, died due to complications after childbirth—and the pain and guilt her Creature experienced as a side effect of his very existence.

She writes about double standards, injustice, hypocrisy, and idealism versus realism—sometimes drawing the connections between Mary Shelley’s life and Frankenstein for the reader, sometimes allowing the reader to make the connections on their own.

And, on a more personal level, she writes about how Percy Bysshe Shelley was quite possible the Worst Travelling Companion of All Time; she shows his behavior in a way that, in a soap on the CW, would immediately identify him as Someone To Avoid Romantically.But! She also shows their intellectual and physical connection in a way that makes Mary Shelley’s choices understandable. (Or, well, mostly understandable.That part is going to absolutely depend on the reader. Personally, I get it for her, but I still want to throw him down a well.)

There are a couple of missed opportunities worth noting. First, Mary Shelley’s stepmother is written as a straight-up, no nuance, Wicked Stepmother. While that tracks from the perspective the book takes, the backmatter indicates that Mary Jane Clairmont Godwin was a far more complex and interesting figure than the portrayal suggests—relegating her to a standard two-dimensional archetype feels especially unfortunate in a book that is so steeped in feminist thought and ideas. Secondly, while she very much looks at gender, Judge doesn’t engage much with the complexity of how economic and social class factored in, especially in regards to Percy Shelley and Lord Byron. (Speaking of people I want to throw down wells. Ugh, Byron.)

Nutshell: A few quibbles, but hugely enjoyable over all. (Also, and finally! I very much appreciated that Judge allowed herself to go Full Overwrought on occasion, which is so extremely appropriate in a book about the writing of one of the world’s most famous Gothic novels.)