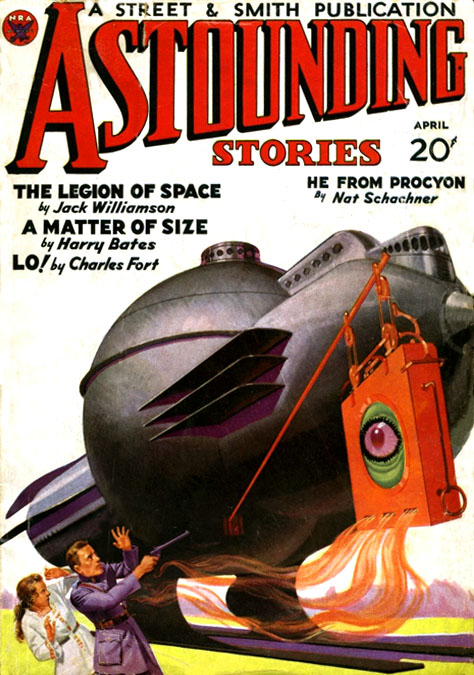 In the last couple of years, there seems to have been new boom in space opera stories—epic tales that pit humanity against the universe. We’ve seen the enormous successes of books such as The Expanse series by James S.A. Corey and Ann Leckie’s Imperial Radch seires. Major films such as Jupiter Ascending and Star Wars, and television events such as The Expanse, are hitting the big screen. Space opera has an incredibly long tradition within genre fiction, and one of the biggest names in the field is Jack Williamson.

John Stewart Williamson was born on April 29th, 1908, in Bisbee, Arizona Territory, where he spent much of his childhood. His parents came to the American Southwest seeking the opportunities that the new territory presented, but what they found was a difficult existence, the challenges of farming, unrest in Mexico, and attacks from local Native American tribes complicating their lives. Williamson and his siblings escaped from their bleak existence through the radio dramas they listened to and through their own imaginations—it wasn't until 1920 that Williamson began to attend public school. Growing up largely alone, Williamson was a shy and gawky teenager who faced taunts from his fellow classmates. He eventually graduated from high school in 1925 with some vague intentions to pursue studies in science.

However, at the age of 18, a friend gave him a copy of a new magazine: Amazing Stories, edited by Hugo Gernsback. The magazine and its bright cover attracted Williamson and he tore into the stories he found inside. In particular, he was drawn to a pair of reprinted stories by A. Merritt: “The Moon Pool” and “The Conquest of the Moon Pool.” The stories and the author’s style captured his attention so completely that Williamson decided that what he wanted to do with his life was to become a science fiction author. He began to emulate the stories and mail them out to the growing number of Amazing Stories imitators on the market, and gathered up the resulting rejections.

In the fall of 1928, Williamson enrolled in classes at the West Texas State Teachers College at Canyon, Texas, and while there, he received a copy of the December issue of Amazing Stories. In it, one of his stories, “The Metal Man,” was featured on the table of contents. He lasted two years at college before dropping out to immerse himself full time in the growing science-fiction world, corresponding with fellow fans and writing new stories of his own.

When Hugo Gernsback lost Amazing Stories to his creditors, Williamson followed him to his new publication, Science Wonder Stories, with a major serialized story beginning in the July 1929 issue. A two-part story titled “The Green Girl” also appeared in the March and April 1930 issues of Amazing Stories. Williamson's early stories were heavily influenced by A. Merritt and were fantastic and romantic escapes into strange new worlds. His writing style was a major selling point: Merritt's stories were staples in the early speculative pulp circles, and Williamson had tapped into a vein that captured the attention of readers. According to Sam Moskowitz, Williamson was "to become the author bridging the gulf between the school exemplifying purse escape in the tradition of A. Merritt, Edgar Rice Burroughs, Otis Adelbert Kline, and Ralph Milne Farley, and the group then currently focusing on ideas which Hugo Gernsback strove to include in his magazines." In his history of science-fiction magazines, Time Machines: The Story of the Science-Fiction Pulp Magazines from the Beginning to 1950, Mike Ashley notes that "Jack Williamson was Gernsback's most enduring discovery. No one could have anticipated at the time that Williamson would go on to produce high quality science fiction for over seventy years....He would soon develop a voice of his own and within a few years, he was rated as one of the leading writers in the field."

In the early 1930s, Williamson's pace continued unabated, churning out dozens of stories. He corresponded with his idol, Merritt, who encouraged him and even began some short-lived collaborations which never materialized. By this point, however, Williamson had begun to change his style. He started exchanging letters with Miles J. Breuer, a doctor and hobbyist science-fiction writer from Nebraska, who encouraged Williamson to improve his writing. The pair eventually collaborated on a short novel, The Birth of the New Republic, which appeared in the 1931 winter edition of Amazing Stories Quarterly. Williamson acknowledged his help in improving his work: "Breuer was an antidote to my own tendency towards unrestrained fantasy. He insisted upon solid plot construction, upon the importance of real human values in character, and upon the element of theme."

Williamson was in many ways stuck between two worlds. His writing output was impressive, but the major outlets for which he wanted to write, namely Argosy, (which had published his idol, Merritt), rejected his work, particularly a story titled “The Legions of Space.” Fortuitously, he received a letter from a friend, Desmond Hall, who was assisting F. Orlin Tremaine at a new pulp magazine, Astounding Stories. Having just launched in October 1933, they were in desperate need of stories. Williamson “dashed out three shorts and a novelette, all of which they bought, then learned the magazine was altering its policy to run long novels. So, he shipped out The Legion of Space as well.”

This space opera adventure, which followed an interstellar police force tasked with keeping order in the universe, was heavily inspired by Alexandre Dumas’ The Three Musketeers. Much like similar stories by fellow author E.E. 'Doc' Smith, Williamson's Legion stories featured dashing heroes and heroines, advanced superweapons, strange aliens, and more. Willliamson’s adventure tales, as well as new stories from Smith and newcomer John W. Campbell Jr. put Astounding Stories on the map. According to Mike Ashley, "[‘Skylark of Valeron’ (Smith) and ‘The Mightiest Machine’ (Campbell)] plus Williamson's 'The Legions of Space' showed the maturing of Space Opera. They might still contain super-scientific concepts, but now, they were harnessed and under the control of humanity, rather than running amok as in earlier stories." As tastes in science fiction continued to change, Williamson adapted as well, adopting some of the more realistic conventions which magazines such as Astounding began to require.

It's no coincidence that space opera stories came from authors who had grown up in the American heartlands or the western territories. Edgar Rice Burroughs, who had set his stories among the planets of the solar system, trained as a cavalry scout, while Smith had grown up in Idaho, and Williamson in Texas. The transposition of the Amercian Wild West on the solar system and beyond is evident in the earliest works of space opera. Even the term “space opera” is derived out of Western literature tradition. According to one fan in the early 1940s, a space opera came from the mash-up of poor quality Westerns and the radio soap opera stories: "For the hacky, grinding, stinking, outwork space-ship yarn, or world-saving for that matter, we offer ‘space opera.’” The insulting term, according to David G. Hartwell and Kathryn Cramer in their anthology The Space Opera Renaissance, didn't apply to practitioners such as Smith and Williamson, who were acknowledged leaders in the field, and they would even move to claim the title for their own: “I like to use 'space opera' as a label for the whole literature of man in space, a great epic tale of discovery and expansion across the galaxy.”

These stories helped to set the stage and tone for science-fiction writers for decades to come: some emulating and building upon the ideals of humans in space, such as Alfred Bester, Jack Vance and James Blish, while others worked explicitly against genre conventions during the New Wave movement, such as Michael Moorecock and Thomas Disch, declaring space to be a dead end for a dying genre. Both arguments had their merits, but neither entirely took control of the conversation.

Williamson made important strides in the evolution of science fiction, serving as a direct link between the early pulp fantasists of the early 1910s who worked in a genre that was only just starting to solidify, and the so-called “Golden Age of Science Fiction,” during which authors began to work in a genre whose elements had largely been defined. He, along with other pulp authors who wrote throughout the 1920s, helped to set down genre conventions and tropes upon which the next generation of science-fiction authors based their work.

Williamson would later return to school following his service as a weatherman for the US Army during World War II. He attended Eastern New Mexico University in the 1950s, where he obtained his Bachelor and Masters level degrees in English, before proceeding to the University of Colorado, where earned his Ph.D. in 1964. From there, he taught some of the first college-level courses on the science-fiction genre, all the while writing literally hundreds of short stories, novels and critical works over his decades-long career. He died on November 10, 2006, in Portales, New Mexico.