From Langston to Lollipop 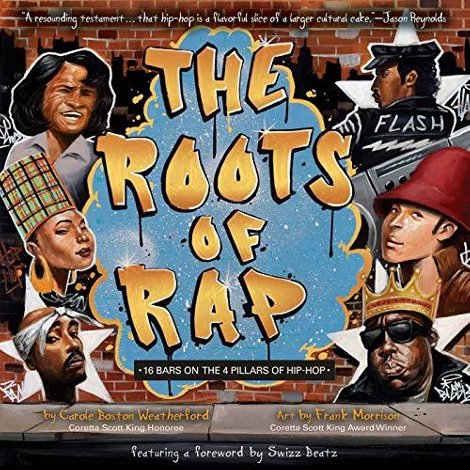 “Hip-hop and rap aren’t often featured in children’s books,” writes rapper, DJ, and record producer Swizz Beatz in an introductory letter to readers in Carole Boston Weatherford’s The Roots of Rap, illustrated by Coretta Scott King Award winner Frank Morrison. Two new picture books (one on shelves and one coming soon)—Weatherford’s and one for even younger readers, Hip-Hop Lollipop—aim to change that.

Weatherford’s book, sub-titled 16 Bars on the 4 Pillars of Hip-Hop, will be on shelves early to mid-January, and expect your students and other children you know who are fans of hip-hop and rap to flock to it. Written in rhyme, poet Weatherford—who writes in a closing Author’s Note that “hip-hop is poetry at its most powerful”—pays tribute to rap and lays out its history, kicking things off with none other than nods to famed American poets Langston Hughes and Paul Laurence Dunbar. “Folk tales, street rhymes, spirituals” are rooted, after all, in “spoken word. Props to poets Hughes and Dunbar; published. Ain’t you heard?” Here, Morrison illustrates a contemporary teen wearing a t-shirt that references Notorious B.I.G.’s “It Was All a Dream,” released in 1994.

From there, we meet James Brown, “giving birth to funk”; head to the 1970s, where rappers “start to rule”; see B-boys breakdancing; watch a Jamaican deejay inventing what we today call “dub”; pay tribute to DJ Kool Herc, considered the “Father of Hip-Hop”; and read about or meet rappers who made names for themselves from the late ‘70s to present day, including Kurtis Blow, LL Cool J, Eminem, 50 Cent, Tupac, Salt-N-Pepa, and Queen Latifah. Morrison’s vibrant portraits of many of these legendary hip-hop and rap artists, rendered via oils, include reverent details and, with expressive body language and dramatic close-up perspectives, capture the key players of the art form that is rap.

And given that rap and hip-hop are change-makers in the realm of pop culture and social justice—Weatherford notes at the book’s close the “bold social commentary” of a rap that resonated with her in 1982 and also refers to rap as “the language of global youth culture,” adding that hip-hop intersects with not just the arts, but also politics, commerce, and pop culture at large—Morrison weaves into his paintings such things as risk-taking NYC graffiti artists, tagging subway trains, and an image of the back of a man’s jacket that sports a Black Spade symbol. (The Black Spades gang originated in the Bronx in the late ‘60s and were influenced by the teachings of Malcolm X.) In one illustration, a man holds a sign that reads “Tracy 168,” honoring one of the founding fathers of graffiti art. Black pride infuses every word and every inch of the canvases here. In his Illustrator’s Note, Morrison writes:

“What I admire about this culture is the diversity, the ingenuity, the sheer tenacity

to rock forward regardless of what is in front of it. The hip-hop generation never

listened to ‘can’t’ and to this day, refuses to take no for an answer. We battle for

greatness on the block, the streets, and in the neighborhood ….”

Susan McElroy Montanari’s Hip-Hop Lollipop, another picture book in rhyme but for much younger readers, is paired with the exuberant illustrations of Brian Pinkney. There, essentially, could be no better choice for illustrator; it is always with grace that Pinkney captures people in movement and, particularly, people dancing.

In this case, the dancing one is a young girl, whose family calls her “Lollipop,” or “Lollie.” She has a small boom box in hand and can’t stop dancing to hip-hop. “Hands tutting. Knees jutting. Arms cranking. Body swanking. Hip gyration. Exultation!” She can’t stop moving, and it’s infectious. Even the dog and cat join her, and eventually her sister (though techno is more her jam) joins in.

On it goes. Just when you think Lollie is worn out — her parents try to put her to sleep, making this a bedtime book by definition, but good luck with that (“it’s far from lulling,” writes the Kirkus review)—she “spins the music low,” even when in bed. She doesn’t succumb in sleep either, given that the final spread shows her dreaming in hip-hop.

To call Pinkney’s palette warm and sunny doesn’t quite cut it. This is a book that shines, and that energy is matched by the line: the book is all swirling, spinning lines and nonstop movement and energy. It’s a burst of joy, this one, and just right for the smallest hip-hop fans you know.