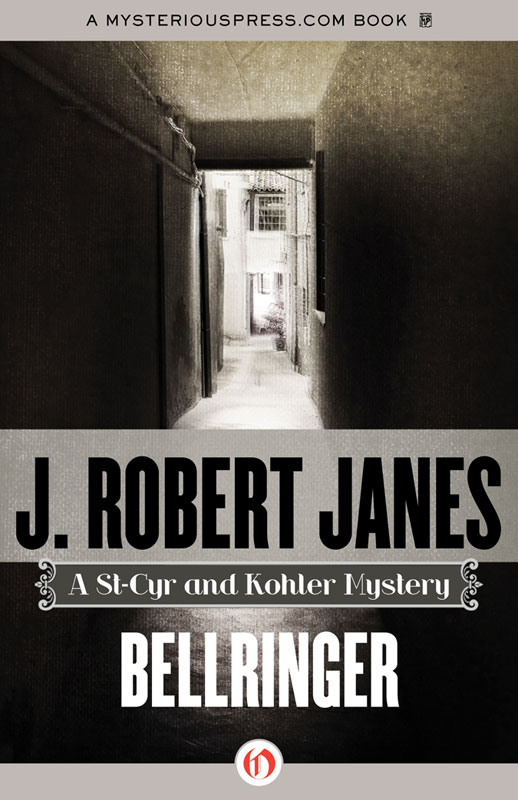 For J. Robert Janes, World War II continues to ravage the face of Europe. Adolf Hitler remains in power in Berlin, still confident of creating a new German Empire. Allied bombers persist in menacing Axis strongholds across the continent. And France, occupied by German military forces since 1940 and with octogenarian Philippe Pétain as its head of state, has become a place of misfortune and desperation, compounding its own sorrows by collaborating with its attackers. For many French citizens, their homeland has become unrecognizable, a foreign country.

Even as they suffer through the great crime of war, though, the French must also endure more quotidian offenses—theft, assault, arson and homicide. And that’s where Janes’ unlikely pair of fictional detectives come in.

But then, after the publication in 2002 of Flykiller, Janes and his series protagonists just seemed to disappear.

Only now, a full decade later, have St-Cyr and Kohler returned in an enthralling, character-propelled new police procedural, Bellringer. The plot finds them probing suspicious deaths at a pair of resort hotels in northeastern France that have been converted into an internment camp for British and American women (and some Senegalese men) who didn’t flee the country before German forces marched in. Sex, séances, stolen mementoes and a 23-year-old mystery surrounding a husband’s demise all figure into the inquiry—one that will put Janes’ sleuths at odds with both the camp’s kommandant and their own Nazi superiors.

I recently asked 77-year-old Janes some questions about Bellringer as well as his series’ past and its still-uncertain future.

Your 12th World War II novel, Flykiller, was published in 2002. But then you dropped off the publishing map. What happened?

After nine books with [UK publisher] Constable, its sales people put thumbs down on the series…Mike Petty at [rival house] Victor Gollancz picked up and published Madrigal and bought Beekeeper, but then Gollancz was sold to Orion and Anthony Cheetham became its owner and my mentor. Then Cheetham sold Orion to Hachette, the big French publisher, and that was the end of me for them…

But I simply kept on writing every day, six days a week and sometimes seven. As a result, there are Carnival and Tapestry still to come, and it’s my sincere hope that [U.S. publisher] Mysterious Press will view them as kindly as it did Bellringer.

Bellringer takes place in the winter of 1943, at a pair of luxury hotels in Vittel, France, that have been turned into an internment camp. Can I assume those hotels actually existed?

Virtually everything used in Bellringer still exists. In addition, I was fortunate to be able to look over architectural diagrams and photos that gave me the past history of Vittel’s Parc Thermal where the camp was. Everyone who writes novels uses the bricks and mortar, if possible, and this is one terrific setting. There have been, as I note in the novel, substantial changes to the Parc Thermal, but it is still very much the grand international spa it was in the belle époque and before that.

What made you want to write this new novel?

Bellringer has a setting and topic which have been with me for well over 40 years. I’ve read widely, of course, and did so long before I ever took up writing full-time. Always someone like me is looking for those odd, out-of-the-usual things, and this was one that simply stayed with me—waiting, I guess, for St-Cyr and Kohler to come along.

Bellringer deals with a forgotten and overlooked piece of history that I felt should not be left that way. How it could have been forgotten is anyone’s guess, given that nearly 1,000 American women and a good 1,600 British were interred, side by side. Who were they, where had they come from, how were they different from one another, how did they keep from being absolutely driven out of their skulls by the lack of privacy, the lack of doing anything useful, the suspension of their careers, loves and lives—all such things? It offered immense potential and as a result I really enjoyed writing it.

The conditions you describe in those hotels are pitiful. Confined together, enduring wartime deprivations, the women became almost like a sorority, swapping gossip and engaging in petty arguments, and finding what fond companionship they could. Did you have a strong idea of what that insular society was like before you began writing, or did it only take full shape as you composed the book?

I knew beforehand what was in essence needed, though as I wrote each section in longhand first, things developed. I did have a very clear idea of what must have gone on. There are things that I could have emphasized a lot more but I chose not to in favor of the mystery. Nora [Arnarson, one of the prisioners], in a sense, has bits and pieces of myself, and when asked by St-Cyr if she had been looking into the mystery of Madame de Vernon’s husband, states, “Wouldn’t you, if you were bored out of your skull in a place like this?” I certainly would have been.

With so many very different women, the story could have gone in innumerable ways, and doubtless some readers will take themselves along those trajectories. But for me it offered, as a setting and topic, phenomenal potential, and I only hope others will find that I’ve lived up to that.

Having read a number of your St-Cyr/Kohler books, it seems to me that what you find most engaging isn’t just the time period and location of these tales, but seeing how war affected people left behind in Occupied France. Is that correct?

That is very correct, but let me add that what went on in German-occupied France during World War II could easily have happened elsewhere. Hence, we have, in a sense, a basic human dilemma and have to ask, How did people manage when even their neighbors could well rat on them or steal what they could?

I’ve eaten squirrels, so perhaps that helps. I also grew up during the Great Depression and that certainly helps, because I still think as we did back then. You simply didn’t ever waste anything, and things found uses that today most folks wouldn’t even consider. And yes, I remain very interested in how individuals managed and reacted. That’s a big part of the whole thing. But I am not, nor ever would be, anti-French because of what went on, and my mysteries clearly bring this out.

It must be tempting to include Nazi higher-ups and other historical figures in your yarns. Yet you’ve been very restrained in doing so, sometimes mentioning them but rarely inviting them onstage. Why?

I’ve used Klaus Barbie in Salamander; Karl Oberg, the Höherer SS und Polizeiführer of France, and his deputy, the Standartenführer Helmut Knochen in Carousel...Flykiller also focuses on Pétain and [his successor, Pierre] Laval, and Madame Pétain...But generally I try to focus on the ordinary, the day-to-day.

You said earlier that the next, as-yet-unsold novel in the St-Cyr/Kohler series is titled Carnival. Can you tell us about that book’s plot?

Carnival takes St-Cyr into what has now, again, become a foreign country to him, namely Alsace. It’s a wonderful story but it does have some very tough situations and things for my protagonists to work through. After writing that one, I took the two back to Paris in Tapestry for what became an outstanding portrayal of that city in February 1943. Five crimes in one night and all of them intertwined and linked.