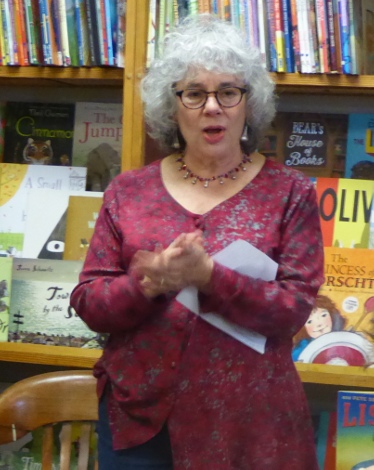 It’s been a good time lately to be a Pete Seeger fan – that is, if you want to read about his life. Young readers were introduced earlier this year to Susanna Reich’s picture book Stand Up and Sing! Pete Seeger, Folk Music, and the Path to Justice, illustrated by Adam Gustavson. And just last year, Anita Silvey brought readers a more detailed biography in Let Your Voice Be Heard: The Life and Times of Pete Seeger, a reverent and engaging introduction to Seeger’s life for middle school audiences.

Like those writers, author Leda Schubert grieved the death of Seeger in 2014 and felt the urge to make her own contribution. Her new picture book, Listen: How Pete Seeger Got America Singing, illustrated by Raúl Colón, is a warm and inviting account of Seeger’s life and activism, what Leda calls below “a song for Pete.” Notes the Kirkus review, “Schubert and Colón capture with affection and respect Seeger’s remarkable lifetime of speaking truth to power through music and engaging the hearts of his audiences.”

I talked with Leda via email about taking on the life of one of her personal heroes.

When I read this, I could hear Pete's voice in my head. Did you know right away you wanted to use this immediate, conversational tone that works so well? Or did it take a while to get there?

Who invented the hot shower?* I owe most of my first lines to that brilliant person. I can research and write and think and suffer, and then one morning—if lucky—the shower gods deliver a sentence. It is that sentence that allows me to stop researching endlessly and begin to write, even if I end up changing it. This happened with Monsieur Marceau, when the shower sent me “Look at this man.” And it happened here, with “Listen. There was nobody like Pete Seeger.” Once I had that voice of authority, I had a voice for the whole book.

Also, Pete was always so completely himself on stage. There was no pretense. So it took me a while to find the right conversational tone, but I knew it when I had it. And thank you!

Did you feel any pressure writing this, given that there have been quite a handful of other excellent children's books of late about Pete? Did you also feel pressure to get it just right, given your long-held admiration for him and his music?

Of course I felt pressure! I always feel pressure. I’m a good neurotic.

I knew about two of the other books, which were a couple of years from publication when I submitted my manuscript, and I originally had no intention of stepping on the toes of these friends. But when I heard Pete had died, I couldn’t stop crying.

Then it turned out that writing was a way for me to process my deep grief. I had to do it. I had to honor him through my own story. The books published so far are quite different from each other, and there's room for more, I hope. Would we have only one book about Martin Luther King Jr., Rosa Parks, Lincoln, etc.?

What was it like for you to see Raúl’s illustrations for the first time?

I don’t exactly cry easily, although it may sound like it here. Too many medications, ha. But I did get very teary. I love the WPA [Works Progress Administration] feeling of some of the double-page spreads; I love the palette Raúl chose; I love the crowd scenes. I love it all. Do I get to say that? I am a very lucky person.

You talk in your author's note about, once upon a time, saying hi to Pete after a festival, yet he didn't reply. (His wife did.) Was he a reticent man with fans? Was he exceedingly shy? (This is hardly central to your story, but I found myself curious about that.)

A long time ago I read an article in Rolling Stone about Pete. He had been interviewed in a café in Berkeley, and of course he sang a song. A young woman dropped a piece of paper on the table on her way out. "I don't want to interrupt your conversation, but I want to thank you because you have brought me pleasure I can't describe since I was a little child. I love you."

I thought of that note when I had the chance to thank him. For decades, people must have tried to tell him what he meant to them. I was one of thousands, but I had to speak and I was glad I did. I loved him too. He was my forever hero.

I do believe he was quite shy. A public person is often very different from the private one.

What was the most challenging part of writing about the life of such a prolific artist and passionate activist?

I find writing in general hard, but in this case, particularly hard because he meant so much to me. As you say, he led a good long life (and I wish he were still here) and did many things, but most of his public life focused on what he could do with his music. So I used that as a framework (this didn’t take great insight!) to tell the story, with the repeated “Listen” as a device.

Shaping any person’s story is a tremendous responsibility, isn’t it? It’s like playing God. What to leave out without being dishonest—thus I knew I had to include HUAC and the blacklist, so central to Pete’s story. Will young children understand? I hope so. What else to include? How to create a story arc, a reason to turn the pages? How to speak to the heart of the reader?

I left out most of his family—his parents, his siblings, and his children. I said little about Toshi [his wife], without whom Pete would not have been Pete. I left out most dates (and included a timeline). I chose to tell the story as a tribute, a song for Pete.

What's next for you? Working on any books now you're allowed to talk about?

*Maybe William Feetham, the inventor of the mechanical shower, ha.

Next year will see Trailblazer: The Story of Raven Wilkinson, published by little bee books and illustrated by Theodore Taylor III. And I live in hope that I will come up with something great featuring the Giant Puppy, my badly-behaved and over-enthusiastic dog. Other things are lurking on the laptop.