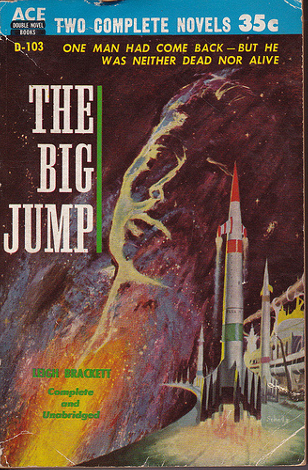 Before we step off this week, I have an announcement for any readers in the Burlington, Vermont area: I'll be presenting a paper for the upcoming 75 Years of Science Fiction conference on April 27th at UVM. The paper will be on the evolutionary roots of the genre, and draws heavily upon this column!

In the Golden Age of science fiction, male authors far outnumbered their female counterparts. C.L. Moore was a notable break from the largely male-dominated field, but she wasn’t the only one to put fantastic tales to paper. Another notable author of the day was Leigh Brackett, who had begun writing during the early days of the Golden Age of SF before gaining prominence as a novelist and screenwriter in Hollywood, with several notable films to her credit: The Long Goodbye, The Big Sleep and Star Wars: The Empire Strikes Back.

Brackett was born on December 7th, 1915 in Los Angeles, California to a family of declining fortune. Her early life was met with hardship early on in 1918 when her father passed away, one of the many casualties of the global flu epidemic. After that, her family moved quite a bit, and Brackett later recalled that she had a haphazard education as they travelled the country before settling down. Her love of science fiction came when she was 8 years old, after picking up a copy of Edgar Rice Burrough's second Barsoom novel, The Gods of Mars. She later said that she knew from that point what she wanted to do: "I was never the same after that. Suddenly, I became aware of other world out there and then, from that time on, I was destined to be a science fiction writer."

Headstrong and described as a tomboy, Leigh Brackett was a rebellious daughter. Her mother, who never remarried, was a polar opposite of her daughter: Described as a slight, beautiful woman, her daughter was athletic, tall and constantly at odds with her mother. Brackett was educated at an all-girl's private school in Santa Monica, where, at the age of 13, she had begun to write seriously. Through her school, she was introduced to the theater world, where her love of writing was reinforced by her successes with plays. While she was offered a scholarship, she never continued on to college, unable to afford the remainder of the cost. In its place, she opted for a career in writing.

Brackett remained close to science fiction. In 1939, she joined the Los Angeles Science Fiction Society, where she met other science fiction authors who were just breaking into the field, such as Ray Bradbury and Robert Heinlein, who would remain close personal friends for years to come. As she became more involved with the science fiction community, she began writing short stories for submission to the magazines from which she received her early doses of science fiction— Argosy and Adventure—only to earn a number of rejections. It wasn't until she met fellow authors Henry Kuttner (and later, C.L. Moore), who offered advice and valuable connections within the field, that Brackett's career as a writer began. Her work was heavily influenced by the planetary romances of her childhood, and she wrote numerous space opera adventures. In 1940, she sold her first two stories, “Martian Quest” and “The Treasure of Ptakuth,”  to John W. Campbell Jr.'s Astounding Magazine. Her luck with Campbell didn't last, with her sale of “The Sorcerer of Rhiannon” to the market in 1942. Brackett's first love was the planetary romances, and Campbell simply wasn't interested. Noting that a story to Astounding had trouble finding a home elsewhere, she started looking for other homes for her work. She found that magazines such as Planet Stories,

Startling Stories, Thrilling Wonder Stories, Super Science Stories and others would be happy to publish her adventures throughout the 1940s.

Her mother and relatives weren’t supportive of her interest in science fiction, or her writing in the genre. An aunt once asked her: “Why don’t you write nice stories for the Ladies’ Home Journal?”, to which Brackett replied: “I wish I could, because they pay very well, but I can’t read the Ladies’ Home Journal, and I’m sure I couldn’t write for it.”

While she was beginning to find some successes in the science fiction markets, Brackett found that she had to find other sources of income, and began to write detective stories. Her first sale was in 1942, a short story called “Murder in the Family,”to Mammoth Detective, followed by a number of other sales in the market. While science fiction authors had trouble through the next decade trying to publish outside of the magazine market, mystery authors had no such barriers, and the hardcover book was in Brackett's future. Her first novel, No Good From a Corpse was first published in 1944, where it attracted the attention of Hollywood director and producer Howard Hawks. A friend at a bookstore knew that Hawks would continually search for new material, frequently buying stacks of mystery novels, and added her book to the pile. Intrigued by her story, Hawks hired Brackett to write the screenplay for an adaptation of Raymond Chandler’s novel, The Big Sleep, which she co-wrote with William Faulkner.

Working in Hollywood was more lucrative than writing for the SF magazine market, and she would continue to work with Hawks over the next couple of years, largely taking a break from science fiction. Having written a novella for Planet Stories in 1946, Lorelei of the Red Mist, she asked for help from fellow author Ray Bradbury, who completed the story, and it was published jointly. In the same year, Brackett married fellow science fiction author Edmond Hamilton, with Bradbury as their best man at the ceremony. Unlike their friends C.L. Moore and Henry Kuttner, whose work was indistinguishable following their marriage, Brackett noted that the pair didn’t collaborate well together. Brackett frequently wrote screenplays and short fiction, while Hamilton eventually found work with DC comics and short fiction.

Brackett’s hiatus from science fiction only lasted a couple of years before she returned, writing a series of novels throughout the 1950s: The Star Men, Alpha Centauri or Die!, The Big Jump and possibly her best known novel, The Long Tomorrow. In addition to science fiction, she continued to write detective and western stories, alongside several other screenplays, for films such as Rio Bravo, Hatari, El Dorado, Rio Lobo and The Long Goodbye.

Brackett’s final movie screenplay was a mix of her entire background, between epic space opera and cinema: Star Wars: The Empire Strikes Back. Hired by the first film’s director, George Lucas, the move seemed to be a perfect fit: Brackett and her late husband (Hamilton had passed away in 1977) had written extensively in the space opera subgenre, upon which Star Wars had been heavily influenced. Brackett, delighted by the invitation, was responsible for the first draft of the screenplay, completing it in 1978, shortly before she died of cancer, never to see her final work on the big screen.

Brackett was a rare hybrid of types in the writing world: While some authors had toiled away for the pulp and magazine markets throughout the 1950s, she found that success in a wider range of fields, dipping into screenwriting and mystery novels, producing several exceptionally well-known works. Her love for science fiction, however, was something that remained close at heart, and she noted in interviews that she appreciated the science fiction fan environment, having made a large number of close friends in the California circles: “Everybody in the field welcomed me with open arms. All the other writers and editors and everybody were just great because we were such a small clubby group in those days that if you found another nutcase that you could talk to, it was great.”

Close friends with other women in the science fiction field, most notably Catherine Moore, Brackett was an early trailblazer for women in the genre. After learning the ropes, she recalled little opposition to her writing, with a single instance of pulling her stories out of a market due to sexism, in Campbell’s Astounding, and moved on to other markets where she left a long lasting impact in the genre, both in print and on the silver screen.