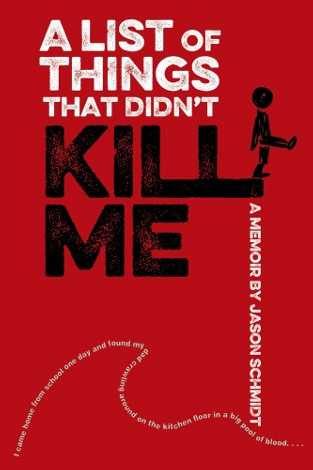 Talky Talk: The Way We Were

I actually love this cover—the macabre simplicity is well-suited to the really dark subject material, and the way the typography forms the water and diving board/pier is really clever. Its resigned, macabre almost-cuteness is perfectly appropriate for the book.

This is a memoir, and the title could not be more appropriate. Jason Schmidt’s childhood was dark, y’all. His dad was a flighty drug-addled (sometimes drug-dealing) “free spirit” who never wanted to be weighed down with a “straight,” normal life. His us-against-them mentality led to little Jason being taught to distrust everyone “straight,” and live a life alternatively taking care of his father and running scared from his dad’s wrath.

The book opens with Jason’s memory of coming home to his father crawling around the kitchen, in a pool of his own blood, and having to call a cab to the hospital because he knew an ambulance would be too expensive. Torn between a duty to help and a certain wish that his father would just die already, high school–aged Jason was back on the clock.

It never really gets more cheerful, but gallows humor permeates throughout.

Jeez, the poor author—it would be bad enough if this were a character, but he actually lived through all of this. Although Schmidt never appears to feel sorry for himself, he went through the wringer. You can’t help but hope his life is now full of rainbows, unicorns and the softest, fluffiest, glitteriest clouds. Some people in his life seemed to sense that not all was well, and did their part to help him, but as a relatively healthy and empathetic adult, I just wanted to kidnap this poor kid and rescue him from some pretty miserable circumstances.

The only thing tingling will be your spidey-sense, telling you (and Little Jason) to run.

Talky Talk: The Way We Were

Are you depressed? Are you running for the hills? Well, here’s the part where I can tell you that despite the horrible incidences in the memoir, Schmidt’s prose is utterly compelling. There is absolutely no reason that I should have wanted to read hundreds of pages about everything from borderline sexual abuse to accidental animal abuse to a ne’er-do-well dad with a horrific temper…but somehow, Schmidt made it work. His writing never ventures into the maudlin. You have to hand it to Schmidt: He really turned a horrible childhood into a fascinating memoir.

This book contains just about every trigger warning you can think of, particularly if you’ve had a bad childhood yourself. The bright side is, of course, that Jason Schmidt made it through and is living a better life now—which would be comforting to anyone experiencing that same horror show.

With that said, this is a book for an older teen. It was hard to read as an adult working in criminal law, let alone someone who should be young enough to be idealistic. And that, of course, is the whole point—some people don’t get that choice.

Book, you were crazy in several kinds of ways. I just wanted to hug your characters and make it all better. If you ever need a friend, you can call me, but I’m guessing that we won’t be walking down the aisle.

Jennie is the leader of the San Francisco FYA book club and an old-school member of the L.J. Smith fandom. When she's not reading or talking about reading, she cooks obsessively, runs an Etsy shop, thrifts for vintage everything, and practices law.