In Love in War 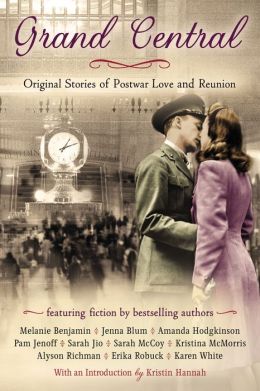 I sometimes think that some women (maybe people?) are kind of hard-wired to like romance. I can’t ever remember a time when I wasn’t interested in love stories, and I read my first romance novel when I was 12.

But one of the first romantic stories I ever remember reading was a short story called “Appointment With Love”* by S.I. Kishor. I believe I was 10 or 11 and my family was on a long, hot cross-country drive. I don’t exactly remember the details, but I know we stopped at a book sale somewhere and I picked up a Reader’s Digest collection of stories titled Moments of Decision. To this day, over 30 years later, I can remember a handful of those stories, but that one I remember best. I can even remember the first line:

“Six minutes to six read the great round clock over the information booth at Grand Central Station.”

As you can tell, it has stuck with me, and to this day, I remember the rush of emotion I felt the first time I read it. Yes, I love romance. But this was romance combined with books and letters—and the bittersweet backdrop of war. Of World War II.

World War II was such a brutal and cataclysmic time in history, but it was also terribly romantic, and fascinating—to me at least. (And since we commemorate D-Day on June 6, this seems like a good time to talk about it.)

I was shocked to recently discover a collection of short stories that came out last year commemorating the 100th anniversary of Grand Central Station—shocked because somehow I had missed it!—which featured short stories written by 10 bestselling authors known for their WWII-set historical fiction.

It’s called Grand Central: Original Stories of Postwar Love and Reunion and the stellar roster of authors comprises names like Sarah Jio, Melanie Benjamin, Pam Jenoff, Jenna Blum and Karen White. The moving introduction is by Kristin Hanna, and I love these lines: “While the world was at war and the men were gone, it was the women who held life together, who gave the men a safe place to return to. Many of the stories herein are focused on women and their lives on a single day in 1945, when the war was over but far from forgotten.”

I’m not quite halfway through the book, and I’m really enjoying it. I would recommend it to anyone who loves wartime fiction. The concept is clever—a collection of loosely connected stories that take p

lace on a particular day in New York’s Grand Central Station. The snapshots of men and women readjusting to their lives just after the war are poignant, and the real and metaphoric journeys they are taking are fascinating. I love the fact that not all the stories are about returning soldiers; we see Holocaust survivors and refugees and we’re reminded that even returning heroes were not always good men. The stories also highlight the huge spectrum of challenges women face during all wars, and some distinct issues they faced during this one.

However, if you need resolution or only want happy endings, this collection may not be for you. The storylines weave lightly together, and you do get occasional glimpses of some of the characters in subsequent stories. But, perhaps appropriately, given the fact that the backdrop of the stories is a war that displaced and destroyed millions of lives, there is an overall hint of uncertainty. Many of the stories leave us wondering, but vaguely hopeful—they’ve survived the war, after all. We want them to be happy, if that’s possible.

If you’re not a short story fan, but you’d love to read some World War II novel-length fiction, I definitely recommend you explore those authors’novels. Here are some other (non-romance) suggestions:

The Nightingale. Kristin Hannah’s recent release shines a light on the traumatic Nazi occupation of France through the experience of two very different sisters.

All the Light We Cannot See. This beautiful, haunting novel won this year’s Pulitzer Prize for author Anthony Doerr.

Code Name Verity. Elizabeth Wein’s brilliant, bittersweet young adult novel is a compelling reminder of the courage of youth and the devastating cost of war.

The Shell Seekers. This epic novel by Rosamunde Pilcher was re-released in trade paperback last month. I read it over 20 years ago and still remember it.

Silver Rose. I don’t even remember when I read this book by David Kaufelt—maybe as far back as high school; it was released in 1982 and looks to be out of print. But if you ever come across it, pick it up. Another tragic war romance that has stayed with me through decades.

His Very Own Girl by Carrie Lofty. I love this writ

er, so a WWII-set novel is definitely on my TBR pile

Morning Glory by LaVyrle Spencer. A classic by a legendary author that spans before, during and after the war

A Distant Melody by Sarah Sundin. The start of a well-regarded series by an author known almost solely for her WWII-set romances

Shining Through by Susan Isaacs. I’m told the book is better than the movie.

(If you’re interested, I also wrote a piece in 2013 for NPR with a focus on other WWII romances. You can read it here.)

So do you love World War II fiction and/or romance? What are some of your favorites?

*“Appointment With Love” was originally published in a 1943 issue of Collier's magazine, but also appeared without attribution and slightly altered in a 1992 Max Lucado book, then with appropriate credit in the 1996 collection A 3rd Serving of Chicken Soup for the Soul and Stories for the Heart. I got this information from Snopes, so I guess they don’t know about the Reader’s Digest anthology.