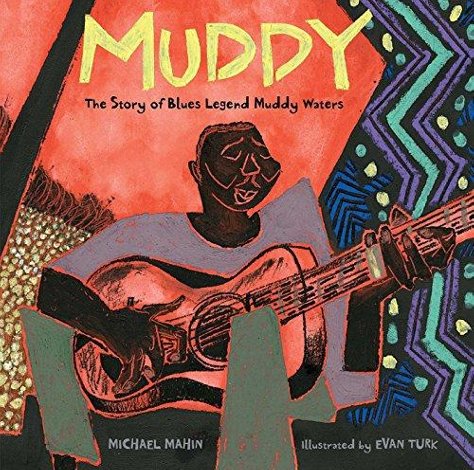 I love to see well-crafted picture book biographies of musicians. Some of my favorite picture books ever fall into this category—Chris Raschka’s Charlie Parker Played Be Bop; Andrea Davis Pinkney’s Duke Ellington: The Piano Prince and His Orchestra, illustrated by Brian Pinkney; Gary Golio’s Jimi Sounds Like a Rainbow,illustrated by Javaka Steptoe; and Spirit Seeker: John Coltrane’s Musical Journey, also by Golio but illustrated by Rudy Gutierrez. Those right there are some good books, tikatikatikatika poom poom. (Those are my drum sounds, but let’s carry on.)

I’m sure it’s a challenge to find just the right illustrators for such manuscripts, ones who can capture the style and spirit of the biography’s subject—illustrators, that is, who can put so much music to paper. To put it another way: I would think it’d be really easy to screw up.

If you’d ever asked me (which you wouldn’t have done, because I don’t work in publishing) which illustrator I’d pair with a picture book manuscript about the life of legendary musician Muddy Waters, my brain would not have immediately gone to Evan Turk. To say Evan is talented is the understatement of the day, because he is immensely so. He’s relatively new to making picture books, and I’ve been watching his work with interest. (Want to see my 2016 interview with him so that you can see lots and lots of his art and read about his detailed research? Head here.) But a book about Muddy Waters? My thoughts wouldn’t have necessarily gone to Evan.

But I’m glad that is not the case for whoever edited and art-directed Michael Mahin’s Muddy: The Story of Blues Legend Muddy Waters, released earlier this month. Because Evan did illustrate it, and it’s bold and impressive.

The book starts with Waters’ childhood in the Mississippi Delta. Born McKinley Morganfield, he loved playing in the mud and so acquired the nickname “Muddy.” His mother was out of the picture when he was just a boy. Mahin, mind you, doesn’t drily lay out these facts; he writes as if they are a blues song in and of themselves: “McKinley’s mamma gave him a life. And a laugh. And then she was gone. Forever. Oh, child. Long gone. Oh, child. Sail on.”

Grandma Della took him in, exposing him to the music of the church choir. But the music he really liked, Mahin notes, was the music “they didn’t play on Sundays.” Muddy was drawn to what Mahin describes as …

“… fish-fry music. It was shake off the dust and wring out your worries and laugh and

cry and feel alive music. It was the blues, and Muddy couldn’t get enough of it.”

Though Grandma Della told him he shouldn’t waste his time with music, he persisted. A repeating refrain in the book captures the notion that Muddy was never good at doing what he was told, Mahin suggesting this is what led to his astounding success as a musician. So, he did his own thing—practicing on guitar when not working in the fields as a sharecropper, heading to Chicago to try the music scene, struggling to maintain his own sound in the bebop and jazz-soaked town, and persevering, even when his first recording failed to include his own name and instead was billed as being by “James ‘Sweet Lucy’ Carter.” Muddy didn’t give up. “One day,” as Mahin notes at the book’s close, “the whole world would know the name Muddy Waters. One day was on its way.” As you can see, Mahin stops the story just before Muddy’s massive, world-wide success.

There’s a distinct rhythm to Mahin’s writing. In describing Muddy’s arrival to the Chicago music scene, he writes: “It was a deep-feeling, gutbucket, gut-aching music full of life and love and trouble and pride. … Whoa, yeah. Whoa, yeah. Sail on. Sail on.” These lyrics (the ones in italics), to be clear, are invented. There is also a small-print note on the copyright page, stating that the dialogue in the book is also “the work of the author.”

Evan fills every inch of these expressionistic spreads with color and movement, a lot of eye-popping diagonal lines and even some newspaper clippings. Yet things never get too busy, and Muddy is always the focus. He is imbued with shades of deep-earth red, as if to remind readers of the mud he played with as a child – and to remind us of his Mississippi Delta home. Evan’s use of purple is especially striking. Grandma Della is always seen in a dark purple dress—the moment he leaves her to head to Chicago is moving in its tenderness, Grandma Della appearing small, as if a child being abandoned—and in later spreads, we see Muddy with purple contours in his face and purple outlines on his fingers as he plays in clubs. Grandma Della is always with him, after all.

It’s remarkable to see Evan’s portrait of Muddy, when you stop to think about the fact that it’s not terrifically detailed: It’s the shape of a head with around ten lines to delineate facial features. That’s about all. But it’s 100% Muddy.

It’s the celebration of a singular musician, as well as the notion of overcoming adversity. Triumphant, dynamic, vibrant: This one is a feast for the eyes – and not to be missed.