The Many Names of Catherine Lucille Moore 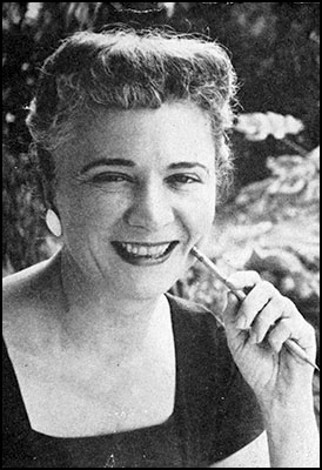 Male authors, editors and readers dominated the early days of science fiction. Over the course of this column, we've talked about notable figures such as Jules Verne, H.G. Wells, E.E. 'Doc' Smith, Hugo Gernsback and others, each of whom was influential to the genre with their works. The patriarchy that appears, however, is not absolute: our very first column focused on Mary Shelley, and by the time that the pulp era began, female authors were beginning to appear in the monthly SF publications that hit newsstands. Amongst these authors was Catherine Lucille Moore, who wrote under the name C.L. Moore (and others) over the course of her career.

Moore was born on January 24th, 1911 in Indianapolis, Indiana, where she was "reared on a diet of Greek mythology, Oz books and Edgar Rice Burroughs," early training, she noted, for a career as a writer. Frequently ill as a child, Moore found herself in and out of school, pushing her towards books as a means to keep entertained. After recovering as a teenager, she enrolled at Indiana University in 1929.

While there, she wrote for the University's student-run magazine, The Vagabond (the three stories at that link have previously been unknown to SF and Moore fans, uncovered with help from assistant archivist Carrie Schwier and intern Cynthia Lynn of Indiana University archives). Her three stories, Happily Ever After (November 1930), Semira (March 1931), and Two Fantasies (April 1931) demonstrated a real skill as an author, which was noted in the March issue's contributor remarks: "Catherine Moore returns to the Vagabond with a charming story after the manner of Lord Dunsany. Miss Moore is, perhaps, the most promising prose writer who has been at Indiana in some time."

However, as the Great Depression settled into the United States, Moore left the university and began work as a secretary at a bank in Indianapolis a year and a half after enrolling. She continued to write, staying after hours at the bank in the bank’s balcony “where she could look out over the bank’s main floor,” submitting stories to various fanzines. The back of one of her later novels noted that she enjoyed writing where she had a good view.

Moore's first professional sale in 1933 made the biggest splash: Farnsworth Wright, editor for Weird Tales magazine received her story, Shamebleau, and immediately knew that he had something fantastic.  Reportedly, Wright closed Weird Tale’s offices for the day in celebration upon reading the story, which appeared in the magazine’s November issue, under the name C.L. Moore. While other women writing in the science fiction field at the time masked their names to compete in a male-dominated field, Moore claimed that the abbreviation of her name was more to protect her identity from her employer.

Moore continued the adventures of the story's central character, Northwest Smith, with Black Thirst, published in Weird Tales' April 1934 issue and with Scarlet Dream in May and Dust of Gods in August. The Black God's Kiss, appearing in the October 1934 issue of Weird Tales, featured a new character, Jirel of Joiry, a notable female protagonist in a sword and sorcery story.

Weird Tales readers praised Moore’s characters, prose and storylines, including fellow author H.P. Lovecraft. Others in the industry took notice, including F. Orlin Tremaine, the editor of Astounding Science Fiction, bringing Moore into the science fiction fold with her story The Bright Illusion in the October 1934 issue. She would continue to publish in the magazine market throughout the rest of the 1930s as C.L. Moore.

Another fellow author and admirer of Moore's work was Henry Kuttner, who had published his first story in 1936 in Weird Tales, Graveyard Rat. Kuttner wrote to Moore, unaware that she was a woman.   In 1940, the pair married, marking a major change in their writing careers. Moore all but ceased to write under her own name as they collaborated extensively; their contributions to their stories are inseparable. They published under a series of collaborative pseudonyms: C. H. Liddell, Lewis Padgett and Lawrence O’Donnell. Many have noted that the two worked extremely well together: one would leave the typewriter for a moment, only to find the other take their place, finish their sentence and continue onwards. Between the pair, neither could account for which wrote which parts of their numerous stories.

While both Moore and Kuttner collaborated, their pseudonyms often strayed towards one or the other:  the stories by Lawrence O’Donnell stories are believed to have taken more from Moore’s efforts while the Lewis Padgett stories likely favored Kuttner’s writing. By the 1940s, the couple were part of the regular rotation for John W. Campbell’s Astounding Science Fiction, but Moore continued to publish a number of stories under her own name, such as There Shall Be Darkness (February 1942), No Woman Born (C.L. Moore, December 1944), and more. Other stories, such as Clash by Night (March 1943), were jointly written by the two.

One of their more notable works, Vintage Season, appeared in Astounding Science Fiction in September 1946, under the O’Donnell name. Readers and authors alike hailed the story, and in 1973, it was one of the stories selected for the second volume of the Science Fiction Hall of Fame. In 1950, the pair relocated to a hilltop house in Santa Monica, California where they studied at the University of Southern California, eventually graduating in 1956, while they continued to write, branching into mystery novels.

Kuttner died of a heart attack in 1958, shortly before he was to appear as the Guest of Honor for the Los Angeles WorldCon  in 1958, and following his death, Moore never returned to writing science fiction, writing scripts for television shows instead – notably Sugarfoot, Maverick and 77 Sunset Strip, while teaching writing at USC. In 1963, she remarried Thomas Reggie, when she stopped writing entirely.

However, Moore remained active within the science fiction community, receiving a number of awards and honors following her retirement. In 1973, she was honored by the Los Angeles Science Fiction Society with a Forry Award for lifetime achievement, and a Count Dracula Society Award for literature in 1977. At the 39th World Science Fiction Convention, DenverCon Two in 1981, Moore was honored as the convention’s Guest of Honor and was the final recipient of the Gandalf Grandmaster Award, sponsored by the Swordsmen and Sorcerers' Guild of America. A couple of months later, at the 1981 World Fantasy Convention in Berkley, California, she was awarded the World Fantasy Lifetime Achievement Award for her work.

By the early 1980s, Moore had begun to suffer from the early stages of Alzheimer’s Disease, and eventually passed away on April 4th, 1987. Since her death, Moore has been honored twice for her contributions to the field: in 1998, she was inducted into the Science Fiction Hall of Fame, and in 2004, the Cordwainer Smith Rediscovery award, in conjunction with Kuttner.

There’s not much out on Moore’s life, but it’s clear that her contributions to the field are instrumental in the formation of the modern face of science fiction. As one of the single female authors in the field during the 1930s, she brought a unique voice and high quality prose to the SF magazine market that earned her much well deserved fame for the rest of her life.

Andrew Liptak is a freelance writer and historian from Vermont. He can be found online at his site and on Twitter@andrewliptak.