Members Only: The Rise of the Science Fiction Book Club 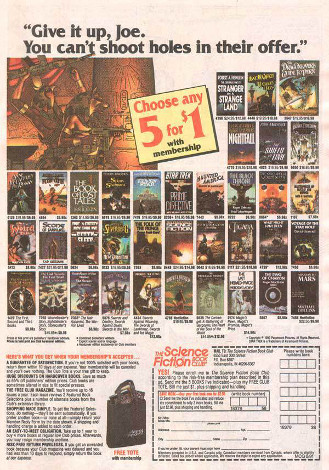 For as long as science fiction has been around, it has been at the forefront of publishing technology and changing sales channels. Readers could pick up sci-fi titles from dedicated genre publishers, as paperback novels, or from newly-formed chain bookstores. In addition to these outlets, there was another way to get your books: through the Science Fiction Book Club.

Serialized subscriptions are becoming incredibly popular, especially in the geek world: just look at the successes of companies such as Loot Crate, which packages up a bunch of geeky items and sends it out to customers each month. Buying books as a serialized purchase isn’t anything new; this type of purchasing was the heart of the Book of the Month Club.

In 1916, a copywriter named Harry Scherman and his partners had begun selling books through their company Little Leather Library, and in 1926, the partners formed a new mail order company: the Book of the Month Club. Where their first company focused on selling the classics, their new one would cut through the sheer number of books and sell a narrow selection: Solveig C. Robinson notes in his history The Book in Society: An Introduction to Print Culture, “New books were risky: how could readers know that they would like them and, more importantly, be impelled to buy more? Scherman’s solution was to market not particular books, but the ‘book habit’. Subscribers to his new venture would receive a regular infusion of new reading materials, selected by experts that would keep them on a steady diet of solid and pleasurable fare.”

Furthermore, the company locked subscribers in: they would automatically send their readers the books each month, placing the option to return the book to the subscriber. “Scherman rightly counted on psychology and laziness to ensure that most subscribers would simply accept and pay for the books that were sent to them.” Robinson noted, “If the handsome hardcover volumes began to accumulate unread on the shelves, so be it.”

The model was a successful one. The Book of the Month Club quickly grew to just under 100,000 in the first two years, and in its first decade, rose to 500,000. In a retail world where dedicated bookstores weren’t commonplace, they accounted for the sale of nearly 20 million volumes in their first four decades of operation.

The success of the Book of the Month Club prompted imitators, and in 1953, Doubleday launched its own dedicated version, the Science Fiction Book Club, along with other clubs for mystery, military, and other genres. The club offered a single book each month, following the same business model: readers would automatically receive that month’s selection, and return it if they didn’t want it. The club’s first offering was Isaac Asimov’s The Currents of Space, and books from the likes of Clifford D. Simak, C.M. Kornsbluth, and Kurt Vonnegut Jr. were offered during that first year. By 1969, the service added additional options, allowing readers to specifically purchase other novels aside from that month’s pick. The Science Fiction Encyclopedia noted that the club was a “major force in sf publishing,” and that it helped to provide fans with a solid selection of novels.

In 1973, Ellen Asher joined the company as their editor. She had begun reading genre fiction as a girl when she “stumbled by chance over a copy of [A.E. van Vogt’s] Slan.” She read widely as a child, borrowing books from her local branch of the New York Public and High School Libraries. After college, she had joined the Peace Corps and taught English in Thailand for two years, and returned home to attend graduate school. When that didn’t work out, she worked for Fawcett Books, and then moved on to the New American Library as their assistant editor, where she edited school and college books. When the editor of the publisher’s science fiction list left, she was assigned to cover that: “I was someone who read the stuff and didn’t actually have two heads.” She was eventually laid off, and found her way to the Science Fiction Book Club, where she would remain for over three decades.

Her role as editor wasn’t to edit the novels, but to purchase the backlist for their subscribers, and often, to research who had the rights to publish the book. “Technically, I picked up the phone and negotiated a deal with whoever had submitted the book—normally someone in the publisher’s subsidiary rights department.” She noted that the primary criteria for purchasing a book was “can we sell this book to our membership?”

Her readers were dedicated genre fans, and would often make requests for books that they would want. Asher noted that they often bought books that they liked, but “took those [reader] requests very seriously.” They were also able to experiment: because of the size of the club, they “could take a chance on a book whose sales potential wasn’t obvious, and some of those did gratifyingly well.”

The Science Fiction Book Club would mail their list a book every couple of weeks, which included a magazine and fliers that trumpeted the club’s offerings. By the 1970s, the club mailed two selections to members. Predominantly, the offerings were science fiction, but eventually, she began to acquire more fantasy novels.

After acquiring a novel, the novel would go to the editorial department, where a copyeditor would look the manuscript over. At times, a new book jacket would be required, and their creative department would put one together before the company printed their own editions. Frequently, they would assemble several books together from an author into an omnibus. All of this had to be accomplished before a hard mailing deadline—otherwise, they ran the risk of members complaining or cancelling their subscriptions.

Asher rose through the ranks from editor to senior editor, and eventually, editor in chief of the company. In 1986, Germany corporation Bertelsmann A.G. purchased the Bantam Doubleday Dell publishing group and their holdings, which included the Science Fiction Book Club.

Andrew Wheeler joined the club in 1991 as a first reader, who would evaluate the books under consideration for the club. “We selected books in a system that was

somewhat similar to everyone else: we got submissions, kept track of them, sent them out to first readers, and then looked at the reports from the first readers to decide what the editors (Ellen and I, primarily) would read ourselves.” He noted that there was a hard-and-fast rule: they had to ensure that at least one of the selections was firmly science fiction, but branched out with the other choice. The SFBC’s office was often in the middle of a debate about what was science fiction, but they often returned to their subscriber base for what their expectations were.

Wheeler also noted that the presence of the club wasn’t always welcome: some readers felt that it ‘stole’ sales away from the first-run hardcovers. He dismissed this, noting that the “SFBC members seemed to be more like paperback buyers, who would wait for the books to be available more cheaply.” This seemed to form much of the motivation of their subscriber base: the club allowed for frequent readers to buy a large number of books cheaper than full price, something that was enormously effected with the rise of online retail giants such as Amazon.com.

In 2000, Bertelsmann and Time Warner merged their direct book sales outlets, forming BookSpan, and the Science Fiction Book Club was joined to its former rival, the Book of the Month Club. Seven years later, further organizational consolidation prompted Asher to take an early retirement, while Wheeler found himself laid off. The Science Fiction Book Club remains in operation to this day, offering a wide range of science fiction titles to readers.