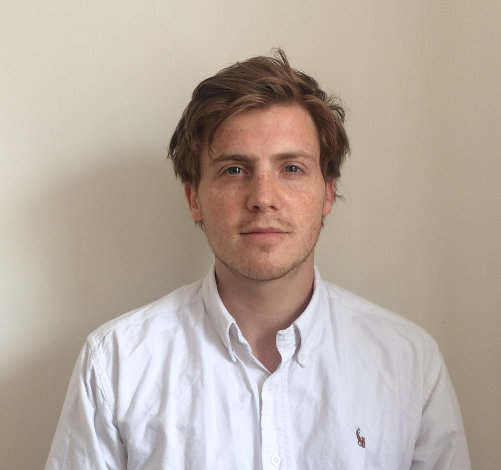 Debut author-illustrator Joe Todd-Stanton, who lives in the UK, brings readers the first in a new series called Brownstone’s Mythical Collection. Arthur and the Golden Rope—complete with a daring young protagonist; a monstrous, hand-chomping wolf; and “artefacts of great power and rarity”—is based on Norse mythology. This first volume of the series opens with a Professor Brownstone, welcoming readers into the family vault. It’s Brownstone who tells the story of “the unlikeliest of heroes,” a young boy in a village in Iceland who must defeat a mammoth and magical wolf. It’s a detailed and fast-paced 56-page picture book – and tells an epic and entertaining story, especially fetching for fans of fantasy and mythology.

I asked Joe via email about the book’s path to publication, those glorious endpapers, and what’s next for Professor Brownstone.

Jules: Did this, your debut children's book, originally release in the UK first?

Joe Todd-Stanton: Yes, a nerve-racking but amazingly rewarding experience! It had been in production for a long time, so finally being able to share the biggest project I had ever worked on was such a satisfying feeling. It released in the UK in September of last year. It's going to be an interesting experience getting this second wave of reviews in America when it's released alongside my other book this year, The Secret of Black Rock.

Jules: What made you want to make a children's book?

Joe: Well, my main dream has always been to illustrate other people’s children's books. I'm quite dyslexic, so I never envisioned myself actually writing anything. But when I was contacted by Flying Eye, I couldn’t pass up the opportunity. Luckily, the people that work there are so invested in making the books as good as possible that it felt like more of a collaborative process. This meant it was way less daunting than I expected, and I learned so much. Now I can really imagine myself going on to write and illustrate more books. (Fingers crossed.)

Jules: Your Tumblr site notes it was to be released earlier, but you did some re-writes. Can you talk about that?

Joe: Basically, there is a whole other version of Brownstone that I made with Flying Eye that was never released. After some careful consideration on both ends, we decided that there were quite a few problems with it and we should go back to the drawing board. After some talks, we both still really loved the idea, so we decided to have another run at it. I think it worked out really well, because we got a chance to salvage all the parts that had worked and harshly edit the rest. I think another big factor was that Flying Eye originally approached me straight out of university, so in the time it took to make the first version I had learned so much by being a commercial illustrator for a few years – and it was great to take that knowledge into the second version.

Jules: How precisely do you think your work in editorial illustrations influences your children's books?

Joe: Editorials for magazines and children's educational books are still my day-to-day illustration work. I think they are a very positive influence on my children's books, because they are like visual puzzles and you learn something about your practice every time you do one. I would use the analogy that it helps you in the same way doing a lot of crosswords would help you with your vocabulary. I also think they help you exercise the number one rule in visual storytelling: "Show don't tell." A lot of the time you express a lot of heavy information with symbolism or emotion, which is a great skill to transfer to children's books.

Jules: Can you talk about this book's origins and first wanting to tell a story based on Norse mythology?

Joe: Well, it started purely out of the idea of the Professor Brownstone character. I wanted to make a book with an interesting narrator who could lead you into crazy adventures. I think this came from loving how much Watson's personality added so much to the Sherlock Holmes stories. Also, I guess you could draw comparisons with kids’ shows, like Mr Benn, where you have a narrator with a collection of things that tells a story.

The idea to explore Norse mythology came much later, purely through endlessly looking online and in books for mythical items and their back stories. When I stumbled on the tale of Fenrir and the golden rope, it just instantly grabbed my attention – and I could see how well it could still translate to kids now. The original Norse telling of the story is pretty much exactly the same, except that it's Thor's son, Tyr, who sacrifices his hand to stop Fenrir. (I didn't think Arthur deserved the same fate.)

Jules: The starred Kirkus review notes: "With picture books seeming to hew to ever more minimalist approaches, this retelling of a Norse myth, rich with adventure and mystery in a wonderfully picturesque package, comes as an opulent treat." Is this opulence something that you strove for, or did the story intrinsically call for it?

Joe: Well, a lot of the art of Norse mythology is very detailed, but I also naturally drift towards that in my work. So I think it was the perfect mix. The books I loved best when I was a kid were always very detailed, so I probably pick narratives that will lend themselves to that style. Pretty much every mythology is so rich in back story and characters that it's a great thing to hang a story around, because it gives you an instant, vast visual language you can then place your character into. Another reason is that I love images that draw you in through the use of layering. If I have a chance to frame an image with something or add another layer of detail, I will always do it.

Jules: Were those endpapers as fun to draw as they look?

Joe: Yes! That was probably my favorite spread to make, as it was just pure and simple, stress-free drawing. When I'm thinking of an idea or on the phone to someone, I have a habit of doodling things, like star maps and my own made-up mythical symbolism, which is probably due to reading too much Tolkien as a kid. It was great fun to get that all out of my system, once and for all.

Jules: What's next for you? More children's books? More stories in the Brownstone Mythical Collection?

Joe: I have a new book coming out in March, which I am really proud of, called The Secret of Black Rock. The story is about a little girl who makes a discovery that changes her view of the natural world and how we should try and protect it. I can't wait to see how it's received, especially in a time in which the natural world should really be at the top of the agenda.

I am also starting work on the second Brownstone book, which should be getting a release later this year. It's going to be called Marcy and the Riddle of the Sphinx, and it's going to be the story of a little girl as she tries to follow in her father’s adventurous footsteps.

Thanks for the interview!

Jules: My pleasure. Thank you for your time.

Joe: I hope the endpapers for the second Brownstone live up to the first book!