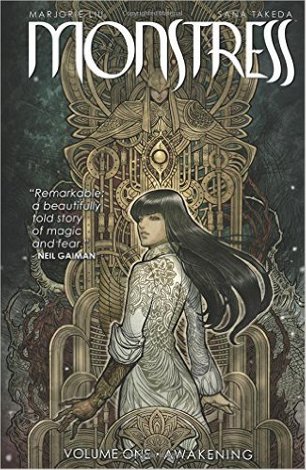 When you’re writing a review, ‘speechless’ can be a bit of a hindrance. So, I’m gonna work on that, find my words, and try to tell you about this book.

I fully admit, as I have a few times before, that the cover for Monstress is what drew me in and convinced me to purchase the book. The art deco background elements are so incredibly detailed and rich, reminding me a bit of my recent trip to Kansas city for WorldCon, where the downtown area is filled with art deco designs and buildings. There are hints in that background image – or maybe they’re flavors? – of ancient mythology, perhaps Egyptian with the golden eye staring back at you – or something quite darker? And then there’s the figure of Maika Halfwolf looking over her shoulder in a very manga-inspired character style yet covered in those same art deco elements climbing up her white robe or dress.

I was doomed. Doomed to be unable to walk away from this book. Clever cover artist.

A couple posts ago, I talked about White Sands from Brandon Sanderson; an epic fantasy with a wide-sweeping scale. Monstress is no less epic in breadth and wonder, and, if it were published as a novel, would be the kind that doubles as a step-stool or spider-squasher. In a word: huge.

In Monstress, Majorie Liu has created something truly worthy of the word ‘epic’. Following in the wake of a war between humans and Arcanics, we follow the one-armed Maika Halfwolf, a teenager filled with an anger she can’t control nor truly fathom. She is on a quest to learn the truth about her past, her mother’s life, and the final moments of the war between the races when a weapon of mass destruction went off killing everyone for fifty miles, forcing a ceasefire and a bit of a cold war. She allows herself to be taken captive and sold as a slave to the Cumea, a sort of scientific guild who experiment on Arcanic’s like Maika. Not all Arcanics look ‘normal’ as Maika does, many share traits or forms with animals – fox tails, fur, etc.

Maika has a power she doesn’t understand and cannot control. It seems to only appear when she’s in mortal danger, and she counts on it now to save her before the Cumea can use her the way they have so many other Arcanics.

This is a dark world and full of danger, intrigue, and machinations. Maika discovers the past is not exactly as she remembered or understood it to be. Some see her as a monster, others as something to be used, and just about everyone wants to destroy her.

There’s so much going on in this book, and much of it compressed into the first thirty or so pages as we’re introduced to this world and its inhabitants. I admit having to go back and forth a bit to keep up with it all. Liu has developed a complicated and engaging world and filled it with a diverse cast of characters. The Arcanics come in all shapes and sizes and appear to be inspired by the mythologies of the world, including China and Japan. The Cumea – who are also called witches throughout the book – appear to draw their inspiration from archetypal evildoers from not just mythology, but also pop culture, manga, and anime. They have that over-the-top evil quality I’d expect from those sources. All in all, it meshes well the various cultures and styles – East and West – into a cohesive story that hooked me from the start.

The art – a lot of times the cover art doesn’t necessarily represent the interior pages. Much to my delight, co-creator and artist Sana Takeda maintains the quality of the art from cover to cover. Page after page reflect the same style, detail, and density as that gorgeous cover.

Liu also uses the story to shed a light on racism, war, and gender roles – all in a fantastic way that pushes the reader to question assumptions and the status quo.

This is the kind of book you read and reread because there’s always some new bit to discover hidden in the art or the dialogue. Highly recommend.