Mosey on Up to a Weird Western Shindig 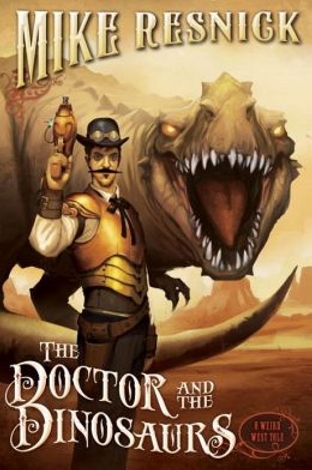 One of the most bizarre mash-ups in speculative fiction has to be the Weird Western. A Weird Western is a story that combines the tropes of Westerns with elements of the fantastic, whether those elements be science fiction, fantasy or horror. Weird Westerns have a long history that can be traced back to the early days of Weird Tales magazine. What makes these stories so alluring is the "weird" part; science fiction, fantasy and horror elements are usually not associated with the popular "horses, cowboys and gun fighting" image of Westerns, thus the combination of the them seems a little off-putting. Nevertheless, infusing fantastical elements into Westerns creates a distinct and appealing flavor all its own that makes such stories well worth a closer look. So let's take a quick peek at some relatively recent Weird Western releases.

Ask several people who are familiar with Weird Westerns for some example authors, and the one name that will dominate is Joe R. Lansdale. Lansdale is a writer who writes many kinds of stories, but there's something extra special about his Weird Westerns. His most popular Weird Western series revolves around Reverend Jebediah Mercer, a preacher who knows a thing or two about monsters, since he routinely goes up against undead zombies, werewolves, cannibals and other supernatural foes. Is it any wonder Reverend Mercer has more faith in whiskey bottles and guns than he does in God? You can check out Mercer's incredibly fun (and weird) adventures in the novel Dead in the West and in Lansdale's collection Deadman's Road.

The Heaven's Gate Chronicles by Guy Adams is a Weird Western series with an enticing premise. It's about a town called Wormwood that only appears for 24 hours once every 100 years and is home to Heaven's doorway. It makes its first literary appearance in The Good, The Bad and the Infernal, which sets the stage in the Old West of 1889, where a cast of troubled characters seek salvation. The sequel, Once Upon a Time in Hell, shows that Heaven may not be the place it's cracked up to be when the afterlife proves to have its own agenda and it's not altogether clear which side of reality is the best.

Mike Resnick also has a stake in the Weird Western game with a series of Weird West novels that present a steampunk-flavored alternate 1800s in which America's borders do not extend beyond the Mississippi River. That's because the magical ministrations of the American Indians have closed off that territory for expansion. That doesn't mean there aren't Americans in that region, though, as evidenced by The Buntline Special, in which Tombstone, Ariz., (home of the OK Corral) is the setting for a zombie showdown featuring Doc Holliday, the Earp brothers, the Clanton gang and Johnny Ringo. Thomas Edison is also a major character on hand, tasked by the government to counteract the Indian magic using science. The Doctor and the Kid moves the story to Deadwood, Colo., where Doc Holliday is looking to make some extra cash as a bounty hunter out to nab Billy the Kid. In The Doctor and the Rough Rider, it looks like the halt

on American expansion to the West may be lifted until some Indian tribes conspire to create a huge, monstrous, medicine man named War Bonnet to kill Theodore Roosevelt and thus keep America East of the Mississippi River. In the latest book of the series, The Doctor and the Dinosaurs, an ailing Doc Holliday is enlisted for one last mission by the great Indian Geronimo in exchange for one year of restored health. This time, Holliday is to protect two men who are accused of desecrating tribal territory in Wyoming. Resnick's Weird Western stories are fun and are, as much as they can be, rooted to real-life history.

The Hexslinger series by Gemma Files is a post–Civil War Weird Western that incorporates not only monsters but the gods themselves. The premise if that the Mayan goddess Ixchel uses "Reverend" Asher Rook as an unwilling vessel to birth her pantheon of gods back into the world of the living. Ixchel establishes Hex City—a city state defying the very laws of nature—which serves as a nice platform for introducing all sorts of gods and monsters. The stories play out in three novels: A Book of Tongues, A Rope of Thorns and A Tree of Bones. All three novels are collected in The Hexslinger Omnibus which also includes some short stories set in this captivating world.

Felix Gilman's The Half-Made World, which combines the Old West with steampunk and magical realism, involves two rival factions (the Line and the Gun) that split the "unmade world" of America in two. The Line is a totalitarian industrial regime and the Gun promotes a land riddled with outlaws and chaos. Only the mythical Red Republic could stop them, but they're supposedly long gone. Meanwhile, Psychologist Liv Alverhuysen is caught in the middle, unknowingly guarding a secret that either side would do anything to possess. In The Rise of Ransom City, Liv is lost on the edge of the world with an agent of the Gun while Harry Ransom, inventor of the world-changing Ransom Process, is heading their way.

Here are some more suggestion for your trip into Weird West territory:

¨  Dead Mans Hand: Five Tales of the Weird West by Nancy A. Collins

Weird Westerns seem to have no intention of riding off into the sunset just yet. A new anthology of short Weird Western stories was recently announced. Dead Man’s Hand, edited by John Joseph Adams, is due out in May 2014 and boasts a list of contributors that includes Orson Scott Card, Tad Williams, Kelley Armstrong, Joe R. Lansdale, Hugh Howey, Elizabeth Bear, Alastair Reynolds, Seanan McGuire, Jonathan Maberry, Ken Liu and more.

John DeNardo is the editor of SF Signal, a Hugo Award-winning group science-fiction and fantasy blog featuring news, reviews and interviews. You can follow him on Twitter as @sfsignal.