Murderbot #4: The end but not The End 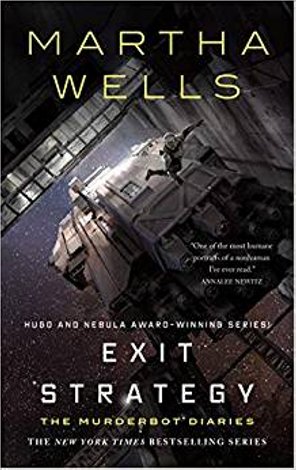 For fuck’s sake, these humans are always in the way, trying to save me from stuff.

In this new episode of The Continued Adventures of Murderbot: CLOSURE! Dr Mensah! EMOTIONS! Conspiracies! Action! Friendship! MORE EMOTIONS! The fourth—AND FINAL! WOE IS ME—entry in Martha Wells’ series of novellas, Exit Strategy follows Rogue Protocol, Artificial Condition and All Systems Red, all of which I have enthusiastically reviewed here. The series stars Murderbot, a self-hacked SecUnit whose main protocol was taking care of the human clients it has been tasked to protect until it became a self-governing unit on the run from an Evil Corporation while learning how to function in the human world.

In this conclusion, Murderbot learns that its actions against GrayCris corp in the past two instalments have caused problems for Dr Mensah, the human who has acted as its formal owner and who has become somewhat of a friend. Maybe. Murderbot is not entirely sure. But it knows that it must go back to help and to save Dr. Mensah from a tricky situation even if means putting itself in danger. Because, well. That’s what friends are for, right?

Exit Strategy gives us a riveting, emotional conclusion to Murderbot’s arc that started with All Systems Red, coming full circle with the story and relationship between Murderbot and Dr Mensah. The most beautiful thing about their relationship and perhaps of the entire series is their mutual understanding: the things they do for one another out of friendship, out of respect and maybe even love. Dr Mensah’s astute understanding that even though Murderbot LOOKS human and even has organic parts (which, oh boy, annoys the hell of it), the thing Murderbot does not want to be is human. Because it isn’t. It just wants to be itself, and free.

In the process, Murderbot compulsively watches TV serials as both coping mechanism for its anxiety and as a map to navigate and understand human emotions. It constantly references the TV shows it loves and eagerly consumes—this works not only as a comic respite but also as a beautiful indication of its complexity. And just like in the previous entries, Exit Strategy looks at Murderbot’s emotional arc without quitting on its high stakes action sequences that turn out to be bloody and super dangerous.

Murderbot has an exit strategy, a plan, but that plan is kinda of foiled. There is a moment here of reforming itself and its relationships with the world outside that leads to a single moment of decision. But then Murderbot learns it has options and that, friends, is everything.

I'm sad to see the series of novellas end, and if I could have my way, I would have one million more novellas featuring Murderbot. BUT there is hope in the horizon! Though this is the last novella in the series, the author announced a whole new novel coming out in 2020. The wait is long but I am sure it will be worth it.