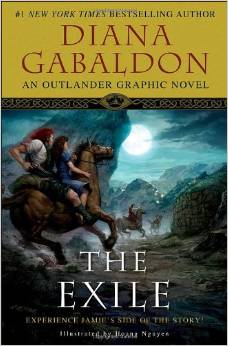 This week I wanted to take a look at a graphic novel based on the Outlander books by Diana Gabaldon. If you weren’t aware, Outlander premiered as a new television series on the cable network STARZ on Saturday, August 9th, so it felt like the right time to talk about this one.

I have to admit, I’ve never read the Outlander series, but I’ve heard enough about it to understand the basic premise. If you haven’t read it either, or don’t want spoilers, now is your chance to run for the hills!

In Outlander, a nurse named Claire Randall is on holiday in Scotland with her husband, Frank, who is researching his genealogy. It’s shortly after World War II, and both of them spent time serving during the war. During the trip, she goes exploring, looking for plants with medicinal values, and falls asleep near a ring of ancient stones. When she wakes, she finds herself in 18th century Scotland. She encounters a man named Captain Jack Randall who claims to be Frank's ancestor. Before she can find out more, the Captain is knocked unconscious by a Scot named Jamie MacTavish—also known as James Fraser. This is where her real adventure begins.

The graphic novel Outlander: The Exile tells the story from James’ point of view. It begins with his returning to Scotland from France. He is immediately drawn into conflict with Black Jack Randall, who is determined to find and arrest James. While crossing the countryside with his godfather, Murtagh, they are chased by Randall and his soldiers, taking refuge for the night near an ancient circle of stones high atop a hill. During the long night, Murtagh witnesses an Auld One, a member of the fae, appear out of nowhere. He and James ride away only to come across Dougal MacKenzie, James’ uncle, who’s come to fetch him to swear an oath of fealty to Colum, Laird of the MacKenzie clan. When James is wounded in a battle with Randall, they come across another faerie who helps him by putting his shoulder back into the socket—it’s Claire.

I sat down to read this graphic adaptation without having read the original novel. Now, I think that was a mistake. The graphic novel feels like a very fragmented story. It’s possible someone who had read the b

ooks would look at this and feel like it’s filling in the blanks, but for me, it was the other way around. I kept scratching my head and wondering what I was missing. That feeling started around Chapter 5 (there are nine) and continued on. The story started jumping around and I was absolutely lost.

The book might just be worth it for the art, though, which is done by Hoang Nguyem and is ethereal and gorgeous. This hardcover book also includes an introduction by Diana Gabaldon, a “making of” section and a closing note from Gabaldon about the graphic novel and the collaboration process. All interesting stuff.

If you’re looking for an introduction to Outlander prior to the new TV series, I’d suggest a combination of the first book along with this graphic novel—but not the graphic novel alone.

Patrick Hester is an author, blogger and 2013 Hugo Award Winner for Best Fanzine (Editor - SF Signal), and 2014 Hugo Award Nominee for Best Fancast. He lives in Colorado, writes science fiction and fantasy, and can usually be found hanging out on his Twitter feed. His Functional Nerds and SF Signal weekly podcasts have both been nominated for Parsec awards, and the SF Signal podcast was nominated for a 2012, 2013, and 2014 Hugo Award. In addition to his Kirkus posts, he writes for atfmb.com, SF Signal and Functional Nerds.