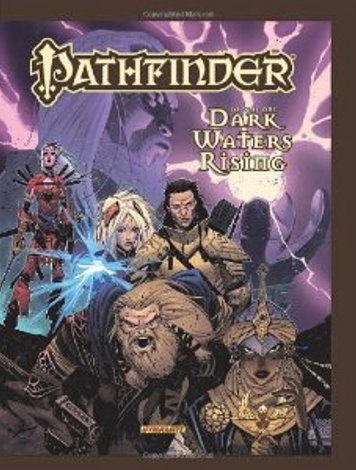 Set in the world of Golarion, the book captures the Pathfinder setting quite nicely, painting a diverse and rich world full of mysteries to be solved and gold to be earned—if you’re brave of heart. All the things you would expect are here, including Goblins, evil sorcerers, quests, taverns (and tavern brawls), underground labyrinths, giant spiders, magic and adventure. Lots of adventure.

I’ve mentioned before—I’m not a fan of the huge, over-muscled physiques normally associated in my head with Marvel mainstream comics (although DC does it too). The art in this book—done by the talented Andrew Huerta—follows that template. Everyone (and everything) is drawn in that "over the top" style. Yet it fits here. I can remember seeing that style in old posters and art depicting bulky heroes battling fiery dragons, and so it doesn’t bother me so much here. I may have had a few of those posters hanging on my walls growing up. Sometimes, though, the details in this book got to be distracting and took me right out of the story.

The thing about Pathfinder, and this book in particular, is that it reminds me of when I played a lot of role playing games such as Dungeons & Dragons, which the Pathfinder game system was based on thanks to an open licensing system Wizard’s of the Coast adopted a few years back. These comics—and the volume collects issues 1-6 of the series written by Jim Zub (Street Fighter Legends, Skullkickers)—are like going home again. I know these characters, even if I’ve never read a thing about them before. I know how Valeros will react in a situation, and it doesn’t take any of the fun away. It’s like watching an old Star Trek episode.

This feels like one of the old adventures my friends and I pulled out of a dusty box at Wonderland Comics in Fresno, as if all I have to do is pick up my dice and slip into any one of these character’s shoes—which is the intent, really. In the introduction, Paizo Publisher Erik Mona talks about how that’s exactly how they want the reader to feel. Kudos for accomplishing just that.

The story itself is compelling with equal parts darkness and humor. The friendships of the characters come through loud and clear. They’re like some awesome fantasy world A-Team.

I thoroughly enjoyed this book, and recommend it to anyone looking for a little Sword & Sorcery fun. Or, if you’re like me, for someone who remembers what it’s like to go trudging through a swamp with your friends, ready for adventure

(albeit, while actually sitting around your own kitchen table munching on chips and sucking down sweet tea, or pop).

Patrick Hester is an author, blogger and 2013 Hugo Award Winner for Best Fanzine (Editor - SF Signal). He lives in Colorado, writes science fiction and fantasy, and can usually be found hanging out on his Twitter feed. His Functional Nerds and SF Signal weekly podcasts have both been nominated for Parsec awards, and the SF Signal podcast was nominated for a 2012, 2013, and 2014 Hugo Award. In addition to his Kirkus posts, he writes for atfmb.com, SF Signal and Functional Nerds.