Pierre Boulle's Planet of the Apes 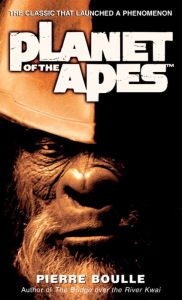 Science fiction is part of mainstream culture now: movies franchises like Star Wars and television shows have attracted millions of followers. This is a very different environment from that of the earlier days of science fiction, when the genre was largely confined to dedicated fans reading every magazine and novel they could get their hands on. The transition from niche group to mainstream attraction didn’t happen overnight: there were early starting points that began to tip science-fiction into the popular consciousness. One such point was Pierre Boulle’s 1963 novel, La planète des singes, better known as Planet of the Apes.

Boulle was born 1912 in Avignon, France. He trained as an engineer, and in 1936, he travelled to Malaysis to work on a rubber plantation. With the outbreak of World War II, he was called into service. When Indochina fell, he fled to Singapore, where he joined the Free French Mission. He was captured in 1943 and sentenced to a life of hard labor. In 1944, he escaped, making contact with British forces and then serving out the rest of the war in Calcutta as a Special Forces soldier.

At the end of the war, Boulle returned to Paris and began to write, publishing William Conrad in 1950 and Le sacrilège malais in 1951. However, it was his third book, Le Pont de la rivière Kwaï, which brought him to the world's attention. Published in 1952, the book drew heavily on his experiences during World War II. The novel was later translated as The Bridge on the River Kwai and turned into a movie in 1956, sta

rring Alec Guinness. The movie went on to win an Oscar for Best Picture, Best Actor, and Best Screenplay.

Boulle penned several other novels in the following years, but it was his 1963 novel La planète des singes that brought him into the realm of science fiction. The novel was translated into English by Xan Fielding in 1964 as Monkey Planet, and later as The Planet of the Apes. The novel was a satirical science-fiction adventure in which a team of astronauts are sent out into space, where they come across an Earthlike planet orbiting Betelgeuse. There, they find that the planet is inhabited by intelligent, advanced apes, who take them prisoner. Humans on this planet are treated like cattle, but they slowly convince their captors that they are intelligent. They're given freedom, and learn that there was once an ancient city on the planet that proved that humans had at one point been intelligent.

Later, they escape from the planet and return home, only to find that Earth has followed a similar path: apes have overtaken humans here as well. The book is revealed at the end to have been a recounted story that a pair of apes come across, and they believe it to be a fantasy.

The Encyclopedia of Science Fiction described the book as "a witty, philosophical tale à la Voltaire, full of irony and compassion," and the novel quickly became a popular one. Prior to the novel's release, Boulle sold the rights to Arthur P. Jacobs, known for movies such as Doctor Doolittle, to adapt the book into a movie, and he brought the project to 20th Century Fox. The studio brought Rod Sterling, known for The Twilight Zone, onboard to pen the first screenplay for the movie. Ultimately, his draft was rejected because of the expense, and the studio scaled the film down. The end result kept parts of the original screenplay but veered away from the book significantly: rather than taking place on another planet, it takes place on a future Earth, which is revealed when lead star Charlton Heston discovers the Statue of Liberty.

eaters, followed by Conquest of the Planet of the Apes in 1972 and Battle for the Planet of the Apes in 1973. The latter two films imagined the rise of the planet seen in the first movie. A television show followed in 1974, and another in 1975, before the franchise largely ended. Follow-up novelizations of the other films involved other authors like Michael Avallone, Jerry Pournelle, John Jakes, and David Gerrold, in an early sort of expanded universe, in which multiple authors worked on a shared project and universe. Boulle remained in touch with the production of the movies, consulting on various story elements.

Beyond his more famous science-fiction creation, Boulle retained some science-fiction elements in his later stories: his 1966 novel Gardens on the Moon, which follows a fictional space race, is but one example. However, his name is indistinguishable from the franchise that he helped create. Planet of the Apes is notable because it was one of the most successful examples of science-fiction cinema up until the release of Star Wars in 1977. The movie franchise helps to mark the 1960s as a point when science fiction as a distinct genre began to reach mainstream audiences: before this time, genre stories largely existed in magazines and novels. By the end of the 1960s, this was changing: shows such as Star Trek and franchises such as Planet of the Apes were introducing larger audiences to genre stories. As cinema and viewing habits changed, science fiction became only more and more popular with audiences.