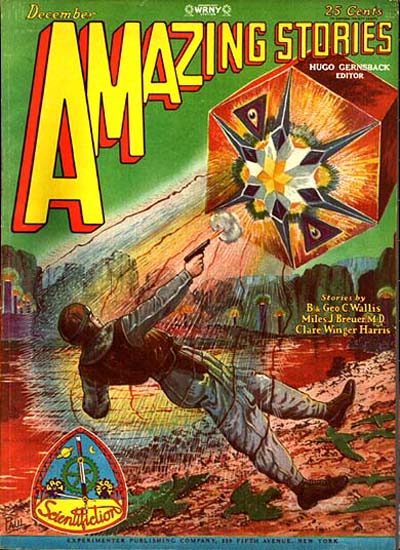 That the third prize winner should prove to be a woman was one of the surprises of the contest, for, as a rule, women do not make good scientifiction writers, because their education and general tendencies on scientific matters are usually limited. But the exception, as usual, proves the rule, the exception in this case being extraordinarily impressive. The story has a great deal of charm, chiefly because it is not overburdened with science, but whatever science is contained therein is not only quite palatable, but highly desirable, due to its plausibility. Not only this, but you will find that the author is a facile writer who keeps your interest unto the last line. We hope to see more of Mrs. Harris's scientification in AMAZING STORIES.

That was Clare Winger Harris' introduction by Hugo Gernsback in the June 1927 issue of Amazing Stories. Six months beforehand, she had submitted a short story to one of the magazine's many contests, and earned third place and a $500 prize ($6,388 in 2015). Gernsback's introduction eight decades later reads as harsh, sexist and inaccurate, but there was a degree of truth to the words: there weren't many female science-fiction writers at that point in time, and while there were female scientists, they were vastly outnumbered by their male counterparts in no large part due to systemic biases in education at that time. Harris became the first female science-fiction author to write under her own name, and while sh

e wasn't the first female author writing in the genre, forgoing a pen name is a notable decision.

Clare Winger was born on January 18th, 1891, in Freeport, Illinois, to Frank Stover Winger and May Porter Stover, who both came from manufacturing backgrounds in the Chicago area. She attended Smith College in Northampton, Massachusetts, and eventually married the architect Frank Clyde Harris in 1912. The desire to write seems to have been common in her family: in 1917, her father published a single novel, The Wizard of the Island, or The Vindication of Prof. Waldinger, described as a "Jules Vernian story of super-science set in the South Seas." It's not known if Winger was an inspiration for his daughter, vice-versa, or some variation thereof, but a decade later, she followed in her father's footsteps and published a novel, Persephone of Eleusis: A Romance of Ancient Greece, in 1923. Her foray into the science fiction world came in 1926, when her story “A Runaway World” appeared in the July issue of Weird Tales Magazine under the name Mrs. F C Harris.

Her bigger breakthrough came when she earned the third place prize in the Amazing Stories contest. According to Eric Leif Davin in Partners of Wonder: Women and the Birth of Science Fiction,"The odds were against her. Attracted by the huge prize, 359 other aspiring authors had also sent in stories." As Gernsback noted, there were major obstacles for female authors during this time: women who had stories accepted were often asked to take on a male name by editors so afraid that their mere presence would be a detriment to the sales of the magazine. Harris helps to demonstrate that this fear was needless. “The Fate of the Poseidonia” was the first of several additional stories from Harris to appear in the magazine and it received widespread attention. According to Mike Ashley, "She was the first regular female writer of science fiction in the specialist magazines," although she wasn't the first female author to regularly publish speculative content: Francis Stevens (pen name for Gertrude Barrows Bennett), had been publishing her own stories for a decade in regular pulp magazines.

Harris followed up her June story with “A Certain Soldier” in the November issue of Weird Tales in the same year. In 1928, she followed up with three additional stories: “The Miracle of the Lilly (April), “The Menace of Mars” (October) and “The Fifth Dimension” (December), all in Amazing Stories. In 1929, she published four stories: “The Evolutionary Monstrosity (Winter 1929, Amazing Stories Quarterly), “The Diabolical Drug” (May, Amazin

g Stories), “The Artificial Man” (September, Science Wonder Quarterly), and “A Baby on Neptune” (December, Amazing Stories; co-written with Miles J. Breuer). Her final story appeared in the May 1930 issue of Science Wonder Quarterly, titled “The Ape Cycle.” At the age of 39, she left writing to focus on parenting, but she briefly returned in 1947 with a collection of her stories titled Away from the Here and Now: Stories in Pseudo-Science.

Harris died on in October 1968 in Pasadena, California, and nothing is known about her life after her brief experience in the science-fiction world. Despite that short time, however, she demonstrated that the science-fiction world wasn't a male-only field. Other authors followed: C.L. Moore published her first story in Weird Tales in 1933, while Leigh Brackett joined the Los Angeles Science Fiction Society in 1939. The floodgates were opened, and a whole new group of authors began to write down their stories.