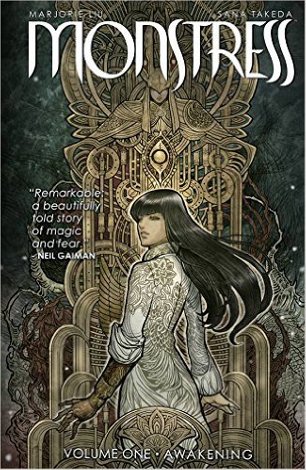 As I’m packing up and getting ready to hit the hallowed halls of WorldCon, I thought I’d take a look at the upcoming graphic novels I can’t wait to read – and have already added to my pull list.

Monstress by Marjorie Liu (Author) and Sana Takeda (Artist). I’m leading with this because, technically, I’ve already bought it. When I saw it, I snatched it up. The cover is intriguing, as is the description and interior art. That it comes from the prolific author Marjorie Liu, known for her urban fantasies and work on Marvel’s Astonishing X-Men, only adds to my desire to read this book. The premise here – an alternate reality 1900’s Asia, plus Liu’s diverse and rich casts of characters – is what sealed the deal for me.

Official Description: Set in an alternate matriarchal 1900's Asia, in a richly imagined world of art deco-inflected steam punk, MONSTRESS tells the story of a teenage girl who is struggling to survive the trauma of war, and who shares a mysterious psychic link with a monster of tremendous power, a connection that will transform them both and make them the target of both human and otherworldly powers.

Already out and in my to be read pile!

Jim Henson's Labyrinth Tales (Hardcover) by Jim Henson (Author) and Cory Godbey (Author). I definitely grew up ‘on the street’ – Sesame Street. Jim Henson’s creations and his seemingly limitless imagination helped to define much of my childhood. From Muppets to Farscape, I’ve always been delighted by anything with his name attached to it. Of all the Henson movies, Labyrinth continues to hold a place in my heart, as I hope it does in yours as well. It showed a sophistication of design and storytelling many didn’t think possible from Henson, and they were wrong. Heading back there in the form of this book feels like going home again, and I can’t wait to check it out.

Official Description: Experience the endlessly imaginative world of Jim Henson’s Labyrinth through the eyes of its most fantastical and beloved characters! Witness a day in the life of Sir Didymus, the recklessly heroic fox-terrier; Ludo, the lovable oaf; Hoggle, an ever loyal companion; and others as they play games, work together, and revel in the magic of the labyrinth.

The Bill the Cat Story: A Bloom County Epic by Berkeley Breathed (Author, Illustrator). If I haven’t mentioned it before, allow me to do so now – I love “Bloom County”. I remember reading it in the newspaper ‘funnies’ with my Grams. It wasn’t one of her favorites – she preferred “Lil’ Abner”, “Garfield”, and “Charlie Brown”. But for me, there was something subversive about the strip, and I almost felt like reading it meant breaking a rule somewhere. When I had the money, I bought the collections. I especially liked the ones showing the ‘early days’ of Breathed’s career where he was still figuring out who the characters were and how to draw them. The return of “Bloom County” via Breathed’s online presence has been amazing and a breath of fresh air for a medium that’s become almost niche these days – the three panel comic strip. But, like many of those who have fought for ground and respect online, Breathed has managed to create something truly wonderful and recapture the magic that made “Bloom County” so fun and subversive all those years ago. One of his most enduring characters is Bill The Cat. I once had a 45 record from the newspaper containing a song from Bill’s heavy metal band, Deathtongue. So, to say that I’m stoked for a book that describes Bill’s origin story, would be an understatement.

Official Description: The Pulitzer Prize-winning creator of the "Bloom County" comic strip is back! To help celebrate, here is the first ever Bloom County picture book, featuring fan-favorite Bill the Cat! (Ack ack!) Almost thirty-five years ago Berkeley Breathed launched a little-known comic strip called "Bloom County" that was full of characters who instantly entered the public consciousness--none more so than Opus (the penguin) and Bill the Cat. Bloom County's popularity soared, it was soon syndicated nationally, had millions of daily readers, and before long its creator was awarded a Pulitzer Prize. Then, nine years later, "Bloom County" sadly came to a close. It had simply ceased being fun for Berkeley Breathed.

Now, more than twenty-five years after it ended, "Bloom County" has returned in full force online, with an ever-growing fanbase every bit as zealous as it was in the strip's heyday. For the comic's youngest fans, and for those who never stopped wishing for its return, here is an all-new, kid-friendly story for anyone who ever wanted to know the origin story of Bill the Cat. "Bloom County" has never been more fun!

Doctor Strange Omnibus Vol. 1 (Hardcover) by Stan Lee (Author), Steve Ditko (Author), Roy Thomas (Author), and Dennis O'Neil (Author). With the upcoming Marvel Studios adaptation of “Doctor Strange” coming to theaters in November, I’m expecting Strange fever to be rising as we get closer to that release. A good way to get caught up on the character’s origin and history would be this book. I don’t have a lot of exposure when it comes to Doctor Strange. He was one of those characters who popped up from time to time in other books I read like “Spider-Man” and “The Avengers”. As such, I’m going into the movie with a mostly clean slate. That doesn’t mean I wouldn’t mind a little primer first. Plus, this is coming in hardcover, which makes it a nice collectible and addition to my (growing) library of graphic titles. Which reminds me, I’m gonna need more bookshelves…

Official Description: A vain man driven by greed and hubris, Dr. Stephen Strange was a world-renowned surgeon until the night a car accident crippled his hands. Broken and destitute, he journeyed to Tibet to seek a cure from a legendary healer. He found not a man of medicine but the venerable Ancient One and the path to the mystic arts! Stan Lee and Steve Ditko reinvented the super hero with the Amazing Spider-Man, but from Dr. Strange's eerie house on a Greenwich Village corner they created new dimensions and otherworldly terrors. These stories remain as influential today as they were on 1960s' counter-culture. Marvel is proud to offer this Omnibus collection of the complete Lee/Ditko Doctor Strange run.

The Unbeatable Squirrel Girl Beats Up the Marvel by Ryan North  (Author) and Erica Henderson (Illustrator). If you traveled back in time and told much-younger me that I would one day be looking forward to reading a comic about Squirrel Girl, he’d cock his head to the side and ask, “The one from the Great Lakes Avengers?” And then not believe a word of it.

The point being, you never know when a character is going to break free from relative obscurity to become something more – which is exactly what’s happened with Squirrel Girl. She went from essentially a B (or perhaps C) character to one who has won the hearts and minds of comic fans. So is it any wonder they’ve not only given her a series of her own (“The Unbeatable Squirrel Girl”), but a brand new graphic novel? Irreverent? Yes. Poking fun at the entire Marvel Universe and herself? Yep.

Official Description: Proof that we're living in the best of all possible worlds: THERE'S GONNA BE A SQUIRREL GIRL GRAPHIC NOVEL! It's a stand-alone adventure that's both great for new Squirrel Girl readers, and also for people who ALREADY know about how she can talk to squirrels and also punch really well! Behold: a story so HUGE it demanded a graphic novel! A story so NUTS that it incorporates BOTH senses of that word (insanity AND the weird hard fruit thingies) (they're fruits, did you know that?) (I didn't until I looked them up just now, so looks like we're all learning science from this solicit text for a comic book!) Squirrel Girl has defeated Thanos, Galactus, and Doctor Doom. TWICE. But in this all-new graphic novel, she'll encounter her most dangerous, most powerful, most unbeatable enemy yet: HERSELF. Specifically, an evil duplicate made possible through mad science (both computer and regular) as well as some Bad Decisions. In other words, SQUIRREL GIRL BEATS UP THE MARVEL UNIVERSE! YES. I CAN'T WAIT, AND I'M THE GUY WRITING IT.