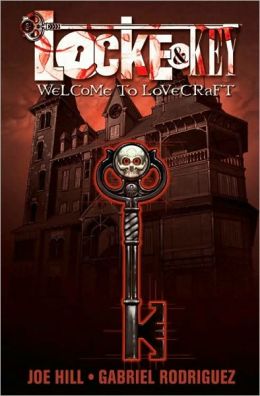 In this space, I often talk about novels that are being adapted as television and movie projects, but there is another format that is a fountain of source material for television shows and films: graphic novels.

Graphic novels are often dismissed as "children's comic books." Anyone who believes that is sadly misinformed. Graphic novels can be just as deep and meaningful as prose novels. Both tell a story, it's just the storytelling medium that's different.

And speaking of different storytelling mediums, here's a batch of graphic novels that may soon find their way to the visual mediums of television and film.

First up is Locke & Key, a dark, epic fantasy series written by Joe Hill and illustrated by Gabriel Rodriguez. You may know Joe Hill's name from his bizarre horror novels Heart Shaped Box, Horns (adapted into a 2014 film starring Daniel Radcliffe), and NOS4A2. Locke & Key is no less bizarre. The story revolves around a house that contains magical keys that give people a variety of powers and abilities. The house is the ancestral home of three siblings, who move into the house after the gruesome death of their father. Unbeknownst to the siblings, the keys are also sought after by an underhanded demon. (Is there any other kind?)

ducers Alex Kurtzman, Roberto Orci, Bobby Cohen, and Ted Adams (from IDQ publishing, who publishes the graphic novels) have hired Albert Torres (Henry Poole) to write the screenplay. Hopefully, this production will take off since Locke & Key is widely lauded as one of the best graphic novel series around. A previous attempt at launching this by Fox TV never materialized, but since volumes of Locke & Key have been New York Times bestsellers, it's being given another chance.

Last year, I talked about the adaptation of Neil Gaiman's Sandman graphic novel series. That particular universe continued on past the original graphic novel. Case in point: writer Mike Carey wrote a Sandman spinoff called Lucifer, based on a supporting character from the Sandman series. Lucifer is the disillusioned and bored Lord of Hell, who resigns from the throne, abandons his kingdom, and moves to Los Angeles where he opens an exclusive piano bar called Lux with the assistance of his female consort, Mazikeen. Lucifer, who is portrayed as a gentleman-devil (one whose look was modeled after singer David Bowie), wrestles with themes of free will versus destiny.

Lucifer is on track to be adapted by Warner Bros TV. Tom Kapinos (the writer and producer of the Californication series) will executive produce and write the television adaptation of the Lucifer series. This adaptation of the DC Comics/

Vertigo graphic novel helps round out the line of already-in-production DC Comics/Vertigo properties like Arrow, Gotham, The Flash, and Constantine. No stars are attached to the Lucifer project as yet. My guess is that, unfortunately, David Bowie might be too old for the target demographic. Too bad, because he would have rocked it.

Hansel and Gretel by Neil Gaiman and Lorenzo Mattotti

Speaking of Neil Gaiman, Hollywood isn't quite done with him yet. Last year, Gaiman wrote a graphic novel adaptation of the Brothers Grimm fairy tale Hansel and Gretel. We all know the story, right? It's about a brother and sister who encounter a fiendish witch (Is there any other kind?) deep in the forest, who threatens to cook them for dinner. The story takes on a whole new beauty and magic when told through Gaiman's enchanting prose and accompanied by Lorenzo Mattotti's dark and eerie charcoal illustrations. (The illustrations were inspired by the Metropolitan Opera production of Engelbert Humperdinck's 1893 opera Hänsel und Gretel.)

Producer Juliet Blake (The Hundred-Foot Journey and the Farscape TV series) has purchased the film adaptation rights to the graphic novel version of Hansel and Gretel. It's being planned as a live-action film, not an animated version. Time will tell if turns out better than the 2013 film Hansel & Gretel: Witch Hunters, which starred Jeremy Renner and Gemma Arterton. But chances are good that it will be.

and Paul Mullie made names for themselves in Hollywood as producers for the television series Stargate SG-1 (a television adaptation of the 1994 film which starred Kurt Russell and James Spader), Stargate: Atlantis, Stargate: Continuum and Stargate Universe. In 2012, the writing team plied their craft in the world of graphic novels with the Dark Matter series(with illustrator Garry Brown). Dark Matter revolves around six people (three men, two women, and a young boy) who wake up in a spacecraft with no memory of their past. The craft they are on arrives at a mining colony, where they befriend the locals and they inform them that a team of mercenaries is being sent by the controlling corporation to wipe out the colonists. The news fractures the new arrivals and reveals their true loyalties.

Since Dark Matter was originally conceived as a television show, it makes sense that it be adapted for television. That's exactly what the SyFy channel is planning to do with 13 one-hour episodes. Mallozzi and Mullie will act as both writers and executive producers for the series, which will air sometime later this year. The ensemble cast includes Melissa O’Neil (Les Miserables), Marc Bendavid (Bitten), Anthony Lemke (White House Down), Alex Mallari Jr. (RoboCop), Jodelle Ferland (Twilight), Roger Cross (The Strain) and Zoie Palmer (Lost Girl).