Read These Speculative Fiction Books Now, Ahead of Their Film and TV Adaptations 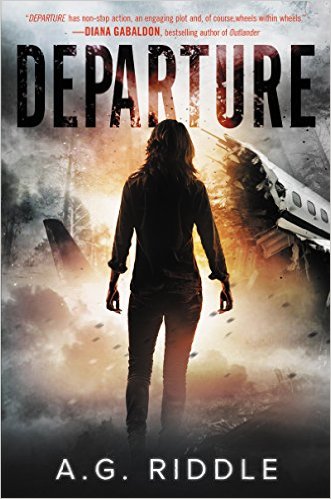 One of the joys of book-to-film adaptations is comparing the adapted work with the book upon which it was based. Adaptations are rarely 100% true to the original work, but that's often the result of changing the storytelling medium. Even so, you get to see what was cut, what was added and how the filmmakers envisioned the fictional words. To help you get a jump on comparing books and film, here's the latest roundup of speculative fiction books that have been optioned for possible adaptation.

Vonnegut is not usually an author mainstream readers associate with science fiction—a position the author himself asserted because market realities were not kind to such authors not too long ago—yet many of his stories do contain speculative fiction elements. His 1963 novel Cat's Cradle is a good example of this. It's a novel of the apocalypse brought about by mankind and his madness. The main protagonist is Felix Hoenikker, a Nobel laureate physicist and chemical scientist modeled after Robert Oppenheimer, the "father of the atomic bomb." Hoenikker has created a new chemical weapon called Ice-Nine, which has the potential to convert all liquid to inert ice and thus destroy human existence from the face of the planet. Hoenikker is exiled to a remote island where a new religion called Boskonism uses technology with the intent of destroying the human race.

Earlier this year, IM Global Television announced it will adapt Vonnegut's madcap novel for television. Not much more is known, but the production company has stated that the novel's satirical viewpoints on religion, war, and technological advances help make Cat's Cradle a classic of all literature, not just science fiction. Vonnegut would be pleased.

A.G. Riddle's Departure is a science-fiction mystery that starts with a compelling premise: a plane takes off from New York in 2014, bound for London, but crash lands in the English countryside of a world very different from our own. The passengers include Harper Lane, who is on the cusp of a life-changing decision; Nick Stone, an American working on The Gibraltar Project, an effort to build a dam across the Strait of Gibraltar; Sabrina Schröder, a German scientist; and Yul Tan, a computer scientist who developed a highly advanced Internet based on quantum physics. The passengers soon learn that their lives are all interconnected in some way. They try to piece together exactly what happened, where they are, and why nobody has appeared to rescue them.

eparture were sold at auction in a seven-figure deal to 20th Century Fox. Steve Tzirlin will produce the film. Drew Goddard, the screenwriter for World War Z (another adaptation) and some episodes of the television show Lost (which featured another plane crash that threw its passengers into unknown circumstances), is currently attached to write the script based on Riddle's novel. The novel, it may be worth noting, was initially self-published by the author. That's quite a trek for a story.

Mostly known for his Dune novels, Frank Herbert turned to mysticism with his 1972 novel Soul Catcher. It concerns a militant Native American student Charles Hobuhet (also known as Katsuk the avenger), who kidnaps the 13-year-old son of the white American Undersecretary of State. Katsuk plans to use the boy as a sacrifice in an ancient ritual of vengeance against the people who attacked and abused his sister. The captor and his captive flee from hunters across the Pacific Northwest, forming an uneasy bond. The speculative fiction elements come in the form of the mysticism surrounding Katsuk, which seems at times to be magical in nature.

Soul Catcher was optioned for the film by producer Dimitri Villard (The Flight of the Navigator and Once Bitten). He has also brought Rene Haynes (Dances with Wolves) onto the project, who specializes in Native American casting. Chris Eyre (Friday Night Lights, Skinwalkers) will direct and John Sayles (The Spiderwick Chronicles, another adaptation) will write the screenplay for this psychological thriller with fantastic elements.

An Ember in the Ashes by Sabaa Tahir

In a fantasy world inspired by ancient Rome, people live under the harsh rule of the empire, where challenging those in authority brings deadly consequences. Laia knows this firsthand. She is a slave who has seen her grandparents killed and watches her brother be arrested for treason. With no other options available to her, Laia forms an alliance with rebels who will rescue her brother in exchange for Laia joining the Empire's military academy and spying from within their ranks. Inside the academy, Laia meets Elias, one of their best soldiers-in-training who nonetheless holds no loyalty to the despotic empire. Together, Laia and Elias realize that their destinies lay along the same world-changing path, which unfortunately crosses with the books' female lead villain, the Commandant.

Paramount scooped up the film rights to An Ember in the Ashes. Two producers are attached to the project: Haroon Saleem and Mark Johnson, both of whom produced another fantasy adaptation The Chronicles of Narnia: The Voyage of the Dawn Treader.