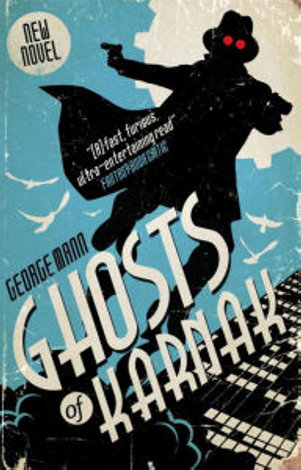 Captain America: Civil War just hit theaters and it's a critical and financial hit. And why not? People love superheroes. Superhumans fighting super villains and doing who-knows-how-much damage to city streets…what's not to love? If you are one of these true believers, you might like to know that more superhero goodness can be found in the pages of books.  Here's a look at some recent and forthcoming superhero fiction books…

Ghosts of Karnak by George Mann

I'm a big fan of George Mann's retro-superhero The Ghost, who fights crime in an alternate 1920s New York City where the predominate technology is steam power, not electricity. Like Batman, The Ghost lacks any superhuman abilities, but that doesn't stop him from donning a mask and rocket boots and going after the bad guys. Ghosts of Karnak is The Ghost's third exciting adventure.  It begins when a woman is found dead in the New York City streets with strange Egyptian symbols carved into her flesh. Ancient sinister forces are obviously at work, and it's up to The Ghost get to the bottom of things.

Powers is a novel that blends superheroes with urban fantasy. Based on the comic book series co-created by Bendis, Powers is about a homicide detective named Deena Pilgrim who works in a city where both the perps and the victims have superhuman abilities. Deena has a past she'd just as soon forget – hence the book's subtitle: The Secret History of Deena Pilgrim. But forgetting her past proves to be impossible when it's linked to a murder cold case that re-emerges and stirs up trouble. Even worse, the murder case is linked to Deena's family.

Cline's popular superhero/zombie mashup series Ex-Heroes continues with a new nail-biting installment. In the world of Ex-Heroes, even super-powered beings couldn't stop a worldwide plague that turned living humans into ex-humans. The heroes protect the last of humanity in a fortress-community known as The Mount. In Ex-Isle, years have passed since the plague, but danger still lurks. When The Mount's food supply is destroyed and the heroes search for more, they discover a small, man-made island in the Pacific Ocean. Even more surprising, it's populated by uninfected people who have not only managed to survive, but are farming their own food. However, what seems like a solution soon becomes a very big problem for the heroes.

I'm a big fan of short fiction, and so it was inevitable I'd include at least one collection of short fiction stories in this roundup. Your superhero short fiction pick is the latest entry in the long-running Tesseracts anthology series, which focuses on superheroes.  Superhero Universe boasts not only superheroes, but also supervillains, super-powered antiheroes, mad scientists, adventurers into the unknown, steampunk armored avengers, and unapologetic pulp action. It features twenty-five stories that will prove that one single idea can be the basis for many different flavors of fiction all surrounding the same theme.

What fuels our connection with superheroes? What makes them so important to us? What do superheroes mean for our future? Why do superheroes matter? These questions and many others are answered by the illuminating and entertaining essays written by the contributors of this intriguing collection. Authors such as Neil Gaiman, Carrie Vaughn, Jodi Picoult, Jamie Ford, and more talk about their favorite super-powered characters and what makes them so special.

What do you so when a personal tragedy breaks your family apart? If you're cult sci-fi television show actress Valerie Torrey, you take your son and leave Los Angeles and your co-star husband behind. But now it's years later and Val wants her son Alex to reunite with his estranged father, so Val and Alex set out on a road trip from New York to Los Angeles. Along the way, they encounter superheroes, monsters, time-travelers, robots, and a host of Comic-Con attendees. More metaphorical homage than a straight-up superhero story, Proehl's debut is being hailed as a "Kavalier & Clay for the Comic-Con Age.”