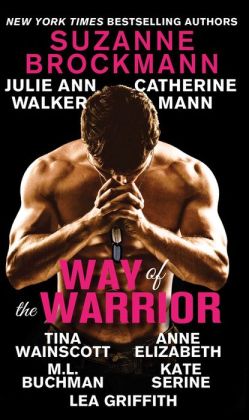 During the week following Memorial Day, it only makes sense that we look at a few military romances, with a nod of thanks to all of the men and women who have served, including some great romance authors.

To start, I hope you’ve all bought your copy of The Way of the Warrior, the anthology of short stories by authors Suzanne Brockmann, Julie Ann Walker, Catherine Mann, Tina Wainscott, Anne Elizabeth, M.L. Buchman, Kate SeRine and Lea Griffith. All proceeds from the authors and the publisher (Sourcebooks Casablanca) support The Wounded Warrior Project, a non-profit which provides a wide range of programs and services to veterans and service members who have survived physical or mental injury during their brave service to our nation. And with main characters who are themselves wounded warriors, placed in the talented hands of these terrific authors, what are you waiting for? A perfect tribute to our military this week.

At the RT conference earlier this month, there was a lovely event honoring the military organized by popular blogger Kim of SOS Aloha, and she is doing a month-long tribute to military romance at her blog, sosaloha.blogspot.com.

I’ve had the pleasure of meeting a few romance authors who both write about military heroes, and who served in the military, so I thought I’d focus on a few.

Cindy Dees has been writing military romance for Harlequin for years and her next title, Undercover with a Seal, comes out July 1. It looks like there’s a Navy Seal, some undercover work and a threatening Russian mob connection. Fun! (Though possibly even more fun is her September release, The Sleeping King, the first in an epic fantasy series, featuring the best of the genre: near immortal imperial overlords, a prophecy of a sleeping elven king who's said to be the savior of the races…and two young people who are set on a path to save the day.)

Cindy’s own life reads a bit like fiction: “After earning a degree in Russian and East European Studies, she joined the U.S. Air Force and became the youngest female pilot in its history. She flew supersonic jets, VIP airlift and the C 5 Galaxy, one of the world's largest cargo airplanes. She also worked part time gathering intelligence. During her military career, she traveled to forty-two countries on five continents, was detained by the KGB and East German secret police, got shot at, flew in the first Gulf War, met her husband and amassed a lifetime's worth of war stories.”

I met indie-published author Siera London briefly at RT, though I didn’t realize she was a former servicewoman. Her debut title, Chasing Ava, was an Amazon bestseller and the start of a new series based in the fictional world of Shell Cove M

edical Center, “a world of sacrifice, seduction, and sabotage where everybody has a secret….” With a pediatric nurse heroine and a surgeon hero, neither of whom do relationships, a dastardly sexually harassing villain and a few deeply kept secrets, there’s no shortage of potential conflict.

As for Siera, she served for over 20 years in the United Stated Navy as a registered nurse. She considers contemporary romance and women's fiction her therapy of choice, and is focusing on her new career, where she writes about sassy, sensual heroines and the Alpha Males that love them, flaws and all.

Finally, most people in the romance community have heard of Merline Lovelace, and she is a staple category romance author. I have to admit that, in checking on her book list, I found her recent e-release of a couple of bundled backlist titles to sound incredibly compelling: Danger in the Desert & Strangers When We Meet. This is the write-up of Danger in the Desert:

When Jaci Thornton finds a seemingly worthless scarab in a Cairo street, the librarian morphs from vacationer to adventurer. Unwittingly, she's fulfilled an ancient Egyptian prophecy, and unless sexy OMEGA agent Deke Griffin can protect her from its consequences, she may end up in Cairo's City of the Dead! With terrorists in pursuit, can Jaci and Deke also resist the desire burning between them?

A librarian, an ancient Egyptian prophecy, a sexy agent and terrorists? Sign me up!

I also have to put in a mention for her title The Hello Girl, previously traditionally published and now re-released electronically. While I have yet to read it, it hits all my must-read buttons, with a present day/historical connection and an intriguing historical main character who is a “Hello Girl,”the colloquial name for American bilingual female switchboard operators in World War I. I actually have a paper copy I came across the other day, and now I must find time to read it!

Merline served 23 years in the United States Air Force and retired as a colonel. After hanging up her uniform for the last time, she launched a second career as a writer, basing many of her tales on her own experiences in the military and on her travels around the globe.

Technically, Memorial Day is set aside to honor those who have fallen while serving their country, but it can’t hurt to show appreciation to our active military personnel and say thank you.So if you have the chance, take it.

As far as military romance goes, what are some of your faves?