Returning to the Force 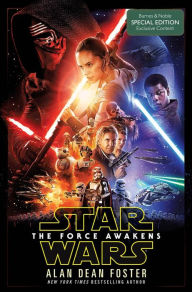 He started to object, caught himself. There’d been too much arguing over the years, he knew. This time he really might not come back; the last thing he wanted was to part on even a semblance of a spat. Instead, he took her into his arms, which really was much better than arguing, or even talking. They stood like that for a long moment, holding tightly to each other….He nodded without speaking. If nothing else, in thirty years he had learned when to be quiet.

There’s been an awakening…have you felt it? A major motion picture came out last week to much fanfare, mega marketing dollars, international merchandising, and publicity on every known outlet in this corner of the galaxy. Star Wars: The Force Awakens is here—after months of waiting, building buzz, and simmering anticipation. And with the release of the first film in a new, post–Empire Star Wars trilogy, comes the tie-in media. In this particular case, a tie-in novel.

Novelizations of major films are not a new idea—they are an often awkward, but potentially brilliant art form (see, for example The Omen or The Wrath of Khan). In the case of Star Wars novelizations, Alan Dean Foster is no stranger: he penned the original Star Wars: A New Hope novelization (ghostwriting for George Lucas) as well as other novels in the Expanded Universe. Add to this expectation the fact that Star Wars has enjoyed an incredibly powerful and successful publishing program outside of the films; even on the road leading up to The Force Awakens, this same publishing program has introduced tie-in comics, spinoff adult, middle-grade, and young adult novels. (A jaded observer might point out that this seems like a crass cash play—to which I would say, yes, but “the road to The Force Awakens” also includes some amazing gems for new and old readers alike.)

Which brings me to this particular novelization: Alan Dean Foster’s take on J.J. Abrams’ take on Star Wars, The Force Awakens. Released on December 18 after strict embargo, The Force Awakens (the novel) is…well, let’s say it’s a mixed bag. Or, to keep with the Star Wars metaphor, it contains aspects of both the light and dark side of the Force. For the dedicated, hard-core Star Wars fan, the novelization appeals not just because it’s a way to relive the excitement of the films—it also holds the potential of unveiling some spoilery, enlightening angles approved by The Powers That Be. The latter is why I decided to immediately purchase and read this book, hoping for more answers to nagging questions like, WHO exactly is Rey? What will happen to Leia and Luke? Will there be a romance between Finn and Poe? WHO IS REY?

Without any spoilers (I promise!) I’m mostly pleased to report that the novelization effort from Foster offers some additional color to the film—good and bad. On the good side, The Force Awakens novel offers a little more insight to Rey’s thoughts and feelings (especially her loneliness, which is implied by tone and feel of the film in the early scenes, but not given as much vocalization), as well as offers some interesting answers to questions about Supreme Leader Snoke, and more importantly, shows a little bit of remorse in Kylo Ren when THAT THING HE DOES happens. Also on the positive side, one of my favorite differences in the novel versus the film is the louder and more distinct voice that the book gives Leia as a general and leader of the resistance. We learn that she isn’t all buddy buddy with the new Republic (despite her standing as a war hero and politician), we learn of her profound sadness when it comes to her family, and there are some really beautiful, touching moments between her and Han. (GUH.) The novelization carries through all of the major plot points from the film, it includes some of the best and most endearing moments, as well as some of the most heartbreaking and earth-shattering.

However. The novelization also includes some incredibly, laughably lurid prose, bizarre interpretations of motivation that so don’t mesh well with my mental reckoning of the film. For example, this pivotal scene with Kylo Ren:

Alone in the room, Kylo Ren—saturnine of aspect, lithe of build, tortured of mien, and troubled of eye—gazed at the silent recipient of his confession.

There’s a choppiness and wordiness to the text and language in the novel, too, that doesn’t capture the funniness or winsomeness that each actor brought to the role onscreen. The overall impression I got from reading this book was that Foster got to read the script, but hadn’t seen the film yet (which is almost certainly what happened).

Still, with these issues aside: if you like movie novelizations, and if you’re a Star Wars junkie looking to flesh out your theory about Rey and her background, or a stickler for continuity and you really want to know how Poe Dameron escaped the First Order on Jakku after crash-landing, or understand just what makes Finn or Kylo Ren tick? Well, then, The Force Awakens is for you.