Road Trippin’ It with John Burningham 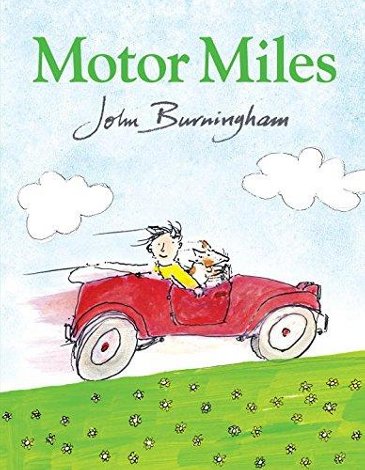 The holidays are nigh. I wrote this time last year about my favorite holiday picture book of all time – John Burningham’s Harvey Slumfenburger’s Christmas Present, originally published back in 1993.

I’m a big Burningham fan. (If you are, too, and you’ve not yet read this, run to your nearest bookstore or library.) And in thinking about Harvey, I was reminded that I’ve yet to write about this year’s Motor Miles, a new story from Burningham that was released in September of this year. It’s got everything Burningham fans love from his books, and it all adds up to the kind of charm only he can pull off. The starred Kirkus review for the book even notes, “No one does whimsy like Burningham; no one.” That pretty much covers it.

This is the story of a stubborn dog named Miles; the book is dedicated to Burningham’s own “difficult dog” with the same name. Miles barks too much, doesn’t like walks, doesn’t like his food, doesn’t like other dogs, and is generally obstinate. Alice Trudge and her son Norman love Miles anyway, and they know that what brings him the most joy is car rides “up the hill to the café”. Furthermore, at the café, he is fawned upon and actually behaves. Alice is torn, though, knowing she can’t take him up there daily in her car, just so that he’ll be happy. That’s when her neighbor, Mr. Huddy, builds Miles his own car.

What follows is utterly delightful for children, whether dog-lovers or not. That Mr. Huddy! He’s one cool dude. He builds a pretty fabulous set of wheels for the dog and even gives him driving lessons. This is a very funny spread: We see Miles in the driver’s seat, practicing his turns, even sticking out his paw for his left turn. There’s even a “Quick STOP!” moment, as he slams on the brakes. When Alice Trudge can’t take Norman to school one day, the dog takes him. BUT OF COURSE. All the children are amazed to see Norman pull up in a car with a pet dog at the wheel. The two take all kinds of trips together, and it’s here in a series of spreads that we readers are privy to one of my favorite things in all of picture book-dom: a full-bleed, double-spread John Burningham landscape – in this case, the seaside, the countryside, a snowy terrain, and a leafy terrain to boot.

All of this improves the dog’s mood, but as the boy grows older, he gets too big for the car and Miles stops driving. But no worries. There’s a surprise for readers on the last page, Burningham even leaving readers with a deliciously mysterious question as he does in Harvey.

One of Burningham’s appeals, as I’ve said before, is the spot-on child-like dialogue in his titles. And it’s more than just dialogue. It’s the way he gets so easily into children’s ways of thinking. Clearly, he is on their side. In 2009’s It’s a Secret!, when a young girl named Marie Elaine starts to wonder where cats go at night and then has her opportunity one night to find out when she spots Malcolm, her cat, dressed to the nines and on his way out the door, she doesn’t even blink. She begs to join him, and when he tells her that she’ll have to get dressed up, she does so. When he tells her “but you’ll have to get small,” she does so: “Marie Elaine got small, and they went out of the house through the cat door.” And that’s that. No explanation needed. What matters is that she got out and gets to see, indeed, what her cat does all night. I love this moment. There’s a similar vibe here: what child wouldn’t want to zoom around in a tiny roadster with her pet and wow all of his classmates? It’s terrifically absurd – and thrilling.

In looking back on the year 2016 in picture books, I know I will remember Norman’s hair flying in the breeze, as Miles drives him down the shore. In the next spread, Norman turns to look right at the reader, as Miles drives him by a lush, green meadow with cows grazing. It’s as if Norman is looking right at child readers, as if to say, I have it pretty great, don’t I?

Yes, in a John Burningham’s world, you do have it pretty great. By a mile.