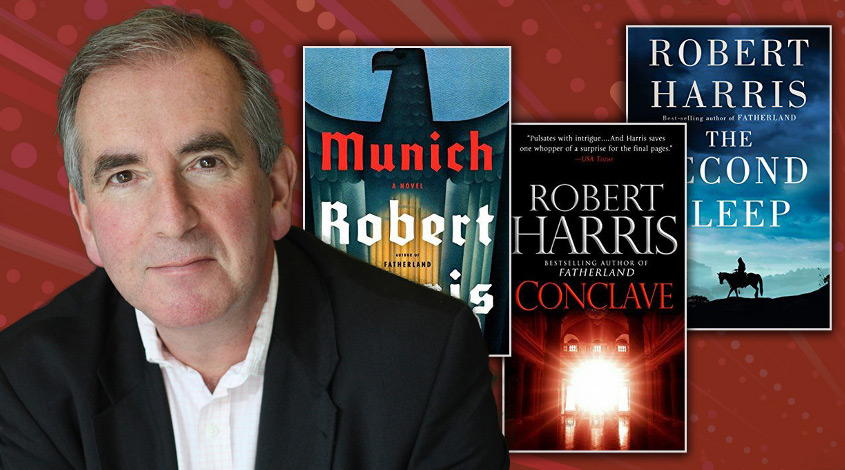 The best-selling British author Robert Harris is known as a thriller writer. His novels like Fatherland, set in an alternate past in which Germany has won World War II, and The Ghost, about a down-on-his-luck ghostwriter struggling with the memoirs of an ex-prime minister, are cases in point. Their narratives involve murder and suspense, action and danger, but many of his other works, although they don’t contain all those elements (at least not in a way we might expect), are billed as thrillers, read like thrillers, and are often reviewed as such. So the Times (UK) review of Harris’s most recent novel, Munich, which takes place against the backdrop of the 1938 Munich Conference between Neville Chamberlain and Hitler, calls the novel “a brilliantly imagined thriller,” while the Guardian review hedges its bets: “[A]gainst the intriguing backdrop of political machinations and brinkmanship is a thriller plot bursting to get out – though it doesn’t properly kick in until halfway through…” The reviewer later adds that “[the main characters’] escapades don’t quite work as a thriller in the context of a novel with such a determined fidelity to the facts.” None of this however, takes away from the propulsive quality of Munich or the sense that you are reading an unputdownable novel in thriller mode, or a clever version of one.

We get a clearer example of Harris’s “thriller-even-when-not” style in Conclave, a story about a cardinal charged with overseeing the election of a new pope in a centuries’ old closed-door process. Conclave made the shortlist for the 2017 British Book Awards in the Crime & Thriller category, yet as The Australian correctly notes, the narrative “refuses to take the form of a crime novel, it also defies thriller conventions.” Instead, Harris focuses on intrigue—and it is political intrigue in particular that drives this and his other narratives forward. His worlds are diverse, ranging from the Vatican (Conclave), to ancient Rome (Imperium, Conspirata, Dictator), Nazi Germany (Munich, Fatherland), turn-of-the-century France (An Officer and a Spy), and contemporary Martha’s Vineyard (The Ghost/Ghostwriter) but at his best, Harris employs a consistent storytelling technique. He hones in on a particular political intrigue or scandal, creates a fully fleshed-out, complex, and believable milieu in which the stakes of uncovering the truth behind the intrigue or scandal are high, and then sets into motion characters who, with or without a murder thrown in, are compelled to uncover that scandal. The narrative pattern is the same whether it’s Fatherland, which opens with a murder and a policeman and continues with more deaths, detecting and chases; or Conclave, which opens with the death of a pope and the mandate to convene an assembly of cardinals to select his replacement, and continues to ramp up the tension as the various candidates’ secrets spill out. Both produce a similar effect on the reader: you feel like you’re reading a thriller even when, in the latter case, you’re not. I kept wondering whether Conclave would morph into a more conventional crime novel—but I wasn’t disappointed when it didn’t.

Prior to writing fiction, Harris was the political editor for the Observer and a columnist for the Sunday Times and the Daily Telegraph so the political angle driving his narratives shouldn’t come as a surprise. His scrupulous research as he builds his worlds also shows—in preparation for his Roman trilogy he spent two years reading the 29 volumes of Cicero’s collected works as well as secondary sources. Although Munich may be hamstrung by its “fidelity to the facts,” Harris’s isn’t slavish about sticking to the historical record. He sums up his views on historical accuracy in an interview with The Guardian: “The truth is that my books are both extremely accurate and completely fantastical at the same time. I did a book about the Dreyfus affair [An Officer and A Spy] that was as close to documentary fiction as you can get, but I put it in the voice of a man who never wrote a memoir. It both happened and it didn’t happen remotely like that. That’s the pleasure of it.”

I would say that in Harris’s case it’s more than just the pleasure—figuring out the right narrator, deciding when and how to depart from the facts, all in the service of telling a suspenseful, crackling story—these aren’t casual decisions, they’re essential elements of his craft. His new novel, The Second Sleep, set in England in 1468, comes out this fall. I’m told it’s a thriller. I’m sure it will be one. Mystery/thriller correspondent Radha Vatsal is the author of A Front Page Affair and Murder Between the Lines.