Say Yes to the Dressmaker 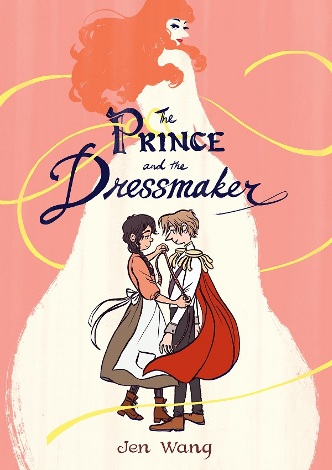 BOOK REPORT for The Prince and the Dressmaker by Jen Wang

Doesn't this make taking measurements look so romantic and even dance-like? (The close proximity, the bedroom—er, puppy-dog eyes... yeah, that checks out.) And of course, it's meaningful that Frances and Sebastian are standing in the shadow cast by the great Lady Crystallia.

Toiling away as a low-level seamstress, Frances creates a bold design that catches the attention of the Parisien fashion scene—and the eye of a mysterious client who hires her as their personal dressmaker.

Turns out, the client is actually royalty. Although not someone who would be expected to wear dresses. You see, Frances' client is Prince Sebastian, who quickly ascends to fashion icon status as Lady Crystallia. But even as Sebastian's alter ego becomes the talk of the town, Frances' dressmaking talents remain a secret. How much longer can Frances set aside her own dreams of greatness so that her friend can live out his?

Sebastian's sure of himself, too; it's just everybody else that he's worried about. After all, his parents are expecting him to find a bride, and society's expecting him to, y'know, not wear dresses. It might seem scary, but I'll channel one of the most inspirational women of our time* to encourage Sebastian to live his truth. Yes, there's a lot of pressure and scrutiny for royalty, but you also get to make your own rules because you're royalty. So, like, take advantage and BE YOUR AUTHENTIC SELF, BB.

*To this day, I still think of the "Oh oh oh oh OPRAH" theme song when I think of her.

Frances and Sebastian become fast friends, but the romantic love between them develops more gradually. It's fluttery and sweet and pretty dang adorbs.

Despite its historical setting ("at the dawn of the modern age"), the dialogue doesn't rely on Ye Olden Speech. (Which is probably for the best, since the characters would be speaking in French, so how would one go about creating French-based Ye Olden Speech but in English?) But the modernized dialogue didn't take me out of the story too much, since historical authenticity isn't its focus anyway—much like a Disney fairy tale set in Ye Olden Times.

Having only seen illustrations for In Real Life before, I was still instantly able to recognize the style as Jen Wang's. There's just something so distinctly cute about it, with perhaps only a slight exaggeration for the characters' big, expressive eyes. But the standout among the lovely artwork is, of course, THE CLOTHING.

OBVS. Each one of Frances' creations is a stunner that made me wish they were actual dresses. Now which IRL designer wants to get in on this and make them a reality? (Shut Up and Take My Money dot GIF.)

So why don't boys wear dresses, anyway? (By extension, why is it acceptable for a girl to act 'like a boy' but not the other way around?) Sebastian generally feels more comfortable in dresses than he does in princely regalia, in which case, YOU DO YOU, BOO.

Emile works for the royal family as some sort of butler/guardian/Alfred Pennyworth to Sebastian, and he's fiercely loyal to his young charge. As the only person other than Frances who knows Sebastian's secret, Emile is more than worthy of the prince's trust.

I know it's not all about appearances, but this book is sure cute to look at. And who wouldn't get the warm and fuzzies over a story about being comfortable in your own skin, public perception be damned, with a romance that exemplifies loving someone just as they are and making each other the best versions of themselves?

The Prince and the Dressmaker will be available on February 13th.