Seeing into Tomorrow with Nina Crews 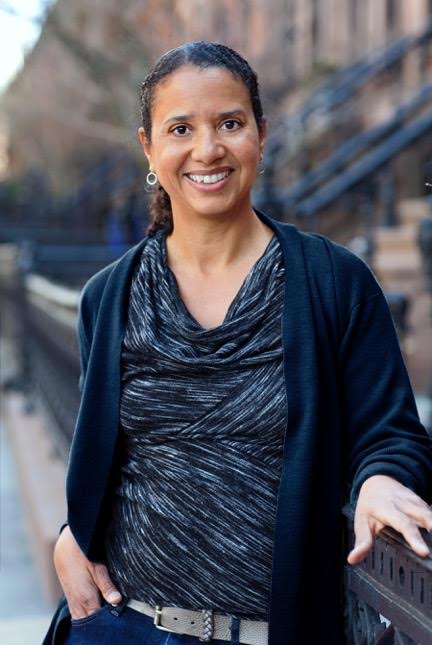 It may have taken a while for award-winning author-illustrator Nina Crews to come to fully appreciate the work of author Richard Wright, the famed writer of Native Son and Black Boy. But—as she explains below in an email discussion we had about her loving, reverent new picture book, Seeing into Tomorrow: Haiku by Richard Wright—she came to a deeper understanding of his pioneering work by way of his poetry.

Just before his death in France in 1960, Wright began writing haiku, and here Crew gathers twelve of his more than 4,000 poems. With photo-collage illustrations, laid out in beguiling overlapping frames featuring brown-skinned boys in nature, she brings some of Wright’s haiku to a new generation of children.

I interrupted some of her time with her pen and her camera to ask her about this book.

Jules: Hi, Nina! Thanks for talking with me about this book.

Nina: I’m so glad we are having this chat!

Jules: How did this project come to you? Were you already a fan of Wright's writing and familiar with his haiku?

Nina: I was not a fan of Richard Wright’s work when I began this project many years ago. I started thinking about illustrating his haiku back in 2006 after I came across a few of them in a poetry anthology. I had read Native Son and The Outsider in my twenties and had more or less dismissed his work as too polemical for my tastes. I was surprised and delighted by the poems. A quick search online led me to a posthumously published collection of over 800 of his haiku, Haiku: This Other World. In addition to hundreds of wonderful poems, this book included a terrific introduction that gave me a new perspective on Wright and backmatter that gave me a deeper understanding of this poetic form. Creating this book was an opportunity for me to reconsider my feelings about Wright’s work. I am now a fan.

I have always been a fan of haiku. The simplicity of the structure makes it very approachable, and I am delighted by the creative possibilities to be had within such tight limits.

Jules: Interesting. I'm curious: Did what you read and learn about him change your feelings, too, about those novels you read in your twenties?

Nina: Yes, my feelings have changed, although I haven’t reread either book. Let me speak a bit more about why I am now a fan of Richard Wright.

After reading other work—his autobiography, Black Boy, 12 Million Black Voices, and some of his essays—I gained an appreciation of Wright’s larger project. Throughout his writing life, he argued passionately for freedom for oppressed people. Native Son is a polemic, and that is really its strength and not its weakness. I don’t need to like it, and Wright didn’t want me to like it. He wanted to inspire social change. When I read that book, I was looking for a novel with clearer heroes and villains and, ideally, some redemption in the end. He didn’t write that book, and that is a good thing. Many have grappled with the legacy of Bigger Thomas, and if you read his essay “How Bigger Was Born,” he very clearly articulates what there is to be learned from this creation. Wright’s haiku inspired me look at more of his work and led me to better appreciate the choices he made in his literature.

Jules:That’s a powerful thing, especially for a poetry form that I think is often under-appreciated.

Can you talk about why photography was such a good fit for this, though I know you normally work with photography, as well as pictures of brown boys?

Nina: It is always very gratifying when one’s ideas reinforce each other while developing a project. Photography has been my chosen illustration medium since my first book in 1995. Photographs are very useful ways to depict observable facts in a relatively objective way, and this quality is well-suited to haiku. Photography is a particularly good fit for Richard Wright, because he was an avid photographer and collaborated with a photographer, Edwin Rosskam, for his book 12 Million Black Voices.

The choice to photograph African American boys for the illustrations is another example of ideas reinforcing each other. I thought a lot about Wright’s biography and how these poems might reflect his interior world. He felt a deep connection to nature and, to some degree, the boys are stand-ins for Wright. I enjoyed imagining how an average boy might be surprised by the sublime when they are least expecting it—while riding a bike in the woods, walking a dog or playing with toy soldiers on a hot day. Additionally, a thread that resonates through much of Wright’s writing is the struggle of any individual to be acknowledged as particular and special. To that end, I photographed 12 boys who could broadly represent the variety within African American people and to celebrate the diversity within one “group.”

Jules: And is that your father [legendary author-illustrator Donald Crews] in the "empty railroad tracks" spread?

Nina: Yes! That is my father in the railroad tracks spread! He is posing with my son.

Jules: I love the overlapping images here. The Kirkus reviews notes: “[These] images fragment the landscapes but never the humans depicted, underscoring the longevity and permanence of the African-American people.” I don’t know who reviewed that, but they have good observation skills. It looks like it would be a complicated thing to digitally manipulate these photos the way you did, but then I’m not an artist. Was it hard? I can’t recall that you’ve done that (in particular) in any of your previous books, but then I might just be forgetting something?

Nina:I haven’t used this technique before. I wanted to try out something new and felt that the fragmented images created nice movement and interesting shapes. I took multiple pictures of each scene by framing small parts as I photographed. This meant that perspective, exposure, and focus shifted slightly in each section of the scene. I downloaded the images and reassembled them in a layout program. It was a bit like doing a jigsaw puzzle. Sometimes, I found I was missing a “piece,” but that wasn’t really a problem. Changes in gaps, focus, and exposure all added to the sense of movement that I was looking for.

Jules: I like the book's closing invitation to children to "look around" and use their senses and write some haiku. Have you used this with children in school visits yet? Or do you hope to—and how do you hope educators will use the book in classrooms?

Nina:  I haven’t used the book in school visits yet, but I’d love to incorporate some haiku-writing in my school visits. Haiku is such an accessible form of poetry and a great starting point for young writers. I begin the book by speculating that Richard Wright’s first word might have been his name. This is followed by the first haiku, showing a boy writing his name in the snow. My hope is that young readers will identify with the everyday scenes in the book and that educators will encourage children to write haiku, based on their own observations and experiences.

Jules: As a big reader myself, I always like to ask authors—and I also ask this in the spirit of the wonderful "Further Reading" section that closes Seeing Into Tomorrow—what books are you reading now (or you have read recently), either for adults or children, that have fired you up and/or that you'd recommend to others?

Nina: Well, I don’t know if it’s everyone’s cup of tea, but I just finished a book I found fascinating —Color: A Natural History of the Palette, written by Victoria Finlay. The author chronicles her investigations into colors—how they are created and stories attached to them. At the same time, I read a novel by Haruki Murakami, called Colorless Tsukuru Tazaki and His Years of Pilgrimage—a funny title coincidence and also a good book. I’m reading a lot of poetry at the moment—The Selected Poems of Nikki Giovanni and the collected poems of Rita Dove [Collected Poems: 1974-2004]. I recommend those books, as well.

Thanks for taking the time to chat about this beautiful book, Nina!

Nina: It has been great chatting with you.