The Singularity Is Near 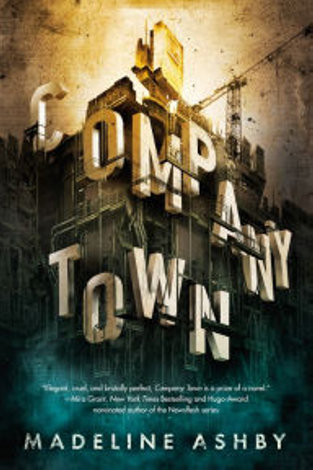 New Arcadia, a city-sized oil rig of many self-sufficient towers and dark secrets.  Standing off the Canadian coastline, in a near future where most people have bio-engineered enhancements and the very wealthy family Lynch owns everything, the town that was once on the brink of collapse after an explosion that killed a lot of riggers is now ready to start over under the new developers.

Enter Go Jung-Hwa, a bodyguard with the United Sex Workers of Canada and one of the few people who is not bio-enhanced. When out on a recent job, she interacts with a high-up operative at Lynch Ltd. who not only recognizes her skills—Hwa is a master fighter—but also realizes that not being enhanced means that Hwa cannot be hacked or traced, which makes her a great asset.  They make an offer she can’t refuse: to become the bodyguard of Joel Lynch, the 15-year-old heir to the Lynch dynasty.

Hwa’s new job involves training Joel in self-defense as well as protecting him from a death threat that may or may not be coming from the future.  But when Hwa’s friends start getting gruesomely murdered, her attention is divided between the two seemingly unrelated threats. Until they converge.

A futuristic murder-mystery thriller that mixes singularity, time travel, romance, and science fiction, Madeline Ashby’s Company Town is a heady, exciting novel that balances well the deeply humane and the futuristic setting. The latter is well realized: it’s easy to imagine a future such as this, with the bio-enhancements, the technology, the growth of power that is connected with those as well as the marked differences in how one interacts with the world. The head of the Lynch family, for example, wants to live forever, believes deeply that the Singularity is going to happen, and this is part and parcel of this story, and wholly believable too.

This story involves a closer look at what it means to be poor in a world such as this because Hwa’s lack of bio-enhancement is not by choice. Those and many other threads are woven around her, and there is even space for her relationship with both Joel and with her boss Daniel to grow and develop, albeit in different ways.

The novel’s major flaw is its ending. The climax, involving the Singularity and Hwa’s singular (ha!) effect in the future of the Lynches as well as all the other different threads that the novel has, felt a little bit rushed, a little muddled and a little contrived. Furthermore, I am not entirely convinced that the ending is plausible: how can one beat an invincible villain that can always come back?

In spite of this, I truly loved this book and remain enamoured with Hwa—I felt hard for her, and felt every blow she received, celebrated every victory she had. Company Town is well worth a read just for her.