In Space, No One Can Hear You Become a Zombie 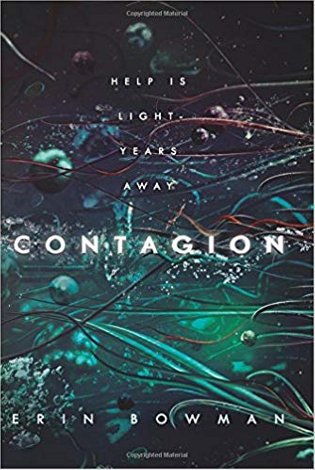 Space is a dangerous place, and yet there’s something appealing about the unknown vastness of the universe, something compelling about planets and moons that dot the deepest parts of distant galaxies. The brave souls across the canon of sci-fi who choose to explore and live in these inhospitable places often meet disastrous ends, usually at the hands of vicious native microbials or hostile aliens.

In Contagion by Erin Bowman, it’s the former fate that befalls our main characters. In this particular science fictional society, the universe runs on corrarium—a mined energy source that is powerful and incredibly rare. Hevetz Industries is a conglomerate that is the universe’s single largest supplier of corrarium, and has recently found a rich vein of it on a distant planet, Achlys, with a grim past. Decades earlier, Hevetz tried to mine corrarium on that same planet, ending in the entire outpost colony dying, save for one small child as the lone survivor. When Hevetz research ship the Odyssey receives an SOS from the new colony, the ship’s young captain, Dylan, is eager to prove herself and takes her seven crew members to answer the distress signal: Lisbeth, a universally renowned scientist (who happens to be the sole survivor of the previous incident), her intern Thea (the main character of the piece), brilliant young ex-military pilot Nova (who has a thing for Dylan and a chip on her shoulder), ship mechanic Sullivan (who also happens to be Nova’s uncle), and engineers Toby and Cleaver.

What awaits the crew planet-side is a slaughter. Most of the miners are missing from the habitation sections, but the bodies that remain are dead, bloody, and eviscerated. Instead of turning around and waiting for backup from Hevetz, Dylan stubbornly orders her team to press on with the rescue mission, searching for any sign of survivors (her father, hopefully, among them). The only survivor they find, however, is a teenage boy—one who may not be as innocent as he seems. The miners discovered something in Achyls’s depths; something that changed them. Doctor Lisbeth’s past may hold the key to understanding what befell the colonists—and may be the only hope the rescue party has to get off the planet alive.

A smartly paced science fiction horror novel, Contagion is the first book in a duology following the fate of these survivors. Told through alternating point-of-view chapters narrated by Thea and Coen, the novel builds tension around the mystery of Achyls’ miners (not really a spoiler: they became infected space zombies) and the choking realization that the rescue mission was doomed from the outset. There’s a bit of a medical/scientific mystery here too, as Thea is focused on understanding the why behind the colonists’ infection, and she fears, quite rightly, that her mentor, Lisbeth, is hiding some core piece of knowledge from the group. Contagion is most effective in these high pressure situations, putting its openly flawed and terrible characters under immense strain and gleefully watching the bad decisions they continue to make (ahem—DYLAN, you are the worst).

Reminiscent of Aliens (that’s the second movie, the James Cameron one) and Gemina (the second novel in the Illuminae chronicles from Jay Kristoff and Amie Kaufman), Contagion gets the job done.

And the best part? Book 2, Immunity, is out next week.